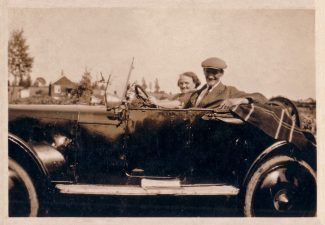 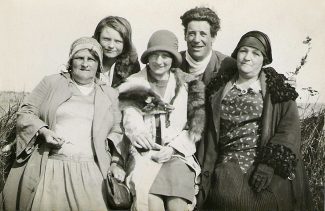 zoom
Neighbours. Elizabeth Richards & daughter Violet from Sunnymead on the left. My Grandma, Amy Burton from Spion Kop on the right with one of her older sons and his wife in the middle. Amy's youngest son George (not shown) was my Dad.
Michelle Collier. 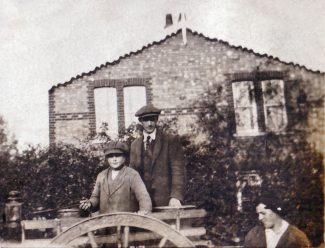 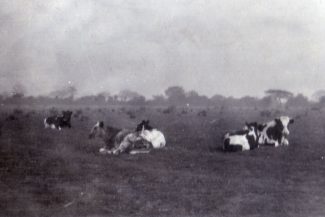 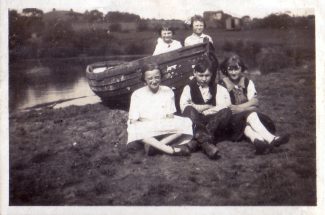 zoom
The boat and the pond in the field along side the farm. Rose Richards front left, Jimmy Richards in the middle, Lizzy Richards front right. Viley Richards back left, back right - unknown.
Denise Hamilton. 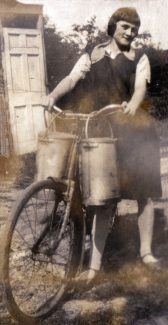 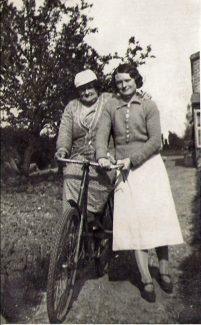 zoom
Elizabeth Richards Snr and Jnr at the side of the farmhouse.
Denise Hamilton. 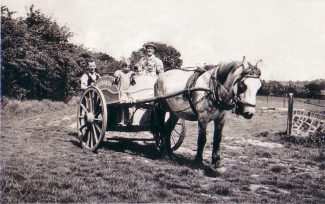 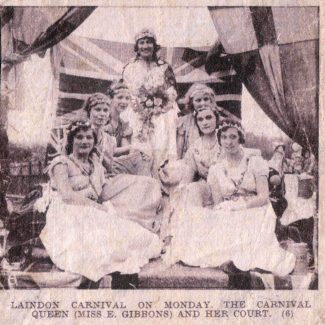 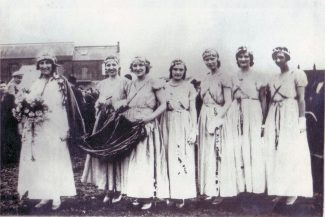 zoom
Laindon Carnival Queen and Princesses. Lizzy Richards in the middle. Not sure of the hall in the background.
Denise Hamilton. 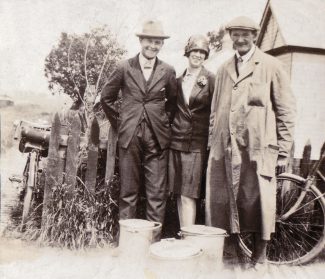 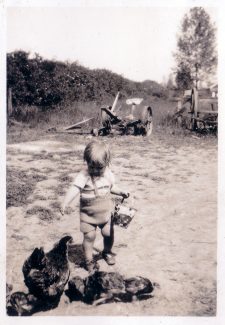 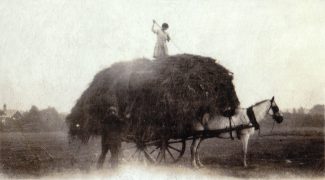 The Richards’ family and my Grandparents Henry and Jessica Devine (née Clements) came from Bethnal Green.

Therefore, the two families were connected in more ways than one, making the three children of James Jnr. and Maria Richards (Sylvia, Jimmy and Hilda) my second cousins (Maria was affectionately known as Sissy Richards).

The Richards family moved to Laindon in 1919 and settled into the farmhouse called ‘Sunnymead’ and run a dairy farm.

In 1923 my Grandparents, Henry and Jessica Devine, moved to Laindon with their three children, my mother, Jessica aged almost 9, and her younger brothers Richard and Harry. Initially, they lodged at the farmhouse while waiting to move into their own bungalow close by called ‘Pendennis’.

One story I was told, happened while Nan was lodging at Sunnymead.  My Nan and James Richards were sitting in the kitchen looking out on a field where there were a herd of young heifers, when it started to rain heavily. James said (in his Bethnal Green accent), “I suppose I’d better go and get those ‘little ‘effers’ in”. My slightly surprised Nan replied, “Why do you call them that – what have they ever done to you?”

The family had a boat which they used on the huge pond in the field along side the farm.

Another story came via my Mum Jessica who had to walk through the farm on her way home from Dunton school each day.  Apparently, one particular cow (co-incidentally also called Jessie) took a dislike to her and would charge towards her when she walked through the field, so mum had to run very fast to reach the gate.   The Richards’ children had a swing hanging from a tree in one of the fields. One day my Mum was enjoying swinging very high, back and forth, when Jessie the cow, who was far away across a couple of fields, spotted my mum and started galloping towards her. Mum panicked slightly as she desperately tried to slow down her swinging activities by scraping her feet on the floor, so she could jump off and run quickly to safety before Jessie got too close. Thankfully, she just about managed in time.

My sister Anne told me that when she and second cousin Hilda Richards were children, they used to go roller-skating in one of the cowsheds. Apparently, there was a long strip of concrete running the length of the shed and a rope hanging from the ceiling. They would hold onto the rope to pull themselves along.

Jimmy Richards Jnr and my Dad George Burton were good friends since boyhood. Dad came to Laindon each weekend with his family who had owned a plot and wooden bungalow close to the farm since 1915, originally called Honeysuckle Hall, but was later changed to ‘Spion Kop’. My Dad George married my Mum Jessica in 1930.  Jimmy Richards married Maria Clements in 1931.

Rose Richards married Thomas Whitehead and lived in Rosedene next to Pendennis.

Anne told me that she and our brother Dennis once had a ride across the top field in one of the Richards’ horse and carts. The horse was called Stevie and Dennis was allowed to have a go at driving under Tommy Whitehead’s supervision.

By the time I came along, the Richards’ family were no longer at the farm but were living in various other parts of Laindon.

However, I often went ‘down the farm’ to play with the children of the various families that lived there. I even went to one or two of their birthday parties. I remember the stream that ran in front of the farmhouse with the little wooden bridge we had to cross to get into the front garden.

After my Nan moved away from Pendennis approx. 1958, our nearest neighbours were the Whitehead family of Rosedean. I was particularly friendly with the twins, Norman and Rosemary who were two years younger than me. Very sadly, Rose died in the late fifties and her daughter Rosemary went to live with her older sister Margaret. Norman stayed with his father and older brother Bryan.

Tom Whitehead remarried a few years later to a very nice lady called Lil. I soon became friendly with her daughter Jean. Around 1963, Jean  took me to visit her grandparents, Sidney and Annie Day, who lived in a bungalow called ‘Sekaon’ in Helmore Crescent.  I remember walking around the back unmade roads passing by all the plotland bungalows on the way.

My mum became good friends with Lil but hadn’t realised that she was an identical twin until we played a trick on her. Lil and Jean came to our house one day and mum showed Lil into our living room. Lil’s identical twin sister, Vera, waited outside until my mum went back into the kitchen and then Vera walked in. My mum was completely taken aback as she thought Lil was already inside. Jean and I started laughing and explained that this was Vera, Lil’s identical twin. The trick had worked perfectly and caused much merriment.

My younger brother Alan and Norman Whitehead shared an enthusiasm for tinkering about with old scrapped cars. They collected several, and kept them in our garden, got them working and drove them around the field just for fun. One was an old Austin, which would have been a collector’s item now if only it had been preserved.

I remember the day Norman was given an old wind-up gramophone and stack of 78” records by a rag and bone man. We spent the afternoon playing the records and laughing at some of the old songs. One in particular I remember was the Billy Cotton Band with Alan Breeze singing ‘Just an old beer bottle’. We played it over and over because it made us laugh – even more so when the gramophone needed winding up!

The Whitehead family moved away to a new house in Lee Chapel North around 1966. We said our goodbyes and I watched with sadness from our window on the day they moved out as they had been so much a part of my childhood. I would miss many things, including the familiar hum of Tom’s saw bench on summer days as he prepared logs for storing for the winter. However, I wished them all the very best for the future in their new home.

The semi-detached farmhouse, Sunnymead and Southview, which had been occupied by various families from time to time, was finally vacated in the mid sixties and stood empty. My younger brother Alan and I took a walk there and wondered through the empty rooms which were once alive with activity and the sound of children’s laughter. We were very much aware that the building would not be standing for much longer and although we were just teenagers witnessing the end of an era, we felt privileged to have been a part of it, if only for a few years. These days, I like to take an occasional walk around the area and remember.

In recent years, I have been in contact with Lizzy Richard’s granddaughter, Denise Hamilton, and Hilda Richard’s daughter Michelle Collier, who provided me with the photographs and their kind permission to use them. I would like to thank them both very much.

In the early fifties Laindon was still very much a farming area.  On the east side of our garden where Bourne Close now stands, there was a large field which we called Buckenhams. I remember that field being ploughed by a man using a horse and plough (not a tractor). My Dad apparently knew him as they would chat across the hedge while the horse stood waiting patiently.

The field to the south of our garden was known as the ‘Top Field’.  There was a well worn track across the middle which was used as a short cut in the summer to avoid walking the boards, the grass grew very long on either side. In August a man and wife team would arrive with a tractor to cut the grass. I used to like watching as they zig zagged across the field. They both sat on the tractor but the woman drove as her husband was blind. I believe they came from Billericay. From the mid fifties onwards, the field was used for other things. Pigs at one time, when an electric fence was fitted around the field. Followed by young rose bushes when Tinnaman’s nursery used the field.

The fields to the west of our garden each had a pond, and therefore we knew them as the first pond field, second pond field etc. Some years before Fords started to build there, I remember watching a shepherd herding a flock of sheep in the very far field.  He had a crook and a whistle which he used to give instructions to his border collie. That’s hard to believe now – a bit like a far away dream. But it was real and I am so glad that I’d sat at our window watching the little black and white dog darting around the field.