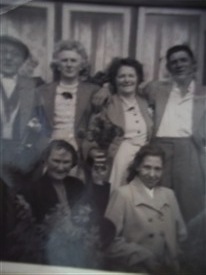 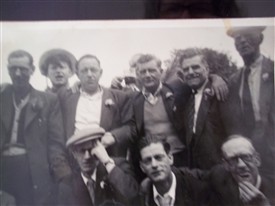 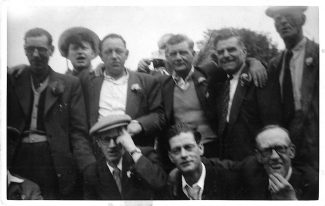 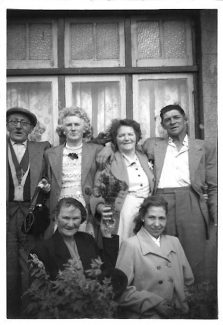 zoom
Nan and Grandad Davies and family outside Lilac

In my last article to you I introduced myself, now I would like to take you back to my pre-school years in Laindon. Please forgive me if anything is not quite as you remember.

As I have said I was born in Laindon in 1942. My first memories are of my father returning home from the war. He bought home (what now seems like a big sack but I expect it was just a bag) of chocolate. This was shared with all the kids living nearby. Also for me and my mother’s younger sister who was only 11 months older than me, a white fur hat and muff (they came from Norway, this is where he was stationed in the war). My mother must have felt so chuffed walking us down the High Rd. We must have been the only kids to have real fur muffs in our village.

The war was just over and everyone was feeling a sense of relief to have (the ones that made it) their loved ones home. My mother met my father in the Laindon Hotel, he was stationed at Langdon Hills and originally came from Paddington, London. Langdon hills camp became a prisoner of war camp. I recall the local ladies would take pies etc. for them and then in return they would make wooden toys for us kids. I recall my brother having a train and I had a doll with a loop on its head you could put a ribbon through. One wartime memory (my mothers not mine).  Perhaps someone could clarify that a German plane was shot down near the Cottis bakery and the pilot was rounded up by local women and their frying pans (even if it’s not true it’s a memory I cherish and it will always play a part in my early childhood).

My little brother Fred was just one year old when we were allocated a two bed prefab in Worthing Road. These I think I am right in saying were given to us by the Americans for British servicemen with familes for their war effort. I remember our prefab was so comfortable we had a real bath and a gas cooker all mod cons in those days. Before this we had lived with my nanny and granddad in “Lilac” Beatrice Rd,a three bedroom bungalow.

Next door to us were Mrs. Daisy & Mr. Jack Davies, and their eight children. Mrs. Kitty James, her daughter Kitty later went on to own the Winston club with her husband Ted.

Mrs. James lost one of her daughters in the war and my grand parents lost a son They are buried side by side in St.Nicholas church. Mrs James and my granny tended their graves for as long as I can remember. Now my Aunty Marion does it. I hope one of my cousins that are still local will carry on.

“Lilac” Beatrice Road has many childhood memories for many a child and an adult Toomy’s wedding reception was held there, also our first sons christening reception. Now its gone replaced by other houses with families as happy as we were I hope.

I will run though my Mothers siblings, I’m sure I will jog a few memories. My mother was Violet Davies. She married Fred Sewell, nicknamed Nobby, a popular singer in the Winston club. Next, uncle John, I didn’t get to know him much as he was killed in the war in 1943. Next was my uncle Bobby Davies. He did quite a lot of building work locally. He married Vera Turner the girl next door. In fact they lived next to us in Beatrice Rd. Vera had two sisters, Mavis and Sylvia. They both married local lads and still live locally. Vera & Bob had one daughter, Lynn. I wonder if anyone remembers our Lynn pushing her pram with her pet chicken in it. It went everywhere with her and it even wore a bonnet. This would have been in the fifies. I do hope someone remembers, as a lot of people used Beatrice Road to cut through to the station from Berry Lane.

Next was Aunty Eileen Davies. She was in the ATS during the war. She married a local lad Joe Jones. He was in the air force when they met and they lived in Northumberland Avenue in one of the long wooden bungalows. I think as your family grew you just built another room on. I know her mother in law lived at one end and they lived at the other end.

Opposite them in the avenue there were the old railway carriges people had made into houses. They were so cute I wonder what happened to them.

After Eileen came my sweet aunty Betty. She married a local boy Harry Simmons. They were quite a large family. Harry, Georgie, Terry, Peggy. I think there were a couple more but who could ever forget dear Johnny Simmons. He was a very special boy who needed some extra care. He would always be out with his brothers and would love to chat for hours with whoever wanted to listen to him, bless him dear John.

Then came my uncle Ken. Now read this carefully or you might lose track.  Aunty Eileen’s husband Joe had been married before and he had a daughter Norma Jones. They met and fell in love at her dad’s wedding to my aunty Eileen, Ken’s sister. They wed so that made my aunty Eileen Norma’s step mum as well as her sister in law and made uncle Joe uncle Ken’s father in law as well as his brother in law and aunty Eileens brother was also her son in law (deep breath) and I will carry on, this could only happen in my Laindon.

Uncle Ken did his apprenticeship as a motor mechanic at Parkinson’s garage. He later went on to open his own workshop at the back of the old fotune of war, what was it called? You guessed it “Kens Autos” does anyone remember him there?

Then came my aunty Marion. We were always very close. She was the one I always wanted to be like. She married Patrick Burr. He ran a ground working company in Laindon. I can still see his big eight wheel tippers trundling through the High Rd. Aunty Marion belongs to a local running club (I think it’s the Striders) and in her late sixties she ran the London marathon and has the medal to prove it. She still at over 70 runs locally for charity I am so proud of her.

Last but not least there was my youngest aunt Pat. There was only 11 months between us so we always did a lot together. Pat married John White. He was not local so she moved from the village quite a few years ago but we still keep in touch. That’s a rundown on the family but you haven’t got rid of me yet. After a cup of tea I will be back to finish this early part of my life in my Laindon.