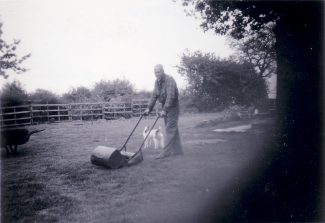 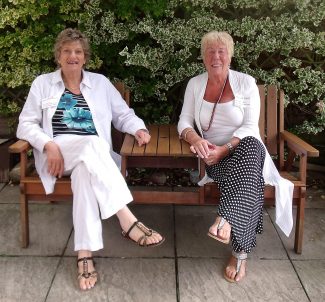 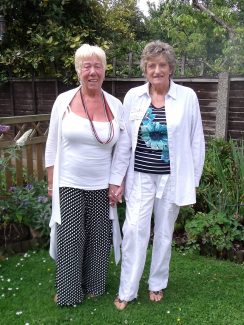 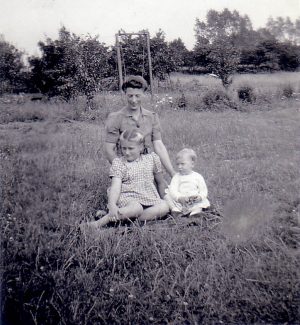 zoom
Me with my mum Jessica and baby sister Nina. Photo taken in 1947, the front garden of Spion Kop about a year after I met Sylvia. Artillery View was just behind the Poplar trees on the right side of the picture.
Nina Humphrey 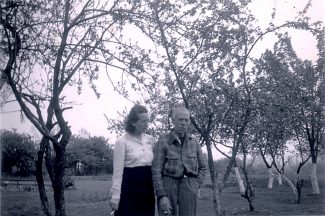 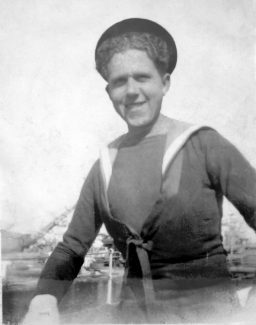 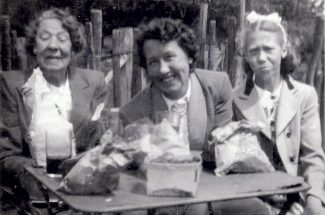 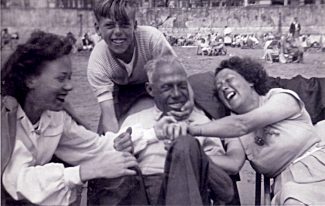 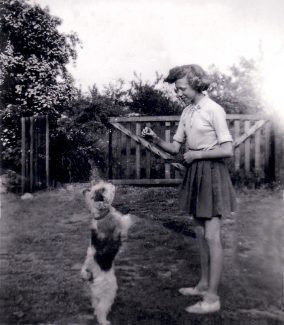 I first  became aware of the bungalow “Artillery View” when I met its youngest occupant in 1946 when we were both 7 years old. I was in Laindon High Road, shopping with my Gran (Jessica Devine) outside Sizer’s the butchers one morning. My Gran greeted a lady who turned out to be Mrs Anne Short, accompanied by her little daughter, Sylvia.  Sylvia was attracted by my doll’s pram and she told me afterwards as soon as she saw me she wished she knew me so we could play together and that is just what happened.

A friendship sprang from this early meeting which lasted all our school lives, although as often happens we rather lost touch after leaving school, just bumping into each other occasionally and I then moved to Norfolk in 1965. We met up again through Friends Reunited just a few years ago. Sylvia was a lovely little girl with gorgeous, curly, auburn hair. She had a vivacious, friendly nature and we sometimes got into scrapes, not really bad ones, just a bit mischievous. A whole gang of us got into trouble once when we played on the farmer’s newly mown hay.

The Short family of “Artillery View” were among our closest neighbours. If, that is I climbed through the hedge at the southern boundary of “Spion Kop” onto the top field and ran up the path to a line of huge poplar trees. Situated the other side of the poplar trees was “Artillery View”, whose front faced north overlooking Buckenham’s cornfield, where Bourne Close now stands.

The bungalow was owned by Sylvie’s family and originally used, like many others, as a weekend retreat. The family had come from Bethnal Green to live permanently in Laindon after being evacuated to Somerset during the war. In 1946 the family consisted of Mr William (Bill) and Mrs Anne (Annie) Short and their five children, Billy, Rene, Joan, Roy and Sylvie. Roy was two or three years older than Sylvie, and therefore a schoolboy, but the older three seemed to me to be grown up; Bill being in the navy and Rene and Joan out to work. Roy kept pigeons and I believe still does.Sylvie’s grandparents, Albert and Clara Wilkins lived in Seabright Street, Bethnal Green. The older children; Rene, Billy and Joan were evacuated to Somerset during the first part of the war. The house in West Ham where they were living was bombed so mother Anne, together with Roy and the baby Sylvie joined them in Somerset and lived there for 6 years, father Bill being in the army. He said he would desert if they didn’t go. Whilst in Somerset Mother, Billy, Rene and Joan all worked on a farm whilst Roy and Sylvie just played. Sylvie can remember riding on the trailer going to the fields whilst the adults picked peas and other crops.

“Artillery View”, a stonedashed wooden bungalow was a nice looking one, somewhat superior to the usual plotland dwelling and very neat and tidy. In fact Sylvie’s mother, Annie kept their four roomed home in immaculate condition, even unto the dunny, which impressed me no end, as it always looked like it had been freshly whitewashed and scrubbed out. They even had real toilet paper instead of the squares of newspaper on a string, suspended from a nail like the rest of us.There was a vegetable garden and fruit trees and Sylvie’s father Bill, had a lovely garden filled with giant dahlias.  Like most people, they kept chickens. Sylvie’s first dog was a brown & white mongrel called Judy who was run over in Laindon High Road.Then there was a wire-haired terrier called Floss and a red setter called Roma and later a German shepherd called Keesh. When Sylvie was a teenager, she had a horse called Blondin, which was stabled along Noak Hill Road. One day Blondin wandered away from “Artillery View” and made his way to “Spion Kop” and I was delighted to lead him back again.

When I met Sylvie four years ago after many, many years she had hardly changed and she still likes horse riding.

On Summer evenings we used to play on the top field and beyond, with neighbouring children and when is was time for Sylvie to go home, her sister Joanie would stand at the gap in the poplars and yell “Syl-VEEEEEE” which carried on the air like the shriek of a banshee and we would all know it was time to go home, grubby, covered in gnat bites, tired out and ready for bed.

The official way to “Artillery View” was via Devonshire Road. If you went up King Edward Road and turned right onto Devonshire Road and walked along, you would come to an unadopted area on the left, with a path, which lead to the bungalow. It puzzled  me as to how the bungalow got its name but my Dad (George Burton) told me that historically, when the army had to travel from Colchester to Tilbury, the route they took brought them very close to the bungalow and this, apparently is why it was so named. There certainly was a right-of-way alongside, which continued past ‘Clemrich’ (later re-named Tre-Pol-Pen) and along the back of the bungalows in Devonshire Road which, according to my brother (Dennis Burton) would take you to Laindon railway station if you followed it.

Sylvie was in the 1958 train crash. Fortunately the worst injuries that she and her fellow travellers suffered were black eyes as they were thrown forward by the impact but they were very shaken up.  It was so traumatic that she can’t remember who was in the carriage with her but they scrambled up the bank; eventually got on another train (which understandably terrified Sylvie) and made it to Billericay and thence home. I can remember reading Sylvie’s account in the local paper, where she said she had been terrified at the thought that the carriage might tip over. Unfortunately, some other people didn’t get off so lightly, as has been related in other articles.

Eventually Sylvie’s brother Roy married Jacqueline Stapleton, who was slightly connected to my family by the fact that her father’s sister was married to my father’s brother, so we had an aunt, uncle and cousins in common (Auntie Flo’, Uncle Cyril and James and Alfred Burton).

Sylvie married James Richards, remember Richards Dairy?, my second cousin. They had 3 children, Tracey, Cheryle and Jamie. There is something cosy about the inhabitants of close-knit neighbourhoods being connected/related.

It is a huge regret of mine that I have no photographs of “Artillery View” and no photos of Sylvie at all. However, Sylvie herself has provided some of her old photos and therefore it is thanks to her that I am able to have a photographic record to accompany this article and thanks once again to my sister Nina for her help in putting them on. Thanks also to Sylvie for filling in one or two blanks for me.

Sylvie has very happy memories of her childhood in “Artillery View”.  Like all of us, things that we take for granted nowadays were sometimes in short supply and the winters could be harsh, especially in the winter of 1947 and the big freeze which started the third week in January and carried on for six weeks into March. The snow was incredibly deep, it drifted, covering the hedges and then froze solid, making it possible for us to walk along the top of the hedges and it was the only time we were ever allowed to skate on the pond at ”Spion Kop”. It was perhaps the healthy innocence of those times, which will never come again, that in retrospect make us realise how lucky we were.

PS:  Any reminiscences of my childhood must contain references to Sylvie. Therefore she appears in all my memoirs to date.