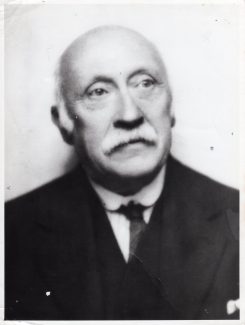 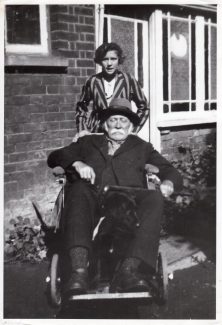 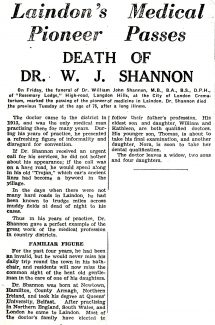 On Friday, the funeral of Dr. William John Shannon, M.B., B.A., B.S., D.P.H., of “Rosemary Lodge,” High Road, Langdon Hills, at the City of London Crematorium, marked the passing of the pioneer of medicine in Laindon. Dr. Shannon died the previous Tuesday at the age of 76, after a long illness.

The doctor came to the district in 1913, and was the only medical man practicing there for many years. During his years of practice, he presented a refreshing figure of informality and disregard for convention.

If Dr. Shannon received an urgent Call for his services, he did not bother about his appearance; if the call was on a hard road, he would speed along in his old “Trojan,” which car’s ancient lines had become a byword in the Village.

In the days when there were not many hard roads in Laindon, he had been known to trudge miles across muddy fields at dead of night to his cases.

Thus in his years of practice, Dr. Shannon gave a perfect example of the great work of the medical profession in country districts.

For the past four years, he had been an invalid, but he would never miss his daily trip round the town in his bath-Chair, and residents will now miss the common sight of the bent old gentleman in the care of one of his daughters.

Dr. Shannon was born at Newtown, Hamilton, County Armagh, Northern Ireland, and took his degree at Queens’ University, Belfast. After practising in Northern England, South Wales, and London he came to Laindon. Most of the doctor’s family have elected to follow their father’s profession. His eldest son and daughter, William and Kathleen, are both qualified doctors. His younger son, Thomas, is about to take his final examination, and another daughter, Norah, is soon to take her dental qualification. The doctor leaves a widow, two sons and four daughters .