"The dangers of cross infection." (Continuing the theme of "how is it you became a Laindoner?") 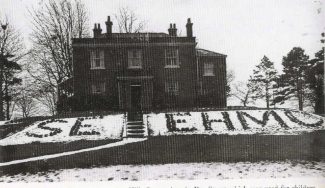 It was not only individuals or families who fell under the spell of seeing the Laindon area as a potential suitable environment in which improvements to the health and well being of the community might well be achieved. Not withstanding the difficulties that both the supply of fresh water and of the disposal of sewage might represent for individuals, large organisations had little difficulty in dealing with such problems.  In one regard, at least, the Landon area and its environs certainly had plenty of fresh air and with changing attitudes in medical circles, with time, this worked in Laindon’s favour.

For centuries it had been recognised that part of the answer to infectious disease had been isolation. This had led to the establishment of what were known as “pest” houses into which persons bearing the obvious markings of disease or illness could be shut away until either they got “better” or were overtaken by death.  What was not recognised for a very long time was that what was obvious by virtue of being a visual symptom often concealed the fact that the victim of disease was just as infectious to others for a varying period before the visual signs became apparent. It was only after 1710 in the UK with the introduction of Quarantine laws for visiting ships that what is now recognisable became clear and the slow march towards improvements in medical treatment had begun.

The century that saw the recognition of the dangers of cross infection was also the century that gave rise to the recognition of the value of vaccination or inoculation. The fight against the scourge of smallpox begun by Jenner in 1776 was the introduction to the concept that the human body could, with assistance build up an immunity against disease although it was not immediately obvious why this was so and a political movement against such apparently unhealthy practices caused a backlash against vaccination, persisting until such time as the fact that so much disease was transmitted by tiny organisms invisible to the human eye had bee clearly demonstrated. Nevertheless, the value attached to the isolation not only of recognisable victims but also those who were considered to be at risk had become apparent and from 1863 onwards, another great scourge of the human race, particularly that part of it that lived in overcrowded cities, Tuberculosis or TB, led to a movement of a healthy form of isolation in “fresh” air as a means of combating that disease’s effects.  By the beginning of the 20th century this movement had proliferated to the extent of creating a whole complex of sanatoria throughout the British Isles, accompanied by the widespread use of “open-air” schools by the children of both known and possible victims as a preventative measure.

One such municipal authority that entered into this arrangement on behalf of its citizens was the Borough of West Ham in east London. Having had initially constructed a Sanatorium on the banks of the River Beam at the Leys in Dagenham for the benefit of its adult TB victims, in 1927 they acquired Wootens Farm in Dry Street, Langdon Hills on the lands of which they had constructed a children’s TB sanatorium. This hospital’s 40 beds remained in use until 1957 when, following the introduction of antibiotics and the rigorous control over the production and distribution of cow’s milk meant that the need for such establishments had considerably declined.

Along very similar lines, although the isolation process seems to have been directed more to achieving the social exclusion of destitute males from society rather than any risk of cross infection, was the acquisition of Sumpners Farm at Dunton by the Poplar Board of Guardians who had created the Dunton Farm Colony, a process described at some length elsewhere. Here, at Dunton, every effort was made to protect the integrity of the actual farm as a viable agricultural unit by training the inmates up in farming matters although how successful this proved to be remained debateable following complaints about absconding inmates. Although in the case of the conversion of Wootens Farm to an isolation hospital, it was hardly expected that much use of the farmland it replaced would be maintained, there is some evidence that matters horticultural were not neglected in the change of use. Well stocked flower beds were maintained and earned frequent admiration, and in 1941, in the light of the British Government’s “Dig for Victory” campaign, the gardener at the sanatorium is reported as delivering a lecture to the members of the Laindon and District Horticultural Society on the best way to cultivate tomatoes. Thus might suggest that there was a degree of self-sufficiency in vegetable production being practised at the hospital as well.

These examples of the contrast between the use to which the apparently redundant farm lands of Laindon were being put where indicative of a somewhat ambivalent attitude that prevailed throughout the whole period of the “Plotlands” era. Although once acquired by the land or estate agents potential roads and building plots were marked out leading to the complete obliteration of farms like that of both Great and Little Gubbins, if there appeared to remain the slightest chance that the integrity of a farm could be retained then it was with the result that when the parishes later fell within the area designated for Basildon New Town, compulsory purchases were possible of sizeable tracts of land. Examples of this were Brewitt’s Farm off Basildon Road, most of which formed the bulk of Gloucester Park, and Lee Chapel and Castlemayne Farms in Lee Chapel, although the two latter farms were predominately only involved with the quartering of horses.

Much closer to Laindon High Road then these three farms was Blue House Farm, which managed to survive and preserve some of its integrity as a farm right to the end of the Plotlands period, some of its fields subsequently forming part of the Markhams Chase recreation grounds. In part, this survival was owed to the fact that so much advertising of the potential for development was directed at the London boroughs of Stepney, Hackney, Poplar, Bromley-by-Bow, Stratford, East Ham, West Ham. Walthamstow, Leytonstone and Barking because, at East Ham, William Thomas Warrilow who traded at 15, East Ham High Street North as a Pork Butcher was a man of particular ambitions to own a sizeable number of properties. To this end, following the end of WW1, already in possession of a number of residential properties around and about East Ham and its neighbouring districts, Warrilow decided to interest himself in the fate of Blue House Farm at Laindon.

When this particular property, ostensibly situated in Laindon, was being offered up for sale in 1875, the schedule prepared for potential purchases shows the farm to have extensive holdings well into the neighbouring parishes of Lee Chapel and Langdon Hills. However its fate after that date was linked with that of Little Gubbins farm of which ancient manor Blue house had once been a tenancy. The fields of Little Gubbins, having been greatly affected by the construction of the railway through from Dunton  to Basildon and on to the new Pitsea Junction, had presented the opportunity to the land agencies involved to hive off the more peripheral holdings of Blue House like “The Plantation” (previously known as either “Hosiers”  or “Hoppet Wood”) and Marks Hill to other speculators, In consequence of this, the Blue House Farm that Warrilow  purchased at the close of WW1 was a shadow of its former self, although still viable as an agricultural unit; its retention as a pastoral rather than an arable entity being somewhat enhanced by the fact that the new station, a mere quarter mile distant, made transportation of the products from its dairy herd to “the big smoke” easier. No evidence has been found that the East Ham butchery business was in any way enhanced by Warrilow’s indulgence. Later consequences of Warrilow’s ownership will be explained in part 6.