Does the this name mean anything to you 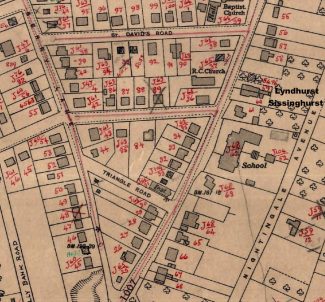 Do you remember a house named “Sissinghurst”.

Back in May 2012 we received the following request from a René Hill.

Hello, we are trying to find for a friend, the location of a house in Langdon Hills called Sissinghurst where she was born and was fostered at nine months. She is 82 years old and thinks the house was for unmarried mothers. It was on the corner of a road/street and run by two ladies.

We visited on April 3rd but, were so disappointed after asking a police lady and a taxi driver. Knocking on doors and asking quite a few passers-by. We would so like to help our friend. She had a stroke last year and has lots of time to dwell on her past. Are you able to help us in our search?

This triggered the following replies:

The first from Ellen English née Burr. The name rang a bell and Ellen confirmed from “Basildon History on Line” that it was a semi-detached house, used as a nursing home, just a couple of doors  away from Langdon Hills Primary School. It was demolished to make way for Basildon’s housing in the 1960s. Ellen offered to show them where it was located.

Then Shakun Banfield née Chowdhary confirmed that it was a nursing home and that her late brother was born there in 1935. The home was run by a nurse Young and her father Dr Chowdhary thought a great deal of her management of the nursing home and the staff working there.

Then in an article by John Bathurst I found the following:

In passing, it should be mentioned that Laindon and Langdon Hills did have its own locality in which what I have described as “the more affluent” could be either confined or treated as an “in” patient. This was the Langdon Hills Nursing Home in High Road, Langdon Hills created out of two adjacent and attached houses (“Sisinghurst” and “Lyndhurst”) which had been made interconnecting.

This establishment was run by the Misses Young, Altogether, there were four ladies with the surname Young listed at these addresses; Ivy, Rose, Daisy and Lily, and I am, regrettably, unable to say which is which in relation to the actual running of the nursing  home itself. However, after Stan Bathurst was conscripted into the British Army in 1941, my mother Lillian Bathurst went to work in a domestic capacity for the Misses Young. One consequence of this was that we, (Lillian, David Michael and the writer), went on a long train journey from Laindon in the summer of 1942 to stay for a week’s free holiday at a farm cottage called “Leigh Down “ near Skilgate in West Somerset that was the Young family’s own holiday retreat! This was a welcome break from the repeated tensions of living so close to the Thames Estuary during the Blitz.

Ellen English née Burr, met René and her friend Julia and indicated to them where Sissinghurst was located.