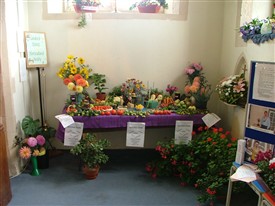 The exact date of the formation of the Society is unknown but there is no doubt that it was in existance before the Second World War. There is evidence that a Laindon Society was formed with Mr Pettingrew as chairman in 1939, his grandson was involved with the present group, up to 2009, when he died. In the early days it had links with the Dunton Fur and Feather Horticultural Society which had been created more as a dig for Victory Organisation in the Second World War.

The Society meet once a month and hold two shows a year, its current membership is around 50/60 but back in the 1970’s had reached the staggering figure of 500. The Society currently meet at the Laindon Community Centre but over the years had used the Old Community Centre at the bottom of Aston Rd., the Memorial Hall (High Rd.), St Peters Hall (Hiawatha), and Laindon Secondary School. None of these latter venues exist today.

As a Society there are close links with many other horticultural societies, such as:-  Wickford, Ramsden, Stock, Billericay etc., attending each others trips / functions and in many other ways.