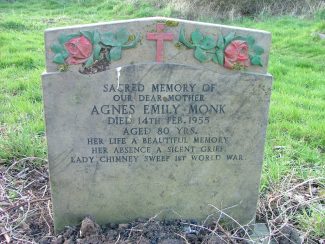 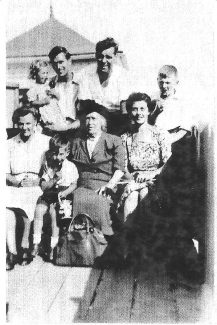 St Nicholas Church graveyard about three years ago was completely overgrown – there were brambles every where. There was one particular spot near the western boundary that was so dense that the church wardens set fire to it and as one would expect we came across a number of graves that had not seen the light of day for many years. One headstone was laying face down in the ground. The church wardens stood it up, cleaned it and reset it in the ground.

Her life a beautiful memory

Her absence a silent grief.

In July 2010, Harry Rossiter from Exeter, with his family visited St Nicholas. He was looking for his grandmother’s grave. He had visited four years earlier but could find no trace of it. The grave he was looking for was that of Agnes, so you can imagine how he felt when he was shown it.

Following his return to Exeter he sent photographs of Agnes and told us a little more about her:

Agnes Emily Monk (nee Clulow) was born in Bethnal Green on the 22nd December 1871. Her mother Sarah died when Agnes was ‘very young’ and she immediately went into service – that is, she was a ‘live in’ housemaid to a wealthy Orthodox Jewish family, who by all accounts treated her as almost one of their own.

Agnes married a second time to John Thomas Monk on the 28th July 1904; they did not have any children of their own but adopted two, Agnes Minnie born 9th July 1907 and Edward John born 4th July 1920.

John Thomas was a chimney sweep by trade and seemingly earned a good living. In 1915, he was conscripted for army service despite being blind in one eye. Anxious not to lose their clientèle Agnes decided to take over the business while John was away.

John fortunately returned from the war but one chilly November evening in 1921 while attending a band rehearsal in the Salvation Army hall in Angel Lane, Stratford he just dropped dead, seemingly from acute pneumonia. It does not appear that Agnes took over the business again.

However to help the rest of the family out, Agnes turned the downstairs front room into a general shop where anything from a few pounds worth of coal, to a fresh loaf of bread was sold. She also provided a real service selling much of her stock ‘on tick’ to help out the really needy in the road. Seemingly they always paid up; otherwise she would have had to close the shop down. Although Agnes tried to keep things as clean as possible, Harry does not feel that the business would have lasted a second in today’s hygienic climate.

Then on Wednesday the 28th September 1932 the whole family packed up their belongs including chickens and a cat and moved to a brick built bungalow, ‘Claymore’ in Woodlands Road, an unmade track off Railway Approach, Laindon.

The services were poor, gas, oil lamps, well water and bucket and chuck it toilet. Despite lacking facilities it was nothing short of paradise for the family after their rat and bug-ridden Stratford abode, 19 Gt. Eastern Road . They paid 14 shillings a week rent and groceries and milk were delivered daily. The children were enrolled into Laindon High Road School which was a mile and a quarter walk away.

In April the following year the family moved to another four bedroom bungalow named ‘Redruff’ in New Century Road. Services were slightly better as at least they had mains water. The road however was still unmade but it did have a footpath running along one side made up of a series of concrete slabs.

On the 15th November 1940 at approximately 1.30pm, a Messerschmitt on a bombing raid was shot down after combat with a Hurricane of the 605 Squadron. The aircraft crashed 300 yards west of Black Bush corner, Horndon on the Hill. The pilot Otto Jaros baled out landing on a shed in the back garden of a house called ‘San Joy’ in Worthing Road, one street away from New Century Road. Harry tells us that one irate ex east Londoner was “goin’ to carve his bleedin’ guts out”  but Agnes stepped in pushing the woman away, until the police arrived, saying he was only doing his job and he had a Mum worrying about him. She always believed in fair play.