You are here: HomenextPeoplenextNoteworthy PeoplenextGeorge and Maria Mihill of Dry Street 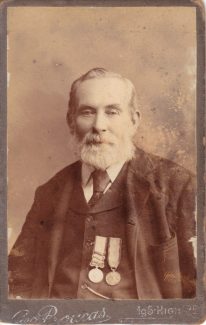 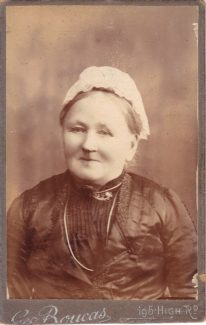 In April 1923 the funeral of George Mihill took place with full military honours at St Mary’s & All Saints (new church) Langdon Hills.  He was afterwards buried in the same plot as his wife Maria at the old St Mary’s & All Saints Church, in Old Church Avenue, Langdon Hills.  Maria had died in October 1922.  Their home address had been ‘Clapgate Cottage’.  Dry Street.  This couple’s story is quite remarkable.

George Mihill was born 1838 in Purleigh, Essex and served in the 19th Regiment (1st North Yorkshire) The Green Howards (Regimental No. 332) in the Crimea War 1854-1855.  He was wounded in the final battle for the Redan on 8th September 1855.  One of his nurses was Maria Hayden from Australia who went to the Crimea as a nurse with Lady Blackmore and assisted Miss Florence Nightingale in nursing the wounded amongst whom was Corporal G. Mihill.  Maria afterwards proceeded to India as Matron in Charge of women and children.

George travelled to India where he fought through the greater part of the Indian Mutiny.  He had many clasps and medals.  Three years after their first meeting, George and Maria renewed their acquaintance while in India.  George was invalided home and he and Maria returned to England together.  They were married at St. Leonards, Shoreditch on 6th February 1861 and went on to have eleven children.

By 1911 George and Maria were living at Clapgate Cottage, Dry Street.  Shortly after celebrating their Golden Wedding Anniversary, the couple were interviewed for a newspaper article.  Mrs Mihill was able to relate many stories about Florence Nightingale and her many acts of kindness.

In 1921 Queen Alexandra was made aware of the old veteran couple and showed a kindly interest.

Upon the death of George Mihill, William Skinner, the Chairman of the Parish Council, via a series of contacts, arranged for a Military Funeral to take place.  The Essex Depot (Army) very kindly sent a funeral party from Brentwood consisting of a firing party, buglers and bearers by motor and a very impressive service was conducted by the Rector, the Rev F Clayton after which the coffin was carried by six bearers to the Graveyard of the Old Church some quarter of a mile distant and interred in the same grave that contained the remains of George’s wife Maria.  At least 100 Parishioners were present at the graveside, being most solemn and touching.

The grave was said to be in a very prominent position but as to date it has not been located.

Note:  A little about the photographer.