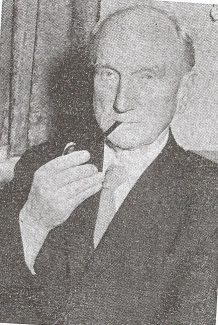 ‘The man who was Laindon’ this was the headlines in the local paper in October 1963 following the death of Frederick Charles Jobson. A little bit of a misnomer as he lived in Langdon Hills and had done so since he moved to the area in 1906 but of course we have to remember that Laindon was really the dominant parish at the time. Its dominance only started to diminish when the Basildon Corporation got its claws in to developing the area in the late 1960s.

Just a short time before his death he gave an interview to the local paper on his view of the area:

‘Author Mr Jobson has lived in the area for 56 years almost long enough for him to know Langdon Hills as well as it knows him.’

‘There is a play called “Look Back in Anger” but after 56 years resident in Langdon Hills I can only look back with pleasure.

I was much younger 56 years ago and we young people did not wait to be told by the ‘Old ‘uns’ what we should do.

The reason we found ourselves in this delightful spot was the land was very cheap; it was and still is, a beautiful place to live in. The activities centred around the church and when the church hall was built, all kinds of activities took place; plays, dances, concert parties, musical evenings, Shakespearian evenings, debating society, etc.

With regard to sport we had a tennis club with two courts and for a while a nine hole golf course, the first tee being just above the Winston Club going down to the Water Tower and around. There was not much fairway and plenty of hazards but it was jolly fun.

The result of all these activities was that natural talent was discovered and we were fortunate in having gifted musicians and singers and a concert party which, giving good music interspersed with funny items, was a great attraction. When the First World War commenced in 1914, we carried on these events in aid of the Red Cross.

The event preceding the declaration of war was my wedding day. Cars were non-existent in Laindon and two were hired from Billericay.

One called for me to take me up the Church and at the bottom of the Crown Hill he turned the car round and went up backwards. I of course, asked what the big idea was.

He said “I always go up steep hills backwards. This car will do anything in reverse. You can climb a tree in it.” I told him I had no wish to climb a tree but that I wanted to get to the church.

The war being over and the young chaps coming back home we bought a hut from Corrytown for £100. Volunteer labour re-erected it on its present site, when it was called The Hut Club. Two billiard tables, a table tennis table and a stage were provided so there was another centre for music and drama and general entertainment. A flower show was staged many times.

Without the various church halls us young people 56 years ago would have been “sunk”. They enabled us to develop our natural gifts.

I look back with pleasure to the opportunities given to the young people. The Editor had invited me to write this article and I hope it will be of interest to the readers and prove that with the right spirit in a community the right things can be accomplished.’

Frederick was a major influence in the area for several decades. He was born in West Ham and after going to a local school went to a technical college and during the First World War he worked as a draftsman, designing aeroplanes. After the war he went into partnership in the firm Jobson and Beckworth Ltd. His firm made pumps, including those for an engineering project in Llandarcy. Wales, which at the time were the biggest in the country. At the other end of the scale they made the pumps that powered the fountain in the garden of remembrance at St Paul’s Cathedral. During the Second World War the firm was involved in the manufacture of submarines.

Also during the Second World War he managed to find time to join the Auxiliary Fire Service, first as a fireman then later accepting a commission.

For a time he was also chairman of the local Labour Party, associated with the Basildon Rugby Club, the Civic Arts Society, Laindon old people’s welfare committee, Boy Scouts associations as far out as Billericay and sat on a number of school managements.

If this was not enough in 1932 he became a J.P. and ten years later became chairman of the bench, a position he held until he retired in 1962.

When he retired it was said of him that he had that essential quality of patience and the ability to listen to any argument, however forlorn it may have been. He always made sure that the defendant had a fair trial.

When the Basildon Corporation came into being in 1949 it was natural that he was given a seat on its management board. In later years he became very concerned about the development of Basildon, especially at Langdon Hills and was known to be very worried about the compulsory purchase powers of the corporation.

Frederick was a member of the St Mary’s Church, Langdon Hills, a lay preacher for the local diocese and would often use the pulpit of St Mary’s Church to make a point in particular to violence or repression. He was ever ready to attack those seeking to gag the press or free speech.

He died at the age of 76 in late 1963 just four months after the death of his wife Christina. He left behind a daughter Ivy, who remembered him as a man who could ‘walk with kings but did not lose the common touch’ and a great man for telling stories. He also left behind, son Victor whose stage name was Vivian Milroy who was at the time involved with the new television drama ‘Coronation Street’.

The Rector of Langdon Hills the Rev. E. C. Telford commented following his death “Somebody told me the other day that Mr Jobson was Langdon Hills – I would go further. He was Laindon too.”