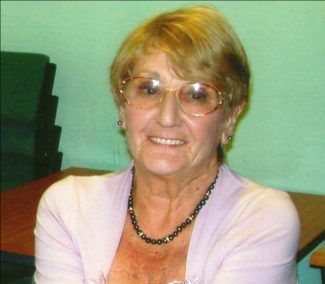 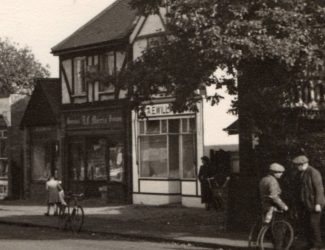 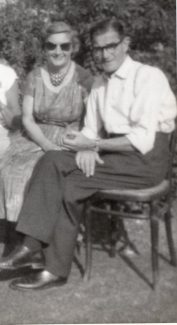 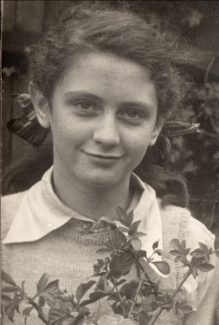 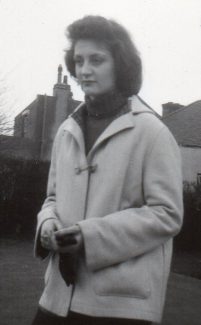 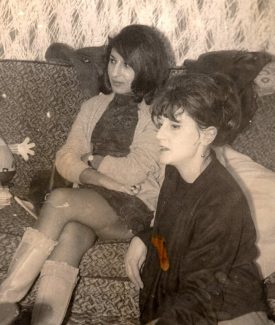 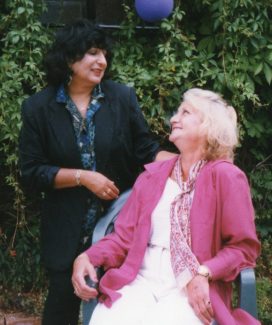 Natalie – my closest friend from childhood in Laindon died suddenly at her home in Dereham, Norfolk last November.  She was sitting in a chair dressed to go out awaiting a cab to take her to a hospital appointment when her heart failed.  I was shocked and greatly distressed to hear the news of her death as she and I had kept in contact over the years and we always felt a telepathic link existed between us which prompted us to ring each other in the event of a major crisis or just the need to speak.  Sadly this time, there was no warning phone call.

Like so many contemporaries of mine in Laindon, Natalie was brought into this world on 30th November 1938 by my father Dr Chowdhary.  Her family home was at Retlaw, High Road, Langdon Hills. Her parents were Ivy and Albert Williams. Ivy’s mother known to me as Grandma Harvey, whose husband had been the Station Master at Laindon Station before his death, lived with them.   The entrance to the house was at the side as the front was for some years a fish shop owned and run by Albert Williams.  This was situated at the end of a parade of shops opposite where Vowler Road meets the High Road.  Ivy Williams had been a member of the Langdon Hills Operatic Society for some years and when I knew her gave piano lessons at her home to youngsters.

Natalie and I were both naturally musical and were taught piano from a very young age by Miss Winifred Cornell who lived with her elderly mother in a large house on the first hill.  I cannot recall how old I was when Miss Cornell entered Natalie and I in a music festival with plans for us to play a duet together.  It was therefore our piano teacher who brought us together.  As Natalie said in a short piece she wrote “If it had not been for Winifred Annie it is doubtful that we would have become friends.  Although our fathers were friendly, Shakun was away at boarding school and I was kept busy by social events at our Methodist Church so our paths did not cross.  I went to see Shakun at Daisybank with the music and before ten minutes had elapsed we were firm friends.  For the first time in my life I had someone that I felt understood how I felt, who thought the same way as I did.

My family was very strait laced and I was a rebel..so was Shakun! My parents were delighted that I had made such a suitable friend (who could be more suitable than our dear doctor’s daughter – especially as she played the piano!)”

Our subsequent many visits to each other’s homes involved lots of giggling, singing, piano playing as well as eating delicious food together.  To quote Natalie again “One of my fondest memories is of Gandma Harvey frying sprats whilst Shakun and I devoured great mounds of them with them with new bread from Cottis’s bakery a few doors along.”  Of eating at Daisybank she wrote “I had my introduction to Indian food at Shakun’s.  Her mother used to cook the most delicious curries which she served with chapattis”.  In fact, both of us were able to taste foods we would never have eaten in our own homes.

Natalie went to Langdon Hills Primary school and then on to Brentwood High.  She later started training to be a teacher at college in Bristol but after a while decided this was not for her and left.  She kept in touch with me by letter when I was at boarding school.  These letters were full of local events and the many friends she had made and I felt quite envious of her lifestyle.  During the holidays we invariably got together for piano playing sessions and outings and our friendship deepened as the years went by.

We had much in common not only as musicians and lovers of jewellery but as actors – Natalie being a member of the Langdon Players and me taking major roles in school plays. Aged about seventeen, we joined forces and called ourselves The Ravens (both having black hair) putting together a programme of songs and solo piano numbers we thought might be suitable to perform in West End night clubs.  Although this plan did not come to much the aspirations and dress rehearsals were such fun!

As teenagers in the fifties, we were both lavishly made up and dressed fashionably in our colourful felt circular skirts and lightweight summer ones with many stiff petticoats underneath.  My parents never worried about me when I was out with Natalie, they were both very fond of her and felt a certain confidence about what they considered to be a sensible positive influence on me.  In fact, her parents seemed to have an identical opinion about my influence on Natalie!  Natalie’s lifestyle included boyfriends and I became quite envious of this given that there were less opportunities for me to follow suit being a boarder at a Convent school and the fact that my parents did not encourage this.  So many of my outings with boys were clandestine with Natalie providing an alibi.  She was often able to arrange a foursome, which invariably involved blind dates for me (not always successful) and I also muscled in on parties in Laindon with her.   She was an enthusiastic member of the Langdon Players, I recall hanging around with Natalie and Cliff Scudder, a fellow enthusiast and going to the productions when I was home for the holidays.  I believe she had been a member of the Laindon Operatic Society and have a dim recollection of seeing her in the chorus of the Desert Song.

Natalie was always there for me in times of trouble and I knew I could rely on her.  I like to think she felt the same about me.    She was abroad when my father died in 1959 but came rushing back to be with me when she heard the sad news.  Whilst her sympathy abounded and she was shocked and distressed herself, her nature was to restrain from showing too much emotion and this control provided a rock like support for me during this terrible time.

Over the subsequent years we kept in close contact.  We continued to meet regularly, usually for dinner at one of our homes.  Our nightclub repertoire had by then evolved into a musical comedy act with songs being sung slightly off key and piano notes out of order performed only in front of family and friends.   During this period Natalie was living in the East End.  Following her divorce, she decided to move to Norfolk where her much loved Aunt Elsie and Cousin Rod were living.  After this move, we made a point of speaking on the telephone at least once a week and staying occasional weekends at each other’s homes.

At New Buckenham, she joined the local amateur dramatic society and took leading roles in several of their productions which I managed to see.  I must say I was very proud of her considerable acting skills.    The friendly community there was akin in many ways to Laindon and she felt very much at home quickly establishing herself and making friends.

Unfortunately her landlord needed her accommodation for his ailing mother and so Natalie moved to a bungalow in Dereham where she remained until her death last year.  Visits to her included concerts at the Kings Lynn music festival and trips to Wells next the Sea which was one of her favourite seaside places.   As well as enjoying seafood, Natalie felt a great affinity for the sea as Grandma Harvey came from one of the six Leigh on Sea cockle families.   No wonder Leigh on Sea was which was another of her favourite places.   When she stayed with me we enjoyed visits together to plays and musicals in London as well as trips to the much changed Laindon, usually lunching at the Crown and then on to the cemetery at the Old Church, Langdon Hills where many Laindon folk known to us are buried as well as Natalie’s grandmother and parents.

In later years she suffered badly from arthritis and eventually had to give up piano playing altogether.  Her ability to walk was also severely affected and so she became more housebound then she would have wished.  Her two cats provided a welcome focus and her weekly scrabble sessions with neighbour Kath and link with Kath and Tony next door were a lifeline.    She told me she very much valued the support given by Vanessa who started off as her home help, soon becoming a lifelong friend. Rod her cousin who had often visited her and her parents at Retlaw as a child always kept in touch with her. Although she did not use a computer, I kept her in touch with the Laindon website by sending her copies of various photos and articles which she valued.    Natalie never lost her special sense of humour nor her realistic down-to-earth outlook on life.   She was always totally tuned in and supportive to whatever was going on for me whenever we spoke on the phone, in spite of being in a lot of pain herself.     So that telepathic link continued until the day before she died when I spoke to her for the last time.

Natalie Williams a friend indeed you are so greatly missed.