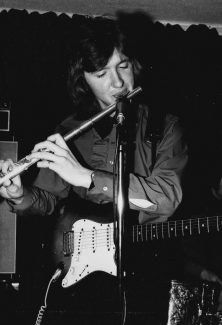 I wonder how many of you remember the top 10 recording group The Pinkees.  They had a record which reached number 8 in the U.K. singles charts and appeared on BBC’s Top of the Pops among other programmes in 1982/3.  The Group’s lead singer was a Laindon lad called Paul Egholm.  He went on to front other bands and more recently had a workshop at Barleylands, where he handmade guitars and lutes for many musicians.  Sadly Paul passed away on the 28th April, he was 68.   Paul never lost his love of music and was in his element when playing and singing to an audience. Paul attended all three of the Laindon School Reunions for his year group of the 60s and entertained his peers with a medley of 60s hits in September 2016.  He will be sadly missed by his family and many friends. He leaves a daughter Sarah and 2 sisters, Sharon and Diana.  His funeral will take place at Herongate Wood burial ground, Brentwood
on Thursday 25 May at 11am, a music man to the end.