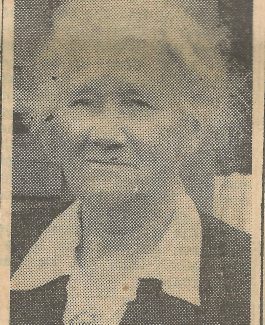 What’s my name? This headline appeared on the front page of Southend District Times, Basildon & Laindon Recorder 13 June 1956. Is there anybody about who remembers her?

‘This grand old lady might be closely connected with your life, for quite possibly it was she who saw you safely into this world.

When she retired from midwifery 10 years ago she had delivered nearly 2,000 babies safely into being. Now at the age of 75 she is one of the fittest old age pensioners in the district.

Born at Lancaster in August 1880 she attended the Lancaster Girls National School. At school she was outstanding at gymnastics and won a large cup four years in succession competing against other girls in the gymnasium. It now stands in a prominent position at her home.

At the age of 15 she left school and began teaching gymnastics and swimming professionally. Until the age of 35, she was successful in her profession.

Then she decided that she would go in for midwifery and went to the Queen Charlotte Hospital in London where she took a six months training course.

She was back in Lancaster soon after when she took up private nursing. In 1917 she was appointed district midwife for Farnborough. She held the appointment for two years.

From then until 1926 she was district nurse and midwife for Sheffield. She came to live in the district for a year. For a time she worked privately, until she was appointed in 1937, County Midwife for the Laindon district. She retired in 1945 age of 65.

During her years work as a midwife, she claims she has always kept up a certain amount of exercise and thinks that is the reason for her fitness. Now she is a keen gardener and spends much of her time digging and keeping the weeds down in her sizeable garden. When our reporter called she had just completed a couple of hours’ weeding. While she had been on holiday at Dawlish, Devon, during the last two weeks the weeds had grown prolifically.

Seven years ago she went to Canada for five months and stayed with her brother whom she had not seen for 40 years.

She is a member of the Laindon Darby and Joan Club and also of the Langdon Hills Old Age Pensioners. She is a regular attender of the parish Church.

Her tonic for keeping fit at old age is: “Keep moving, work hard, don’t worry”. Well you might say this is not easy but she has always abided by this and is now one of the fittest 75-year-olds you will find in the country.

She accounts for her fitness by her sporting activities in her earlier life. She was the only girl out of nine children and claims with pride that she played cricket, football, “everything”.’

I know it’s a long time back does anybody remember her. In the paper you would have had to turn to page five but I will keep you out of your misery: Her name: Miss Mary Ellen Price.