You are here: HomenextPeoplenextRecreation and EntertainmentnextAcross the Footlights (3) - Fred Pitts

Across the Footlights (3) - Fred Pitts 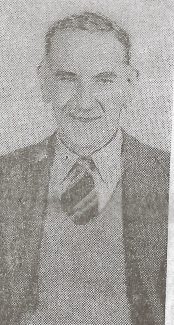 Fred Pitts is the third in the series of those members of the Laindon and District Operatic Society (now BasOp) who entertained people of the district in the years before and after the Second World War.

BasOp is the only district entertainment group that has survived and still going strong from those halcyon days.

Fred was a World War One Veteran who was injured at the Battle of Flers-Courcelette part of the Somme offensive on the 15th September 1916 the day that the British used tanks for the first time.

Fred brought his family from Greenwich to Laindon in 1928 moving into a bungalow in Pound Lane. St Nicholas Church could be clearly seen from his back garden. They knew the area well as his wife Beattie had relatives who had been living in the area since 1883. It was her grandfather Nathan Beardwell who had moved to the Basildon area with the Rev. Beaumaurice-Stacey Clarke from Boxted, near Colchester as his groom and gardener. Rev. Clarke became the Rector of Laindon-cum-Basildon.

Fred joined the society in 1934/5 and though he actually appeared in many chorus line ups, his main responsibility was for the scenery for which the society’s shows were noted for.

To make the scenery he used sack cloths covered with newspaper and after he had painted them, they compared favourably with any of the most expensive sets that could be hired. They were often hung in the old barns of Langdon Hall to dry out.

He was also called upon to make a variety of props. His handicraft included secret panels, gondolas, trees and for one particular performance of ‘Rebel Maid’ he made an old fashioned knife-grinding machine.

During the Society’s time at Laindon High Road School, Beattie provided the cakes and teas; Madeline cakes being her speciality. Two of his daughters Gladys (Pope) and Margaret were also members and later niece’s Janet and Ann (Pope) joined the society.

In the Second World War Fred enlisted with 5th Battalion Essex (Brentwood) Home Guard on 27 March 1942 and was discharged on 31 December 1944 when the Home Guard was stood down. He failed to get a defence medal by sixty nine days non service. For the Great War he received all three medals, the 1914-1915 Star, The British War Medal 1914-1918 and the Victory Medal.

Fred past away in 1956 age only 61 and is buried at St Nicholas. Oh! By the way Fred and Beattie are my grandparents.