Across the footlights (2) - Ivy Wheeler 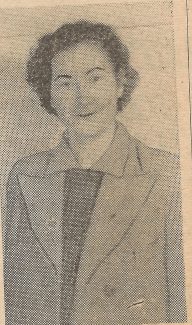 This is the second in the series of those members of the Laindon and District Operatic Society (now BasOp) who entertained the people of Laindon and surrounding district in the years before and after Second World War. The following article is from the Southend and District Times and Laindon Recorder – Wednesday 14th March 1951.

‘A hush fell on the audience as a small schoolgirl with a crystal clear voice sang the words of the ballad “Where ever you walk,” during a music festival at Chelmsford. When she finished, the applause was deafening.

That was a number of years ago and today, Mrs Ivy Wheeler continues her singing with the Laindon Operatic Society.

As an amateur singer, Ivy has always stood out above most of the others ever since when as a child, she sang in the Langdon Hills school choir.

Later on she won a singing scholarship and studied under McDame Paying, of the Royal Albert Hall. But Ivy did not choose a singing career and rather take the risks of the professional stage, she sought the security of marriage and family life.

Ambition: Grand Opera – Ivy joined the society for “H.M.S. Pinafore” while she was still at school and her long list of successes include leading parts in the “The Gondoliers”, “The Mikado”, “H.M.S.Pinafore”, “The Rebel Maid” and many others.

Her husband, Fred is a member of the Langdon Players and also belonged to the Laindon Operatic until a few years ago. His last part was the title role in “The Mikado”.

Now they have a young daughter, Vivien.

Ivy has only one hobby – singing! And her ambition is to sing in Grand Opera.’

I wonder if she ever did, does anybody know?