A New Butterfly on Langdon Hills!

A new Butterfly on Langdon Hills!

The Langdon ridge has long been remarkable for its rich butterfly population, in terms of both the number of species appearing there in recent decades (30) and the numbers in which most of these species occur. That figure of thirty includes the highly elusive white admiral: it would be nice if we could be satisfied that it is once again breeding in our midst, as it once did up until the 1960s. Singletons encountered since then have served to keep up our hopes.

It also includes two species – marbled white and green hairstreak – which have arrived within the last two decades. (Against that must be set a thirty-first species, the dingy skipper, which was quite common up until the 1970s, but which has since become extinct throughout Essex).

Now we can draw your attention to a thirty-second species, which appeared this year. On 6th August Nick Stanley (Senior Ranger at Langdon Hills Country Park) had the pleasure of encountering a silver-washed fritillary in his garden at One Tree Hill, nectaring on one of his buddleia bushes. Moreover, he managed to get a couple of photographs of the creature, enabling us to appreciate that this was a somewhat battered male insect, which perhaps had come far from where it had grown up. 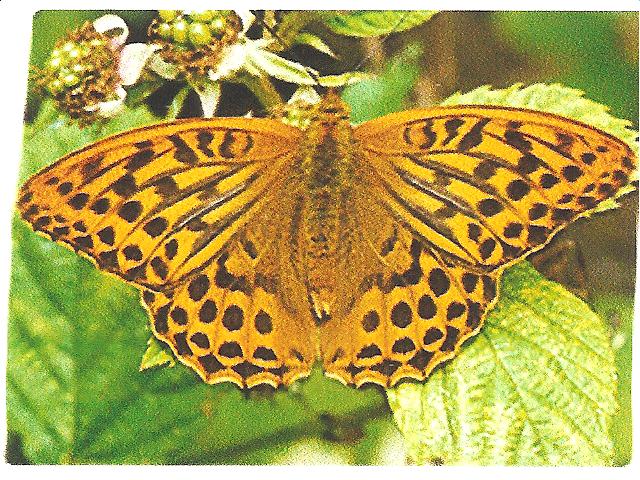 Now one battered individual does not make a summer, or however it is that the saying about swallows goes. Nevertheless, put into context, this makes an exciting discovery. This butterfly used to occur in various wooded parts of Essex in the past, but by the 1960s it had died out, in keeping with some of the other woodland species of fritillary. The cessation of coppice management probably had a lot to do with it, back in the days of cheap and easy alternative fuels.

The appearance of individual silver-washed fritillaries at various places in the country over the past few years has thus been very encouraging, suggesting that this butterfly is managing to stage something of a modest recovery in parts of England where it had been known to occur in the past. In particular, there have been several sightings in Hatfield Forest and Ongar Park Woods, notably in 2006, as well as near Harlow and closer to the Hertfordshire border, beyond which the butterfly has managed to hold on in various localities. The encouraging trend continued, culminating in this year’s pleasing records.

Several were seen in July this year at Belhus Park, implicitly close to Langdon, while singletons were spotted at Bedfords Park (3rd August), Great Warley (2nd July) and at Benfleet Downs (7th August). The One Tree Hill butterfly has to be seen in this context. There were other sightings further north in Essex, as well in Suffolk and Norfolk (where, again, the butterfly had died out a few decades ago).

Inevitably, we now wait the next summer (2011) with considerable interest. Thanks to some of the management practices in some local woods in recent years we now have the kinds of coppice clearings where a breeding population might yet establish itself. What is needed is a considerable growth of dog violet, in appropriate conditions of dappled shade, with adjacent tree boles upon which the females can lay their eggs. What is also needed, of course, is the relevant rotations of woodland management, providing new spots for colonisation as earlier coppicing for a year or two and then ceasing.

Fortunately, coppicing is so beneficial for a wide range of wildlife that whatever the prospects for the silver-washed fritillaries, there are plenty of other organisms which are benefiting from this form of management. Moreover, the resulting cordwood has its value for those who burn logs in winter. Marks Hill Wood and Northlands Wood now boast some fine sections of recently-coppiced woodland along with various spots around Willow Park .