Stretching from Basildon Golf Course to the Dunton Road, Langdon Hills is a very good stronghold for one of Britain's favourite mammals, the badger.

Stretching from Basildon Golf Course to the Dunton Road, Langdon Hills is a very good stronghold for one of Britain’s favourite mammals, the badger. The soil of Langdon Hills is mainly bagshot sands and claygate beds, both are good for tunnelling into, without collapsing and also have good drainage. The hills are woodland, meadows and some arable and this all makes good habitat for the badger to live. Some of these setts are quite close together, which could be due to the soil type in that part of the hills. Their homes which are known as setts, consists of a number of tunnels and chambers, these can be built on one or more levels. They are designed not to flood or be draughty, but allow a flow of air to go through, keeping the chambers smelling fresh. The badger is a clean animal taking bedding down into the chambers for sleeping on and fetching it out onto the spoil heap out the front of the sett entrance to air. They will move from one chamber to another after a few days, this helps to keep the chambers clean and stops the badger becoming over infected with fleas. Badgers are territorial animals, this is more evident in the early part of the year when the boar will scent mark the boundaries. Individual badgers will move into another family’s territory, to find a partner and breed with – this stops interbreeding.

Badgers are persistent diggers, that is why they have a broad muscular chest, powerful front legs with long claws. 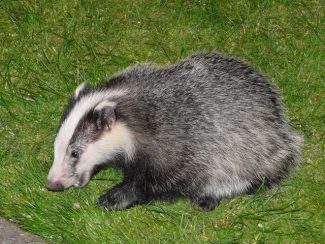 The normal colouring of badgers are, black and white striped face, black legs and underparts and a silver coloured body (melanistic). The guard hairs on the body are three colours, which gives the silver effect, however we do have an albino (white) badger living in one sett that I know of. 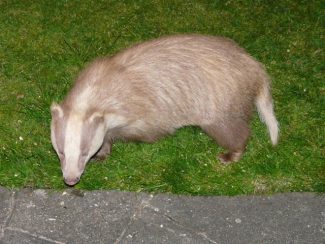 There are also erythristic (brown and white) badgers in quite a few of the setts on Langdon Hills, one sett has three generations of erythristic badger living there, the eldest one being the dominant boar in the sett.