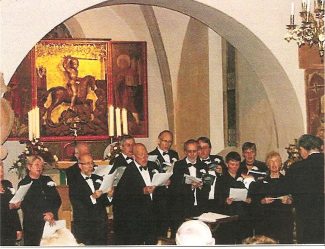 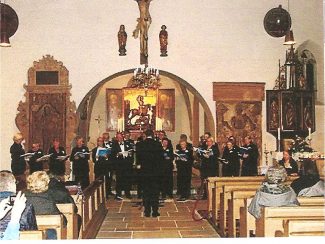 zoom
In concert at Kraftshof

Although the Basildon Choral Society is truly part of the Basildon scene its origins are firmly from the area of Laindon and Langdon Hills.

The vision came from Margaret Roper, a local violinist who lived in Langdon Hills. She held an informal meeting in her home and they decided to form a choral group. They held their first official meeting on the 24th November 1958 in St Mary’s Church, Langdon Hills. Mr Cross was elected Chairman, John Simpson Musical Director and the accompanist Charles Clark, who had been the organist at the Laindon Methodist Church, Langdon Hills for many years.

They initially hired a classroom at Langdon Hills Primary School for rehearsal and their first concert, Haydn’s “The Creation” was performed on the Saturday 31st October 1959 in the Laindon Methodist Church.

Over the next couple of years various concerts were held. In November 1961 Mr Cross stepped down as Chairman and Fred Clark was appointed and with this they decided to spread their wings and start recruiting membership from the New Town of Basildon. They affiliated to the Basildon Civic Arts Society, a newly set-up body dedicated to developing and supporting the Arts in the new town.

Concerts continued in the Methodist Church and other venues around Basildon but by 1963 there was a further need to increase membership so they decided to have their rehearsals in the New Town. In addition to the Methodist Church, concerts were now being held in St Martin’s Church in the Town centre.

In June of 1969 they held a summer concert in St Nicholas Church as part of the Church Festival and they performed again in 1989 for St Nicholas Church at the Laindon Community Centre to raise funds for the Church Restoration Fund. In 1977 they took part in the St Mary’s Church, Langdon Hills Centenary Celebration. They were occasionally accompanied by Basildon Symphony Orchestra, Thurrock Choral Society, Basildon Concert Band, St Mary’s Chamber Orchestra, and Sweyne Choral Society and many school choirs.

Their 25th Anniversary concert was held at the Towngate Theatre on the 13th July 1985 accompanied by the Kibworth Band with Peter Skellern as guest. Their 40th Anniversary season started with a dinner in St John’s Church, Langdon Hills. Their 50th Anniversary was in 2008.

Basildon Choral Society is an amateur choir with a repertoire that ranges widely from motets, masses and challenging modern choral works to spirituals, jazz numbers and arrangements of songs from favourite musicals. They normally perform four concerts a season and also give a variety of additional performances throughout the year at the requests of churches, charities etc. The director is Stephen Hope and Geoff Williams has been chairman since 1993.

The choir has become well known outside the borders of Basildon Borough and has established itself as one of the leading choirs in Essex . It meets for rehearsals every Wednesday at St Gabriel’s Church, Pitsea, 7.45pm to 9.45pm . New members are always very welcome. Check out the website: basildonchoral.org for lots more information.