You are here: HomenextPeoplenextSports and sports peoplenextCricket Teams in LaindonnextThe Early Days of Cricket in our Community

The Early Days of Cricket in our Community

There appears to be very little prewar history 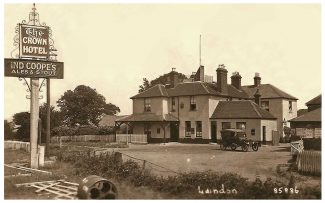 Langdon Hills CC certainly existed prewar and must have been formed very early, as the photograph of the Crown Hotel shows a car cark with only one vehicle which I believe to be a model T Ford, yet in the foreground there is a roller on the hotel meadow which suggests cricket was being played and there is no history of Langdon Hills. CC in the archive even though it would appear to be our oldest club.

Prewar there was also a wooden cricket pavilion halfway up the Langdon Hills Rec. and a primitive strip, but I cannot remember any club there.

I did play cricket prewar with some of my friends from Laindon but this was for Dunton Colony.