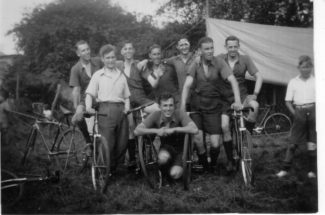 The archive requests information in respect of Laindon Bicycle Polo Club. I was a member, although not in the photograph, but macular degeneration prevents me from identifying those who were. The club was formed circa 1935 by Sid Hayden, the manager of the AMA Building Supplies. As it was over 75 years ago I can only remember some of the names of players. Chris Collings (Capt), Joe Oliver (England Goalkeeper), George Wellington, Reg & Ray Ferrer, Laurie Hatherall, Alan Mitchell, Wilf Simpson and Howard Hutchins.

Cycle Polo was a winter sport and no competitive league games were ever played in Laindon as they were all played on Sundays at the league ground at Roydon Milhouse, although highlights were sometimes shown at the Radion Cinema, by courtesy of Pathe Gazette and British Movietone News.

However in the summer we practised on the Laindon Hotel meadow and gave some light hearted exhibitions on carnival days, using ramshackle cycles to avoid damage to our match customised Claude Butler frames, supplied via Geo. Fuller Cycles of The Broadway, Laindon.

The club was very successful and in 1937 competed in the national finals at the elite Hurlingham Polo Club but were narrowly beaten by a south London club, Norwood Paragon.
The club ceased to exist with the outbreak of war. Cycle Polo was a serious game and not a carnival sideshow as some believe. I understand that it is still played but not in this part of the country.

Thanks again Evan Connon – Check out our web site https://irishbicyclepolo.wordpress.com/history/