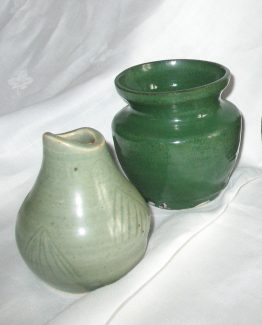 zoom
Light green pot I made in 1962 with a typical Eastern Celadon glaze that George used.
Patsy Mott (née Tyler) 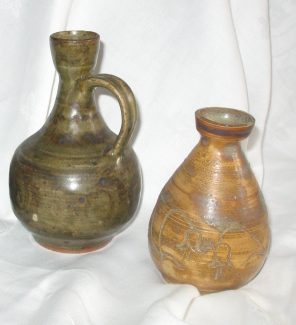 zoom
Stoneware vases I made about 1962
Patsy Mott (née Tyler) 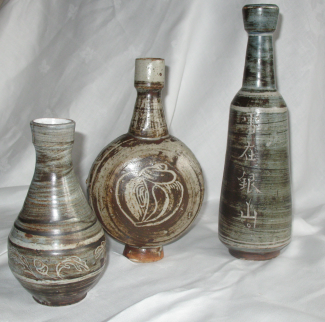 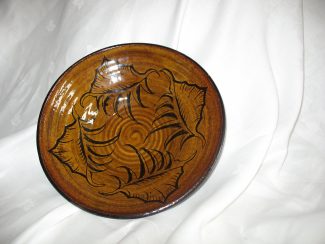 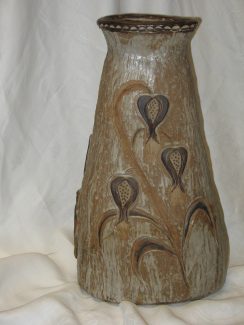 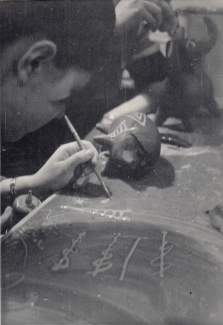 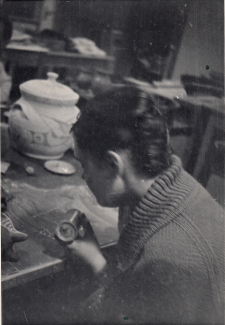 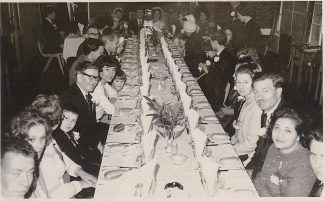 From the time I started the school in 1956 I had an affinity with Mr. Miniken. From a young age I had always been used to making anything from various materials including wood [my father was a cabinet maker] so hammering & sawing was second nature to me. I made little models from plaster of paris in small rubber moulds painting and glazing them for family presents. Anything made from fabric or wool kept me quiet for hours. Getting my hands into the clay was just sheer heaven to me, it was so tactile. I still have the very first pieces of clay work that I produced, a thumb pot and a model of a seal, they are stashed away in the loft with many other pieces that I made over a period of about 10 years. George always told us to keep our early work so we could see how we developed as we progressed over the years.

Throwing on the potters wheel was bliss to me, like magic a pot, dish or vase would appear from the inert lump of clay on the potters wheel, I was in my element. I remember George telling me about his training as a potter. His tutor was a chap called Washington who had in turn been taught by Bernard Leach who was the great and famous studio potter in the early 20th.century who had a studio in St. Ives in Cornwall. Although  Leach was British he was born in Japan. He returned to England when young but then went back to live in Japan, Korea and China for 30 years making life long friends and  being tutored by eminent and revered teachers. He bought these Eastern designs and techniques of making pottery back to Britain so his tutoring and methods lived on through his students. This direct connection with the east naturally influenced Mr. Miniken’s style and methods so they would be passed through his teaching onto his pupils.

In the early years the art room was on the front south [girls playground] side of the school with the kiln attached to the outside wall of the classroom at the end of the exposed covered walkway. One incident I remember very clearly was in that art room in my early days at the school. I was a quiet, nervous child back then and although I had special friends I was not in a gang and enjoyed being an individual and not “one of herd”. I had long hair [not fashionable then] and was bought up with classical music so when it was all “Rock & Roll & Elvis Presley” I did not fit into other students idea of being ‘normal’ or ‘with it’. One morning on entering the art room some wag thought it a good idea to write less than flattering comments on the black board about me. Mr. Miniken arrived and went loopy saying he would not tolerate bullying of any kind. He asked for the perpetrator to own up but naturally no one did. He told the class that if no one had come forward by the end of the afternoon the whole class would have detention. As no forthcoming pupil confessed he told me I could go home but kept the rest of the pupils behind. This was justice in a way but I was embarrassed and of course was not popular with the rest of the class for a while but this experience taught me a valuable lesson, to be determined to stick to my own values, ethics and ideas.

Does anybody remember Mr. Smale, he too was an art teacher at the school, he took our class in the second year?

In my third year Mr. Miniken took six of his pupils up to London for a day to The British Museum and The Victoria & Albert Museum in South Kensington to study various famous potters work, also the  china, porcelain & pottery made by British & foreign manufacturers of the world throughout the past centuries. It was my first visit to the museums and never forgot the experience.

The new art building built on the bottom of the school field was completed while I was at the school. Larger areas and facilities in the art rooms including a new kiln inside the pottery class, this made the lessons easier for all concerned. New electric potters wheels as well as the old kick wheels meant more students were able to experience throwing pots on the new equipment.

George made a large flat sculpture of a figure holding a wheat-sheaf that was mounted on the south wall of the building. When the school was being demolished Ian and I tried to get this last remaining piece of Georges art work removed and saved so it could be perhaps mounted somewhere locally as a reminder of Mr. Miniken and the old school. Needless to say the demolition company were not helpful and regrettably we were unable to save the sculpture.

Mr. Miniken did not allow students to throw clay around and I can remember on occasions when they thought “Sir” had not seen them lobbing pieces about the room, lads would unexpectedly get a cuff around their ears and protesting their innocence. At other times young lads would insist on modelling inappropriate models from the clay!!! I expect George had seen it all before but he had a great aim with a board rubber or alternately a trip to Mr. Woodward’s room sorted out their artistic ideas of what constituted art.

At the end of the summer term in 1959 there was to be ceremony with a dignitary in attendance [can’t remember who he was but his name is still indelibly imprinted on my brain]. As I had won the art prize that year Mr. Miniken asked me to present a piece of pottery that he had made especially for the occasion. I declined the offer but his encouragement gave me confidence to agree to the ‘Honour’ and insisted that I would be alright. Being given a speech to learn was a nightmare for me. I shook like a leaf on the night of this special event,then my moment came to hand over the piece of pottery. The first line of the  speech was “Mr. Horovich, I would like you to receive this piece of pottery——-“, the rest is obliterated from my memory. Still after all these years those words bring back the fear I felt in my little moment of glory.

In my last year at Laindon School Mr. Miniken come to my aid as he felt I would benefit from being able to stay on in the extended form so I could take extra Art & Needlework instead of Typing & Shorthand that was the only option offered to the female pupils at that time. He tried to get the authorities to arrange a course so I would be able to stay on that extra year so I would be able to go on to Barking Regional College at  the age of 16. I went into Mr. Gay’s class for a term but it was decided because I was the only student in that year needing the art & needlework courses it would not be possible to add these subjects to the curriculum. Mr. Miniken’s efforts came to nothing, both he and I of course were very disappointed. That first term with the other girls I attended Miss Maitland’s class for shorthand & typing etc. How I loathed those lessons, totally alien to me, so in the Spring term I was able to attend Mr. Miniken’s class to do more art instead of the office course. I left on my 15th. Birthday, Easter in 1960.

When the new Laindon Community Centre in Aston Road opened George arranged for several pupils to demonstrate pottery techniques together with other activities that were taking place to promote the new building. I remember helping to set up the equipment then spending the day throwing pots for the local dignitaries and visitors. I have never seen any pictures of this event or remember the exact date it took place. Does anybody have any information, think it must have been 1959-1960-61?

Like many other people I went on to join the Youth Club after they left school, I used to go twice a week to George’s pottery classes. This is where I learned so much from him, technique, design, glazing and my favourite, throwing on the potters wheel. I taught myself Calligraphy also Chinese Characters to use as Sgraffito decoration on my pots.

George left Laindon High Road in the early 60’s. He contacted me asking if I would like to become his technician at the Teachers Training College in Sawyers Hall Lane, Brentwood where he was the Pottery Tutor. I attended the interview and was offered the post. Unfortunately because of family circumstances I had to decline which was again a great disappointment. When Ian and I were married in 1966 George & Ann Miniken came to our wedding.

The only coloured photos we have of our Wedding Day George took for us, back then black & white pictures were the norm.

In the early days George & Ann Miniken lived in a flat in Briar Mead opposite where we lived in Powell Road on the King Edward Estate then they had their new house ‘Gerenzago’ built on the east side of the High Road nearly opposite the junction of Roberts Road. I visited the house several times, he showed me where he had built his own kiln and  dug clay from the garden to make his pots.

George was an inspirational teacher with imagination and enthusiasm that he passed onto his many students. I for one feel privileged to have known him and will for ever be grateful to have had him as a teacher and mentor throughout my early years.