You are here: HomenextServicesnextEducationnextSchools of our CommunitynextLaindon High Road SchoolnextAnother 'Memory Day' Reunion at Laindon Library 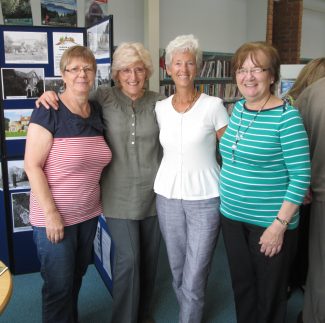 Once again a ‘Memory’ Day’ provided the venue for a school classmates’ reunion.  Four girls met in Laindon Library for the first time after leaving school in 1961/62.  Nina Burton and Helen Brown had arranged to meet on Saturday after 51 years.  Helen also brought along Valerie Theobald and Maureen Card.  Nina, Helen and Valerie had started in the same class together at Markhams Chase school in 1951.  Maureen joined them at Laindon High Road School in 1957 having attended Langdon Hills School.  Valerie and Maureen left school in 1961.  Nina and Helen joined the extended commercial course for an extra year and left in 1962.

Helen and her family had originally lived in King Edward Terrace but moved to Roberts Road in the late fifties.

Maureen lived in Langdon Hills and was the daughter of Tom Card who had a fish shop in Laindon High Road.

Warm greetings and hugs were exchanged enthusiastically, followed by two hours of reminiscing and storytelling in addition to an attempt to catch up on 51 years.  All agreed this was wonderful but not nearly enough so have exchanged contact details with the view of meeting again in the not too distant future.

Helen had brought along her school report and autograph book.  She also showed us a photograph of a fashion show in which she took part during 1961 which had been organised through the school by Dorothy Perkins as part of a nationwide ‘Commonwealth Technical Training Week’.

Thankfully libraries no longer insist on complete silence.   In fact I noticed one or two people smile when they heard our laughter and chatter as they browsed their way through the bookshelves.

These occasional small reunions prove to be as enjoyable and successful as larger gatherings that take place in halls.  Long may they continue.