You are here: HomenextThrough the DecadesnextHistory in the makingnextLaindon War Memorial and the Water Fountain

Where should they be located 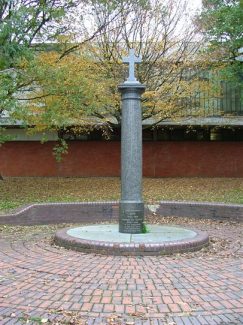 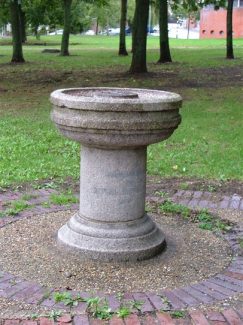 I did not live in Laindon at the time of the dedication and locating of either the War Memorial or the King George V Jubilee water fountain, but they were in their original location until Basildon Development Corporation, started on the destruction, redevelopment of Laindon. I would point out however that though there was a parish of Basildon when they were commissioned, located and dedicated the local council was Billericay.

I would suggest therefore that the Corporation and then Basildon Council can only be considered as the custodians of the monuments on behalf of the residents of Laindon and District.

I am pleased to see that the Council have asked the residents of Laindon and District where they want the monuments located. It is so unusual for the Council take such action we must ensure that the residents and old Laindoner’s families who were involved in the procurement and who’s relatives are commemorated make their views known.

If there is any cost implications the Council could always suggest the Corporation (Now English Partnership and Homes & Communities) to fund it out of the profits they made out of the sale of the land occupied by the British Legion War Memorial Site, adjacent to The old Laindon School and the Memorial Hall.

The above are my views, Ian Mott

The following are the names of Laindon residents past and present who have e-mailed the site requesting that the Memorial and Fountain remain in Laindon at an Agreed Site.

Joan Ward:  I think that the water fountain commemorating the Silver Jubilee of King George V and the War memorial should stay together at an appropriate site in Laindon.

Fred Taylor:  Please add my name to the petition to retain the memorial and water Fountain in Laindon. They should in my view be kept together, and near the Laindon Centre.

Sonia White:  Please add my name to the partition to keep the War Memorial and water fountain in a prominent position in Laindon.

Joyce Butt:  As an ex Laindoner I would like to add my name to the partition to keep the War Memorial and water fountain in a prominent position in Laindon.

Mr G.W.King & Mrs E.G.King:   Please add my name and also my wife’s name to the petition to keep the war memorial in Laindon.

As ex members of the Laindon British Legion branch, we feel that owing to the fact that the Legion only have a seven year lease and the ever dwindling number of members at the branch could cause it to close. The other point is the area at the branch is frequented by gangs of youths in the evenings and the site for the memorial (at the front of the building) is used as a general dumping ground for fish and chip wrappers and Chinese take away cartons. This would also leave the memorial open to vandalism.

Mr M J Green:     Although I am a member of the RBL I think the fountain and the war memorial should be sited across the road to where they are sited at this moment in time.

The above would like to petition in favour of the war memorial and the Royal Silver Jubilee fountain to be placed at the Laindon shopping centre as this is more central to ALL RESIDENTS.

Ian Dove:  Requested we add his name to the partition

Karen Taylor & Philip Taylor:    Please add my name and that of my husbands to the petition to keep these landmarks in Laindon.  For too long Laindon has been allowed to deteriorate and it is about time people of Laindon unite together to make this an area to be proud of.  I have lived in Laindon since 1987  and have raised two children here.  I look forward to the shopping centre being re-built as it is an eyesore at the moment and such a shame for those people, particularly the elderly who cannot drive elsewhere to do their shopping.

The above have requested their names be added to your petition to keep the war memorial and water fountain in its current place.

Ian Dove: Please add my name to the partition.

Hidi Theodald:  To split these two associations that have a memorable meaning to people who lost, family, friends and strangers who served to protect us and to make this world a better place needs to be thought of very carefully and a mutual agreement of its final locations needs to be a public decision.  A lot of people who fought in this war or were war babies who lived or were born in the lower part of Laindon, king Edward Road and other side roads.

My grandad and dad, uncles, mum, aunts cousins, great nan, nan etc., were a huge part of this, they were the Saltmarshes, Artheys, Theobalds etc.  Please listen to the people and place it in a place that truly represents the history that is left in Laindon. Personally somewhere near the King Edward Road.