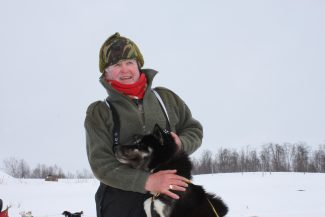 zoom
Jet - one of the huskies
Mike Mackay 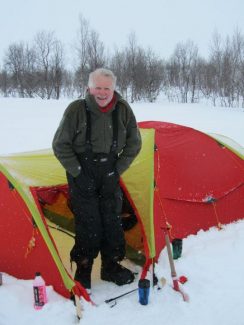 Mike who has lived in Langdon Hills since 1978 has just completed a 250K six day trip across Lapland all the way from Norway to Sweden in aid of Charity ABC – ‘Against Breast Cancer’. He has being doing some thing different every year for various cancer charities and on this occasion he raised over £2000.

Mike said the trip was just amazing even though most of the time he was hanging onto his sledge for dear life as a teams of huskies drove him and others across the frozen wasteland of the Arctic .

He did not undress for a week, the temperature at times reached minus 20, far to cold to change. Although he said that while fully clothed he did not feel the cold.

Mike is a governor of Vange Primary School and has been in and told them all about his experiences in the Artic. He has also linked up by email with a native of the Sami people who are the indigenous people of Lapland . The idea being for the students to learn all about the people of Lapland .

He has run the London Marathon and climb Ben Nevis in the winter on two occasions so far, these are just two of his other charity excursions.

You would expect the artic trip to have been the toughest but no it was the Ben Nevis climbs that he believes were the most dangerous. Saying that he is looking to do it again next winter or the Artic trip again because he just loved the huskies…he is looking for somebody to partnering him on the trips – any takers?