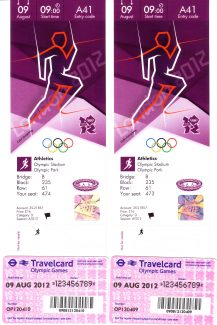 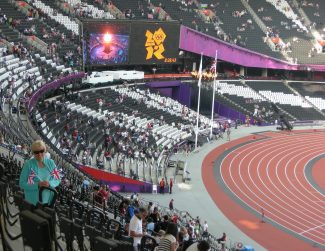 zoom
The stadium - the Olympic flame in the background.
Colin Humphrey 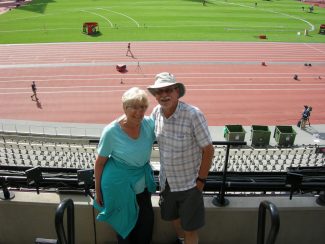 zoom
Saying goodbye to the stadium after a fantastic day.
Colin Humphrey 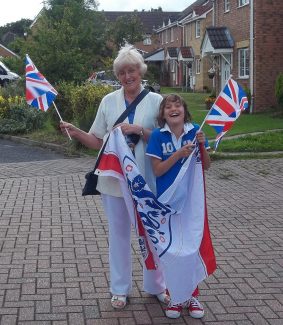 zoom
Ready and on our way to congratulate Max.
Colin Humphrey 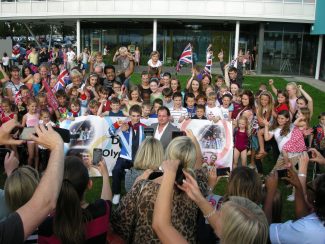 zoom
Max and his coach with the two bronze medals.
Colin Humphrey 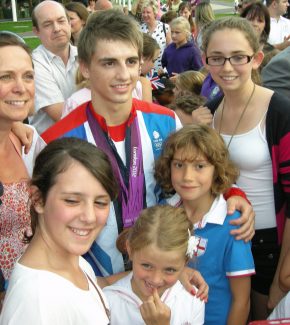 zoom
Max and Phoebe after he autographed her flag.
Colin Humphrey

I have always loved the Olympic games for as long as I can remember.

At home, in our plotland bungalow in Laindon, I listened to the Tokyo Games on the radio in 1964  when Mary Rand became the first woman ever to win a Gold medal for Great Britain.  I watched The Mexico Games in 1968 on my parents little black and white TV.

Since then it’s been fantastic to see the games transmitted in colour, especially on today’s wide screen televisions.  However, I could only dream about actually going to one myself, until that is,  Colin was lucky enough to win two tickets in the draw last year.  We could hardly believe it.

Throughout the year it still felt surreal until in July when the tickets were delivered to our door, we signed for them and held them in our hands.  Yes, it was true and we finally believed we were actually going to an Olympic Games.

On Thursday 9th August 2012, we were up very early and soon on a train bound for the Olympic Park at Stratford.   We walked from West Ham station and following an airport type security check-in, we stepped into the park, aware that we were treading in the footsteps of our grandparents who had once lived in that same Stratford area many years ago in very different circumstances, before moving down here.  We wondered what they would have thought of the Olympics being held on what had been their previous doorsteps.

The inside of the stadium almost took our breath away when we saw it with our own eyes for the first time.   We couldn’t have had better seats if we had chosen them ourselves.  High up above the ‘back straight’, in the shade and with a perfect view of everything including the cauldron holding the Olympic Flame.  The atmosphere in the stadium was simply fantastic, 80,000 people in carnival spirit, having the time of their lives.

When Team GB’s men’s 4 x 400m relay squad entered the stadium to compete in their heat,  the roar from the crowd was deafening and increased with each lap.

They went into the lead on the anchor leg to the chant of “GB, GB, GB”  so loud that I wouldn’t have been surprised if it could be heard in Laindon!  Team GB crossed the line and tied for first place, securing their place in the next day’s final.  The crowd erupted and I’m sure would have raised the roof, if it had had one.

When 4 pm arrived, our session came to a close, leaving us quite hoarse from cheering, we left the stadium and had to keep pinching ourselves that we had actually been to an Olympic Games.

Who would have thought that a little girl who once lived in a plotland bungalow in Laindon would ever have had such a dream come true.  But it did and in London’s East End at GB’s best Olympic Games for 100 years, probably their most successful ever.

And it didn’t end there. Our 9 year old granddaughter Phoebe who lives in Langdon Hills, goes to Gymnastics Club each Monday at Basildon’s smart new Sporting Village, where Max Whitlock trains.

We were thrilled when he won two bronze medals at the Olympics.  On 14th August, a ‘welcome home’ was arranged for him at the club and we took Phoebe along.

A large crowd welcomed him enthusiastically with cheering, flag waving and lots of party poppers.  He spend about 20 minutes signing autographs on various objects for his young fans, including Phoebe’s flag.

He was then interviewed for ITV’s 6 O’Clock news and had his photograph taken with many of his little admirers.

The event rounded off an amazing and unforgettable Olympic Games and inspired our already sports mad granddaughter.