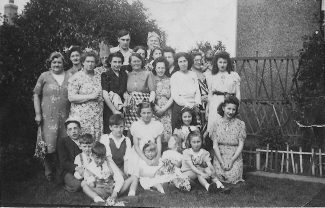 The above Photo found in the family collection of  Thelma Oliver nee Savage nee Waters was taken at a Victory In Europe Celebration at Bungalow “Trecarne” in Berry Lane with family and some friends and neighbours.  Thelma remembers she was 15 years old at the time. “Trecarne”  was the Home of Mr William and Mrs Alice White and their two daughters Nova  and Joan.

Joan is now Joan  Goodfellow who contributes to this website.  William and Alice were the Aunt and uncle of Thelma.

Back Row :Two Men Mr Ashdown, Larry ( he was an Irish labourer who lodged at “Trecarne”  and working on the construction of the prisoner of war camps at Langdon Hills).

Thelma is unsure the names of who the other children seated at the front are except for Nova White who is next to Thelma but seated on the ground.

When proceeding up Berry Lane from Emanuel Road “Trecarne”  was to be found on the right hand side of the road just before the bend prior to Samuel Road.

The Ashdown’s in lived in one of the turnings  off Berry Lane above Samuel Road all the families knew each other well.  Thelma says Mr Ashdown was a Joiner and made her a polished wooden sewing box. In later years when living at Billericay, Thelma taught piano to Peter Shaw the son of  Ernie.