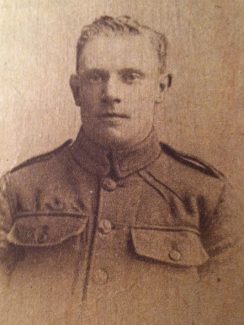 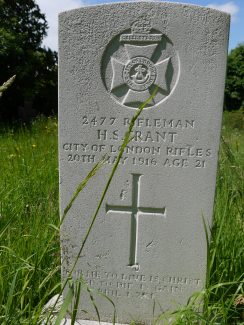 It is assumed he enlisted in London, joining the 6th Battalion London Regiment (London Rifle Brigade) as a rifleman; Service number 2477

He was the son of Samuel Henry and Alice Grant of ‘Midhurst’, High Road, Laindon. The area at the time was part of the Laindon Station Estate and was in fact in the parish of Little Burstead. He died on 20 May 1916.

The family including Herbert were living there at the time of the 1911 census and his occupation is stated as ‘Booking Clerk’. We are not sure exactly when he enlisted or when he arrived in France but we believe he saw some early action.

Five months later on 18 March 1915 they landed at Le Havre. It is assumed that he went over on the SS Marguerite, the same vessel that Ken’s grandfather, Fred Pitts was on. It would be nice to think that they knew each other.

The first battle the 6th and Herbert was involved in was the battle of Festubert that commenced on 15 May 1915.

The next major offensive was the Battle of Loos. It was the third time that the British used the tactic of tunnelling underground and getting as close to the German lines or beneath them to detonate large amounts of explosives in an attempt to disrupt the enemy defences.

They also used chlorine gas but it was not that successful as in some places the gas was blown back into the British trenches. Also the gas masks were very primitive and many soldiers removed them because they could not see through the fogged up eye-pieces or breathe properly. This meant that many of the British soldiers were badly affected by their own gas.

The battle started on 25 September 1915 and mainly through superior numbers the British managed to capture the town of Loos, but due to the considerable number of casualties the fighting subsided on 28 September with the British having retreated to their original positions. Although there were a number of skirmishes by both sides in the following days, the fighting ceased on 13 October.

Although described as a British Victory, the British did not gain any ground and their losses were similar to the Germans. There were a number of notable deaths, two in particular being: (1) Captain Fergus Bowes-Lyon an older brother of Queen Elizabeth the Queen Mother and uncle of Her Majesty Queen Elizabeth II. (2) Lieutenant John “Jack” Kipling only son of the writer Rudyard Kipling.

The Loos memorial commemorates over 20,000 officers and men who fell in the battle and have no known grave.

As Herbert had died at home our first reaction is that he had died from wounds received in the battle for Loos or through effects of the gas but no. A report in the Essex Newsman informs us that Private Herbert Samuel Grant, London Rifles, 22 years old, son of Mr. S.H. Grant formerly of Valetta, Belle Vue Road, Southchurch and now of ‘Midhurst’ High Road Laindon while boating in the River Gripping at Ipswich, was thrown from a canoe and drowned on Saturday 20 May 1916.

Then in the 3 June addition of the Essex Newsman and the Chelmsford Chronicle we find the following report of his funeral at St Mary and All Saints, Langdon Hills:

“The funeral of Pt. Herbert S Grant, 21 of the 2/6th City of London Rifles, took place at Laindon Hills on Saturday, with full military honours. The remains were taken from Ipswich Barracks, on a gun-carriage, by an escort, with regimental band and conveyed to Billericay. There the cortege was met by Mr W. Grant (Uncle) of Lovelace Gardens, Southend and proceeded to ‘Midhurst’ Laindon, the residence of the deceased’s father Mr Henry Grant, under the charge of the Lieutenant Lathbury and an escort of sixty N.C.O.s and men. At ‘Midhurst’ the procession was joined by detachments of the Essex Volunteer Regiment, the Special Constables and Royal Berkshire Yeomanry. The service at the Church of St Mary and All Saints, Laindon, was conducted by the Rector, the Rev. G. J. H. LLewellyn, assisted by the Rev. J. W. Lindsay. D.D., vicar of St Erkenwald, Southend.  Mr Joliffe Pawley was at the organ and the choir was augmented for the occasion. The service throughout of the most impressive character. Dr Lindsay spoke of the qualities of the deceased which had endeared him to so many in Laindon as well as Southend and in Ipswich. At the graveside the committal was read by the Rector; three volleys were fired and ‘The Last Post’ was sounded.