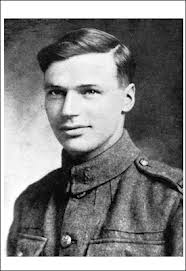 Leo was born in Wentworth, Ontario, Canada on 1st December 1892 to Henry Trevelyan and Rosetta Clarke.  Henry was the son of Beaumaurice Stracey Clarke who from 1883 to 1897 had been rector of Laindon-cum-Basildon. My interest in this story is threefold, not only because Leo, Beaurmaurice’s grandson won the V.C., he was involved in the Battle of Flers-Courcellette that my grandfather Frederick Pitts was injured in and that my Great Great Grandfather Nathan Beardwell moved with Revd. Beaurmaurice from Boxted, Essex as his Groom and Gardener.

Henry (born Boxted, Essex) had moved to Canada when he was 18 in 1887 but just over a year after Leo was born the family moved back to Billericay where Henry started up a vegetable farm business. So Leo spent his early years in and around the Billericay, Laindon area with the family attending St Nicholas Church, Laindon. It would appear that Leo moved back to Winnipeg Canada in 1903, a year before the rest of the family.

By the time the First World War commenced Leo was working as a Surveyor for the Canadian National Railway in the Canadian North. He returned to Winnipeg and enlisted in the 27th Battalion and after arriving in England in 1915 he transferred to the 2nd (Eastern Ontario Regiment) Battalion, Canadian Expeditionary Force to be with his brother Charles (Born ? Essex).

On 9th September 1916 the prelude to the main assault of the Battle of Flers-Courelette schedule for the 15th, three Companies of Clarke’s battalion, Clarke at the time was Acting Corporal, were assigned to take a section to clear the enemy from a 50 yard long salient between the Canadian position at Mouquet Farm and Courelette to the north. This was to enable the Company Sergeant to build a fortified dug out that would secure the Canadian position once the salient was over run.

When his section reached the trench, it was so heavily defended that they had to battle their way through with hand grenades, bayonets and their rifles as clubs. Clarke was the only man left standing; the rest had either been killed or wounded.

At that time, about 20 Germans, including two officers, counter-attacked. Clarke advanced, emptying his revolver into their ranks. He then picked up two enemy rifles and fired those too. One of the officers attacked with a bayonet, wounding Clarke in the leg, but Clarke shot him dead. The Germans retreated, but Clarke pursued, shooting four more and capturing a fifth. In all, Clarke killed 19 of the enemy, capturing one.

In a 1916 letter to his own uncle Arthur in England, Leo retold the event for which he was posthumously honoured: “You’ll be glad to hear that Charlie and I were both recommended – Charlie for the (Distinguished Conduct Medal) again and I for the (Victoria Cross). I don’t know whether I can tell you all about it or not, but I killed 18 Germans, including two officers with my revolver alone. And, inflicted many casualties on the enemy with bombs, also, put one machine gun out of action and all I got was a slight bayonet wound in my leg caused by one of the officers who I killed before he got me. I also got a sore back caused by the explosion of a German bomb – main thing is, I’m still here and very much alive.”

For most conspicuous bravery. He was detailed with his section of bombers to clear the continuation of a newly-captured trench and cover the construction of a “block.” After most of his party had become casualties, he was building a block when about twenty of the enemy with two officers counter-attacked. He boldly advanced against them, emptied his revolver into them and afterwards two enemy rifles which he picked up in the trench. One of the officers then attacked him with the bayonet, wounding him in the leg, but he shot him dead. The enemy then ran away, pursued by Acting Corporal Clarke, who shot four more and captured a fifth.

Clarke had to be ordered to leave the battle to have his wounds cared for but he was soon back in the thick of it and on 11th October while moving forward with his battalion to secure a newly capture Regina Trench a shell fell behind him as he was crouching in a hole and the back of the trench caved in, burying him.

His brother Charles dug him out, but he was paralysed with a crushed back and injured spine. He was taken to No 1 General Hospital but died on the 19th.

He had written to his parents just before his death saying ‘I don’t care so much for the V.C. as getting home for a couple of months’.

He is buried in Elretat Churchyard, 16 miles north of Le Havre. In the spring of 1917 he was posthumously awarded the V.C., it was presented to his father in front of 30,000 by the Duke of Devonshire Governor General of Canada.

A plaque in his honour has been erected by the Ontario Heritage Foundation at the Royal Canadian Legion branch in Waterdown, also a bronze plaque on a lamp post in Valour Road, Winnipeg, Manitoba.

In my research I have read many courageous and brave exploits but Clarke’s heroism tops the list.

Though the 1911 and 1916 Canadian censuses records show that Leo was born in Canada under the heading “racial and tribal” it states English. So although I understand that Canadians see him as one of their V.C. Heroes, I believe, Laindon/Billericay also has a great claim to one of our V.C. Heroes.