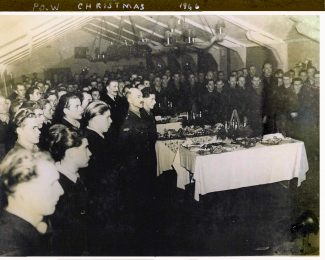 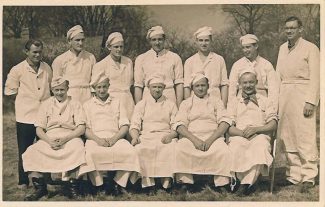 At the top of Langdon Hills on the corner of Dry Street is a field we know today as Beacon field but back in the mid 1940s it was the home of a German POW camp known as Hutted Camp 266. It was a working camp and a transit camp. POWs would come to the camp be registered and sent on to satellite camps – Purfleet and Tillingham being two.

The house opposite the field called ‘The Climax’ was commandeered by the military and became the home of the Camp Commandants .

We are not yet sure when the camp was built or its initial requirements. It is possible it was built as early as 1943; however we do know that the first POWs did not arrive until April of 1945.

It could officially house up to 800 prisoners, though at times this number appears to have been well exceeded. They had their own Chef’s, Doctors, Mechanics etc and two very good bands that use to put on concerts where the locals were often invited. They also produced their own newsletter, one of the few camps that did.

Towards the end of the war the POWs were put to work on the fields, damage work etc and many of them found English girlfriends married them and stayed behind.

The camp eventually closed in September 1948 when it was taken over by Shell to house its workers at Coryton. Shell moved out in 1951 and though the Local Council and the Basildon Corporation considered using the facilities it was eventually demolished. In the late 1950s and early 1960s it became the home of Westley Cricket Club before reverting to a picnic area for those visiting the country park.