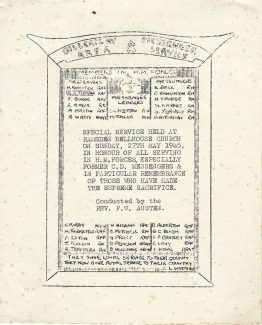 Researching through some old newspaper clippings that had been handed to Basildon Borough Heritage Group by the Echo newspapers, we came across an Order of Service in honour of all those serving in H.M. Forces, especially Civil Defence (CD) Messengers. The service was held at Ramsden Bellhouse Church on the 27th May 1945 and was conducted by Rev. F V Austen.

On the left hand corner of the pamphlet you will see the name ‘H Rossiter’. Harry is an old Laindon and Langdon Hills boy but now lives in Exeter. He is a sprightly 95 year old with a tremendous memory.  So I gave him a call and the following is his memories of being one of the Civil Defence Messengers in Laindon during the early years of the Second World War.

‘ In August 1938 having reached the age of 16, the senior scout movement known in those days as Rover Scouts was my next progress in the scouting organisation. The main aim of Rover crews was the engagement in some kind of public duties. In 1938 we were all aware that Great Britain would soon be at war and one of the tasks undertaken by government of the day was the issuing of anti-gas respirators to every GB citizen.

To this end a centre was set up for any person to attend and be issued with gas masks, as they became known. St Nicholas Church Hall (known by many of us as St Peters Church Hall) situated on the corner of Laindon High Road and St Nicholas Lane became the issuing centre and the Rover crew made themselves available to assist in this task. I was among these volunteers.

In April 1939 a training course was set up for dealing with any poison gas, which might be used against us. I attended this course with the instructor being one Major France, at Laindon High Road School; who taught us all that there was to know about the types of gas, how to recognise each one and how to combat them. I still have the certificate somewhere.

Then we learned of the formation of the ARP that is the Air Raid Precautions organisation and teenagers in particular were invited to enlist as cyclist messengers. The man given the job of organising such a service was a Mr Charles Western. Our first meeting place was Toomey’s garage in Laindon High Road which had become the temporary AP Centre.

The messenger service became a well organised one and we all met at Barleylands Farm and other older people helped to enlarge us into a district service to have branches at other towns such as Billericay, Wickford, Nevendon, Ramsden Crays etc.;

Why cyclist messengers? They were meant to form a vital means of communication in the event of breakdown of the telephone system. I found myself attached to the Main First Aid post situated near Laindon Railway station.

In early 1940 ARP changed its name to Civil Defence (CD) and a uniform of dark blue, steel helmet and civilian duty gas mask became standard issue to all members. The first aid post was manned by all members of the St Johns ambulance brigade including of course the nurses and Dr Dharm Sheel Chowdhary, the doctor who made himself readily available.

Dr Chowdhary, born in the Punjab India became a legend in Laindon. He was an outstanding medical man never failing to answer any call for his very capable medical skills. During his undying service to Laindon citizens he must have traipsed many miles along unmade side roads in all weathers, I feel honoured to have known him personally.

Anyhow this is meant to be about the district messenger service. We never received any CD uniforms apart from a steel helmet with a white letter ‘M’ painted on it and the CD respirator. For a common sense reason, we would soon expect to be ‘called up’ for military service.

To keep us occupied, Charles Western decided to stage a concert and it was planned that all who wished to take part should do so. Its title was “Messenger Pie”. I remember the show which was repeated around the district, opened with a cheery song and verse which went thus:

When pie is opened the messenger sing.

Here is a show that is fit for a king,

Have a good helping of messenger pie.”

What followed was a serious of short humorous sketches in which everybody was involved and it was all a great success.

Thank you Charles Western. His name should be remembered for his undying enthusiasm. His is the only name I can call to mind. After all it was a long time ago, he eventually joined the Royal Navy.

Many messengers never waited to be ‘called up’ and six of us joined the RAF and flew with Bomber Command. Several paid the ultimate sacrifice and are never forgotten.’