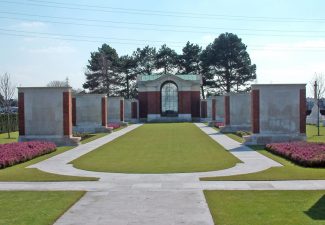 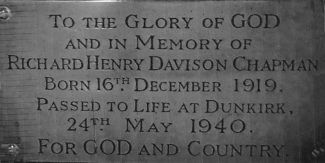 On the credence table in the Sanctuary of St Nicholas Church, Laindon is a brass plaque in memory of Richard Henry Davison Chapman who died at Dunkirk on the 24 May 1940. The Commonwealth Graves Commission gives his date of death as 31 May 1940, it’s possible that he died of wounds. The evacuation at Dunkirk during World War 11 started on the 24 May 1940 through until 4 June where over 300,000 men were evacuated.

He was a driver, service number T/82468 with the 3 Corps Petrol Park, Royal Army Service Corps. Born in West Ham and son of Richard John and Phyllis Emily Davison Chapman who were living at Harrow at the time.

He was buried at the Dunkirk (Dunquerque), Department du Nord, Nord-Pas-de-Calais, France and his name appears on Column 135 of the Dunkirk Memorial.

The question is what was his connection to Laindon? So if there is any family member or friend who can supply any further information of our hero, please get in touch.