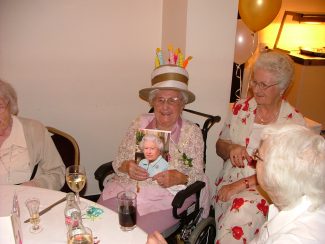 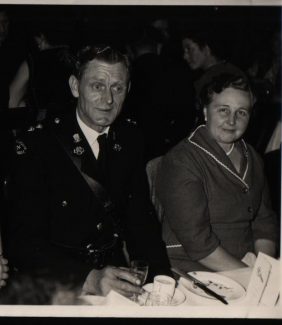 Ivy, who was born at No.5 Railway Cottage, Laindon and is now living with her daughter, Joan in Outwood Common, Billericay, reached the tender age of 100 in August 2009 and remembers quite clearly the day the Second World War, was declared.

11.15am Ted, my husband, was out working with the ARP, when the expected announcement came. My next door neighbours, Bert Taylor and his wife Olive came round to listen to the broadcast and when it finished, we both looked at each other and Bert said ‘what do we do now?’ I replied laughing ‘better get a shovel out and start digging a big hole in the back garden’.

Ted in fact was in the Red Lion pub in Billericay High Street at the time. His office was in the old Town Hall (now Café Uno). He and his colleagues had taken an “executive decision” to have one last drink before the balloon went up and that was where they were when the sirens started to wail, a sound they were soon to become very familiar with.

We were living in Mill Road, Great Burstead at the time and whenever the sirens went off at night we would drag the beds into the passageway where there were no windows. On one of the raids a bomb was dropped at the bottom of Mill Road near the Kings Head. Many homes were damaged. Unfortunately there was an old couple living opposite us and the wife was killed when a piece of wood lodged in her back. Her husband was found several days later over at Orsett where he had drowned himself.

We moved to Archer Road, Laindon in 1940, to be closer to my sisters Daisy, Maud and Beat. Our little white bungalow was cockleshell dashed, rather than the more usual pebbledash. That was quite normal in this part of Essex, with the shells being used from the cockle sheds of Leigh. Not something you see theses days. The front garden faced the High Road school playing field. We did not initially have an air-raid shelter so we used the school one. On one occasion my sister Daisy and I were sleeping in the shelter when a bomb dropped at the back of the cracker factory on the Arterial Road . Daisy in fact was awake and got very scared when she could hear footsteps coming towards the shelter. It turned out to be two very drunk Home Guards men wanting glasses. Well, their Headquarters was the New Fortune of War pub.

Ted received his call up papers and passed various test to become an  ‘RAF Flight Mechanic first class’ but Mr Seaman, the officer in charge of the ARP in Essex kept him back so he could train Ambulance drivers in First Aid and assist in the organisation of ambulance service in S.E.Essex.

We eventually got an Andersen Shelter but this was stolen so a brick one was built. From our Front window we could see the children going into the shelter for lessons, I used to get very uneasy when children who should have been in the shelter were outside messing about.

It was a relief when the war ended and the blackout was lifted and we were able to turn on the lights without having to worry about covering the windows. Neighbours of mine were fined for showing a glimmer of light. That is something I would not want to go through again.

After the War, Ted joined J Toomey Motors Ltd in the High Road, Laindon and one of his jobs was to collect the Prisoners of War from the camp in Dry Street and take them over to Aveley where they were put to work building prefabs. Joan their daughter, sometimes went along for the ride, being only 4 at time the prisoners made a great fuss of her and they made several wooden toys for her. One in particular was a wooden scooter painted red and white.

In later years Ted, along with other members of the local SJAB, was made a Serving Brother of the Most Venerable Order of the Hospital of St John of Jerusalem in recognition of the work they did in the Canvey Island floods of 1953.