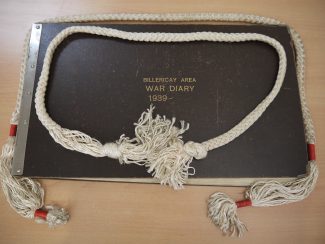 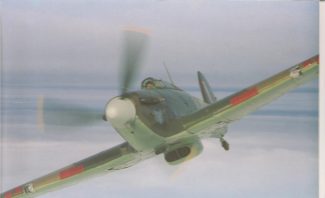 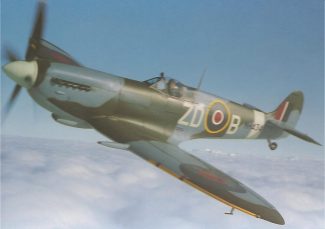 The photograph is of a piece of the parachute cord that is believed to have came from the plane which crashed in the field opposite Markhams Chase School. It was retrieved by Cliff Parkinson who gave it to Miss Janet Duke, head mistress of the school, who then at a later date, passed it to Ann Rugg for safe keeping.

Below is an extract of the incident from the book ‘German P.O.W. Camp 266 Langdon Hills’.

The first major incident which occurred over Laindon, (if we ignore the bombs and incendiary devices that were dropped) took place on the 5th September 1940 when two Spitfires unfortunately collided in mid air. One crashed in a field opposite Markhams Chase School (now Janet Duke School). The School log book records the incident. The pilot of the aircraft was killed.

The initial reports were that the pilot was Robert Barton but on further investigation it is believed the pilot was in fact, Flt. Lt. J T Webster, who was killed. His unopened parachute pack with the words ‘Webster’ printed on it was found a few weeks later by a local farmer, Roland Wilson, in a field north of the Arterial Road in the Nevendon area. Roland later handed the parachute into the Nevendon Police who thanked him for his honesty as the silk which the parachute was made from, was a very sought after commodity in wartime Britain. Another eye witness Percy Calcott, who lived at the Cricketers Pub on the Arterial Road, saw Webster plummet to his death, landing on the north side of the Arterial Road in soft clay. It is understood that the impression left in the ground from the impact of Webster’s body hitting the ground could still be seen over a year later.

In 1964, whilst they were excavating a sewer trench in Leinster Road, Laindon, the Basildon Development Corporation contractors recovered a Rolls Royce Merlin engine believed to have belonged to Webster’s aircraft (R6635).

John Terence Webster had joined the RAF in 1938 and was flight commander of the 41 Squadron that had just transferred to Hornchurch two days earlier on the 3rd September. When he died he had recorded 11 confirmed kills and 2 shared.

The other Spitfire (P9428), which broke into pieces in mid air, was initially believed to have been piloted by Squadron Leader H R L Hood DFC, who was not surprisingly known as Robin. At 3pm Hood led 12 Spitfires of 41 Squadron with orders to patrol Maidstone at 15,000ft. It was a slightly hurried affair and the Spitfires were still climbing when they encountered the German aircraft, a combination of He111s, Do17s and Ju88s which were being escorted by Me09s as they flew up the Thames. Within seconds all hell broke out and in the pursuing action and confusion it would appear that Hood and Webster unfortunately collided with each other at around 3.30pm.

An incident reported at the Essex Record Office has at about the same time an unidentified German plane crashing in flames 500 yards north of the A13 near Gun Inn, Bowers Gifford. One airman was dead in the wreckage, another reported to have bailed out before the aircraft crashed. Maybe it was brought down by Webster or Hood before their collision.

The question still outstanding is what happened to Hood’s body, as reference to a publication by Philip Harvey on the internet under the title ‘is True age Revealed’ believes that his body is possibly buried at Cannock Chase in a grave recorded ‘Unknown’, but initially believed to be that of a German.

Philip Harvey also believes that Webster and Hood did not collide but in fact Webster collided with Flt. Lt. Reg Lovett DFC of 73 Squadron who left asle Camp at 2.55pm in his Hurricane (P3204) with orders to orbit north of Gravesend. Within ten minutes the enemy formation was sighted. ‘A’ Flight led by Lovett attacked the rear of the formation and in the pursuing fight Lovett’s aircraft was hit on the port side and as he broke away, a Spitfire came upwards almost vertically and they collided. Lovett bailed out and landed un-injured near Rochford.

Lovett was shot down two days later on the 7th September and killed. His Hurricane (P3234) crashed near Fritze Farm, Stock near Billericay. Lovett is buried in Hendon Cemetery, aged 26. It is understood that there is a plaque in Stock Church in his honour.

The question of whether it was Barton or Webster, Hood or Lovett just goes to show how chaotic the situation was at the time.

Peter Lucas, local reporter during the 1950/60s in his book ‘Basildon: Behind the Headlines’ mentions that he obtained a small souvenir piece of electrical equipment from the plane marked “Made in Germany”. A mystery is how was that ever allowed to happen, one will never know.

Commonwealth War Grave Commission (CWG) records Webster being killed on 5 September 1940 and buried at Darlington Crematorium. Hood is also recorded as being killed on the 5th September 1940, his name appears on the Runnymede memorial but there is no mention of where he is buried. There is no mention of the death of Barton on this date and we know that Lovett was killed a couple of days later.

The parachute cord (loaned by Ann and John Rugg) along with the Billericay and District War diary will eventually go on display at the Basildon Borough Council Towngate Offices.