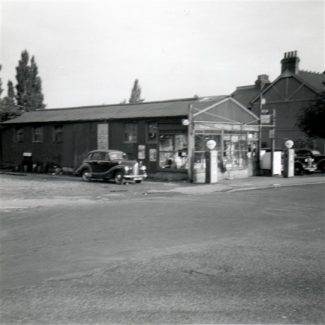 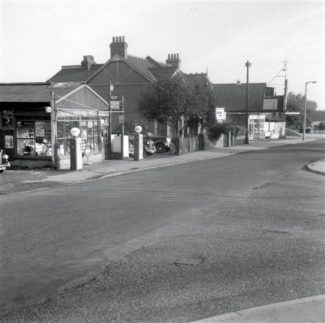 The above photographs and the one later in the article appear to have been taken on the same day but at slightly different angles both looking north. A much earlier photograph taken from the opposite side looking South will be found on page 31 of “Basildon” (Lucas. P., 1991, Chichester, Phillimore & Co., ISBN0 85033 749 6).

This is, indeed, Messrs Parkinson Bros Motor Engineers’ garage in Laindon High Road and the location (north corner of the Somerset Road High Road junction) that is the “real” Parkinson’s Corner, not that at the corner of Durham Road indicated by a plaque. The latter was only ever occupied by the youngest of the Parkinson family (Clifford) after the garage in the pictures was demolished. The roundabout and Laindon Branch Library now occupies the site where the garage, houses and cinema once stood.

The very next house north visible in two of the photographs was the Parkinson family home. Semi-detached and named “Cotteham” it stood next door to its twin “Devonshire House” occupied by the Wilson’s, Mr William Wilson, a pharmacist, being in business as “Wilson The Chemists” These two houses were amongst the oldest along Laindon High Road as it began to expand into a shopping area. Certainly, Parkinson’s was the oldest garage business although, after the Southend Arterial Road (A127) was constructed, they had another garage at the New Fortune of War crossroads as indicated in the photograph to be found on page 30 of “Basildon Behind The Headlines” (Lucas. P.1985, Wickford, Basildon Print. Co. ISBN 0 948796 00 7).

Judging by the aged petrol pumps in the photos the garage was built well before the arrival of electricity in the area. Both were hand operated and I can only remember seeing the gantries extended out to supply to a motor vehicle parked at the kerb side on one occasion. After all, Toomey’s was only a few hundred yards further south and they had electric pumps on their forecourt. It was probably the case that WW2 petrol rationing was a bridge too far for the Parkinson’s to worry about retailing it any more.

Cliff Parkinson never married and lived into his nineties told me before he died that, as the youngest in the family and considered to be “delicate” that he was, on their father’s insistence, educated at home. For somebody delicate he did remarkably well; he was still driving himself about until shortly before his death!
This second of the photographs looking northward shows the turning off Laindon High Road that is the beginning of the (much altered) “Laindon Link”. This is Road No. 5 on the Basildon New Town Master Plan and it had had to be constructed first in order that the necessary building materials coming from the London direction via the A127 could reach the point at which Basildon town centre was being erected.

Two agricultural tractor drivers whose everyday job was ploughing the fields of Norfolk were recruited and lodged for the period of their engagement in Basildon Drive, Laindon. At a time when most workers, and certainly ploughmen would have considered £5 a week a “good” wage, these two swede-bashers were earning £100 per week driving big earth scrapers backwards and forwards, sometimes for 18 hours a day and often into the late evening when lights were essential, in order to cut away at the hill that lined Laindon High Road to the East.

This was composed of London clay that had been sculpted during the last ice age (see article on site under Natural History). As a result of the scrapers’ efforts the more gradual gradient that exists today off Laindon High Road towards the East was created. From their efforts, the spoil that was excavated was transported towards the town centre and utilised to create the embankment over which the Link runs between its two present day junctions with Great Knightleys, and which also embraces intermediately the link across the railway known as “Staneway”. Because of all this massive movement of a material (clay) that is a notoriously unstable, even dangerous medium, time has provided proof that the structural engineers were a little too ambitious in their expectations, so far in two respects and, possibly with time, more will come.

After construction work was completed at the Laindon end the Link, a bungalow that once stood on the west side of Inverness Road close to the top of the clay ridge and thought to be named “Roma”, was left exposed when the soil beneath its foundations was washed away in heavy rain and the building had to be hastily demolished. A retaining wall had, also, to be hastily constructed to prevent further erosion.

A further problem arose at the other end of the Link; here where soil had been built up a number of newly built dwellings built on unstable ground in “Winter Folly” had to be demolished due to settlement at great inconvenience to their occupants.

As usual, there is an irony attached to this story. Due to constant interference with the Master Plan’s concepts, Laindon Link is no longer used as planned. For safety reasons it is closed off to all except PSV vehicles!

One of the Parkinson’s’ employees was, for a time at the beginning of WW2 a driver for the Eastern National Bus Co who was moonlighting, as it is called, as a mechanic for the Brothers. His name was Bernard Briggs. One day, my friend, John, and I decided to look into the wide open door of the Parkinson’s’ garage purely out of curiosity, drawn by the sounds of industrious activity inside. Our curiosity was not allowed to last long because Bernard appeared and told us both to “sling our hooks!”. My friend’s surname was ”Briggs” and Bernard was his dad! And where did the Briggs live? Why, it was “Roma”, Inverness Road.