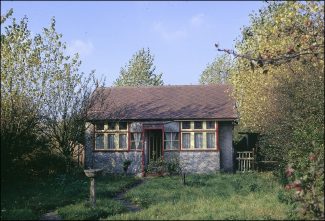 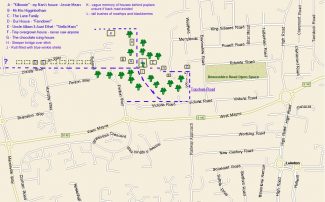 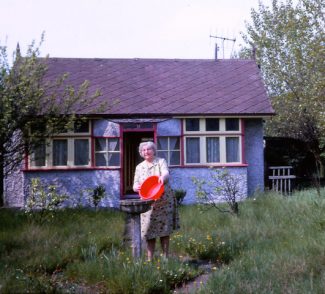 zoom
My nan, Jessie Mears at Kilbowie circa 1962 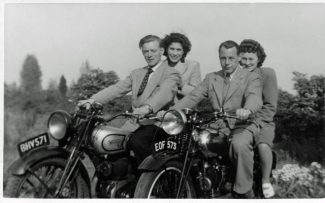 zoom
My Mum and Dad at Ferndale, Topsham Road on the Triumph and their friends Ted & Stella from Hainault circa 1950

My parents and I lived in Topsham Road (now gone – it was between Laindon and Dunton) until 1953 (when I was 2), when they moved to Hornchurch. The house was called Ferndale. My uncle and family lived next door in Stella Maris and my nan lived in Kilbowie (I will attach a colour photo of Kilbowie). They all moved there after their neighbourhood in Stratford, East London was bombed in the blitz.

The photo of my nan’s house was taken mid 60s, before the council’s compulsory purchase (£500) to demolish it for the trading estate.

My nan’s husband was one of seven men killed in the 1957 Dagenham train crash. I used to spend summer holidays with my nan at Kilbowie from 1959 to 1962 and have many fond memories of the bungalow and old Laindon. The journey from Hornchurch was by an Eastern National bus to the ‘Fortune-a-war’ or ‘Hiawatha’, which, if I remember right, was outside the police station at the bottom of Victoria Road. After 1961 I used to cycle there.

The police station had a tidy and colourful flower bed and opposite, on the crossroad was Greens, with shiny dark green ceramics under the window and I believe, also the old brass capsules running on overhead wires between the counters for change (though that may have been a different shop).

I am attaching a relatively recent map with my additions showing where Topsham Road was and the houses I remember. Victoria Road at that time terminated at Railway Approach. Topsham Road was a single line of paving stones through trees and grass which finished at the point marked ‘H’ – after that it was mud and grass with the odd railway sleeper to cover the worst mud holes and other puddles were filled in regularly with blue winkle shells (from Pitsea, Leigh or Vange, I believe).

I can see the whole place very clearly in my memory and the clouds of butterflies, moths and grasshoppers that filled the air when I walked around there on summer mornings, with net and hole-in-the-lids sweet jars.

Fond memories also of going with my nan to the Winston Social Club at lunchtime, meeting Fred the retired postman (once with half a pig’s head in newspaper) and also some nights; thrupences for the jukebox (Del Shannon, Runaway), a glass of coca cola and going for fish and chips nearby (1s 2d – which my nan thought was a rip-off). We’d walk home on very dark paths (none of the roads off the main road were asphalted or lit) looking at the stars, watching bats and singing very loudly.

I was very lucky to have those years in rural Essex and really wished I’d not gone back to look when I was 45. As James Taylor sings, ‘They say you never go home again, and that’s no lie’.