The Residents of Laindon and Langdon Hills, Essex. Tender to Your Majesty their Loyal and Affectionate Greetings on the occasion of your Coronation.

I have to admit I remember very little of the Queen’s Coronation other than I watched it on a small black and white television in the front room of our house in Pound Lane. I believe it was a Bush television with a magnifying glass cover attached to the front of it. I vaguely being given a Coronation book from school but that has long disappeared.

What has prompted me to think of the Coronation is not the wedding of Prince William to Kate Middleton or the Queens Diamond Jubilee in 2012 but a Laindon and Langdon Hills Souvenir Programme I have just been given.

I had never appreciated that a local committee had organised a week long of celebrations commencing on the day she was crowned, 2nd June 1953. 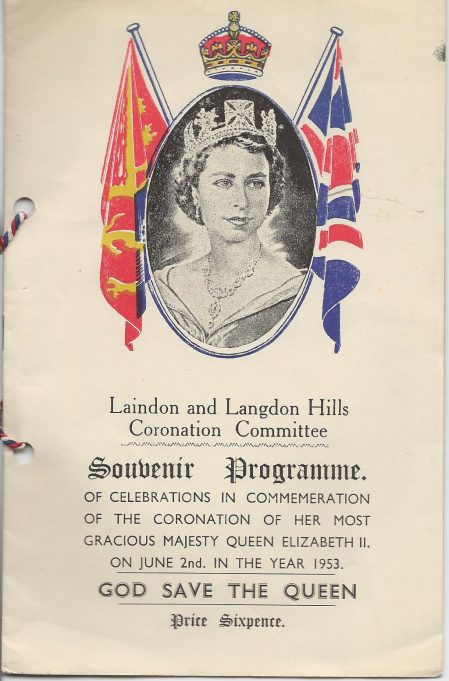 The programme opens up with a printed message to the Queen:

The Residents of Laindon and Langdon Hills, Essex . Tender to Your Majesty their Loyal and Affectionate Greetings on the occasion of your Coronation.

The week’s celebration commenced on the 2nd June with Special Intercession Services for the Queen at the parish churches of St Nicholas and St Marys at 8am.

Then in the evening 8pm to 12pm at Westley Heights there was a Torchlight Procession, Square Dancing, Demonstration Team with Rhythm Rangers with the Beacon being lit. The Hill Billy Band led Community singing and a rocket signal was fired at around 10pm.

The Crown Hotel got in on the act with refreshments at popular prices.

On Wednesday 3rd June at 8pm in the Laindon Hotel Meadow the New Repertory Co. presented a play in 3 Acts:

‘Flowers for the Living’

On the Friday 5th June at 8pm it was the turn of the Revellers Concert Party and they presented ‘A Grand Revue’.

Then on the Saturday 6th June, festivities started at 3pm and went onto 11.45pm. The opening was a Grand Garden Fete at the Laindon Hotel Meadow. Then at 7.30pm to 10pm there was a Grand Floor Show and Cabaret by the: St John Glee Party, New Repertory Co, The Revellers Concert Party, Laindon Players, Laindon and District Operatic Society Community Singing with Square Dancing to the Hill Billy Band – “Let the People Sing”.

On Sunday 7th June there was a procession of uniformed and other interested organisations led by Warrant Officer Carnall from Laindon High Road School led by the Rayleigh Town Silver Band. The procession congregated at the Laindon Hotel Meadow for a Drumhead Service of Thanksgiving (Inter-denominational).

Finally on Wednsday 10th June there was a special children’s day with a pageant by the children of Laindon and Langdon Hills schools.

There where other ongoing competitions:

What a week it must have been and it just shows the community spirit that Laindon and District had 60 years ago. If you have any memories or photographs of this celebrations please get in touch or comment on the web site.