You are here: HomenextBuildingsnextDairiesnextBottled memories of a long-gone farming life 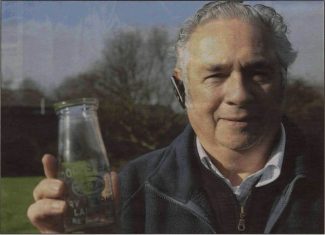 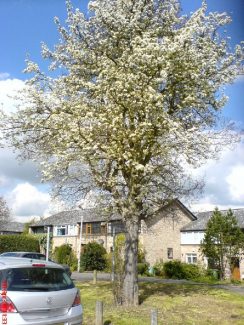 zoom
This is the last Pear tree from orchard that was at "Myosotis" the bungalow my Father William Doodes bulit. Myosotis is where the Doodes Dairy was after the V2 rocket droped, untill 1958. The tree is the last one of the orchard shown on the map between Elizabeth Drive and the Railway. Under a "A" in Chapel
Jack Doodes 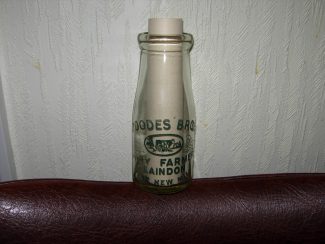 zoom
This is a photo of a half pint botttle with Doodes bros on, used up to 19th Feb 1945 when the dairy was destroyed by a V2 Rocket.
Jack Doodes 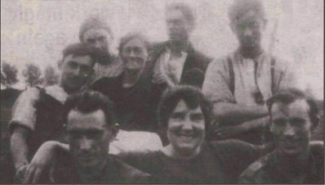 The pictures owned by Jack Doodes are ordinary black and white snapshots, taken outdoors in the summer sunshine in the late Forties. They are the sort of photograph which can be found in millions of family albums up and down the land. Most of them show members of a farming family gathered together at harvest time. Sharing the picture with them are a variety of farm implements, including a tractor and baler. These are all now museum  pieces.  Otherwise, while the pictures have charm and great warmth, you would never think of them as remarkable. Yet as records they are historic and unique.

The striking feature of the pictures is something which the photographer and sitters probably didn’t give a second thought to when these snapshots of the Doodes family were taken. The farmland, which forms the setting and background isn’t photographed for its own sake. But its presence makes these pictures a valuable record of fields and hedgerows, which have now gone forever. The land now forms part of the centre of Basildon. The previously unpublished pictures  give a glimpse of the traditional  farming landscape, which was engulfed by the new town, officially launched in 1949.

At the time of the photographs, the Doodes imagined their time-honoured way of life would simply continue forever, down the generations. They had no idea what was about to hit them. Yet away in London, the Government’s planners had already drawn a ring round an area on the map covering the village of Basildon and part of Laindon, writing the words. Site of New Town. Oblivious to this, the Doodes continued to plough their fields and milk their cows, just as farmers had done on this site for 2,000 years or more. The Doodes worked two separate farms in the Basildon/Laindon area, which were operated together as a single productive unit.

One was the site depicted in most of the snapshots, close to Myosotis, the family home. It lay to the immediate north of the Southend to London Fenchurch Street railway line, still known then by its original name, the London, Tilbury and Southend line. The line of the railway can be identified by the embankment and row of trees in the far background. This farm, Little Bullocks, would bring deep satisfaction to the faces of modern campaigners for locally sourced food. It contained its own dairy premises.

Here bottles labelled Doodes Farm were filled with milk raised from the surrounding fields. The bottles were stamped with a distinctive picture of a cow and the Doodes’ workers both bottled and delivered the milk to local outlets as far west as Dunton.

The other Doodes’ farm was Hunt’s, which stood roughly on the site now occupied by the Echo’s Basildon office and press hall. Hunt’s lay one mile from Little Bullocks as the crow flies, but there was no direct road link. Getting from one farm to the other by road, in those days, involved a tortuous and roundabout journey of several miles, via country lanes. Between them, the farms supported around 40-50 dairy cattle, mostly Friesians and Red Polls. As well as raising the cattle, the family also grew and harvested crops to feed them.

This was the world and the life that Jack Doodes, now 72, knew throughout his childhood. As a boy, he helped out his father, William, on the farms. But the arrival of the new town meant an end to farm life. In the end, both father and son had to seek work elsewhere, in other industries.

William found work with the Ford Motor Company and Jack has spent his career in the agricultural engineering industry. Yet the passing of the decades has done nothing to erase the memories of those childhood pastures. Driving and walking through the housing and industrial estates that now occupy what were once family farms, Jack is able to pinpoint the exact sites, which were once farmhouses and agricultural  buildings.

In one instance, at least, he is able to be even more precise. Jack recalls: “I took a picture of the family bungalow, Myosotis, in 1955. “I was photographing the pear blossom, not the house. What I got was a record of the family home. I didn’t realise at the time it was going to be demolished three years later, in 1958.” Myosotis (botanic name for Forget Me Not) had been built by Jack’s dad in 1930. Its site is now marked by a row of homes in Wickhay, Lee Chapel North. But the pear tree in the foreground of the picture is still intact and immediately recognisable. As Jack says: “Sometimes you’re surprised by how much things change, sometimes by how much they stay the same.”

The Doodes went on working  the farm through the war years. The rhythms of farming continued much as they always had, but they were interrupted by moments of high drama. Early in the war, watched by young Jack, a Spitfire crash-landed in a field at Hunt’s Farm. It came to a halt alongside the brook, which now runs through the eastern stretch of Gloucester Park. “The pilot got out of the plane and asked us where the nearest place was he could make a phone call,” Jack recalls. “We told him where the phone box was, in Rectory Road. The pilot coolly made his way to the red booth and called the airfield to brief them. “Later a trailer came along, they took the wings off, and hauled the Spitfire away.”

The war arrived with far more devastating force for the Doodes family on February 19,1945. A V2 rocket landed on Little Bullocks, destroying the dairy and severely shaking the nearby farmhouse, Fairlight, occupied by Jack’s uncle Arthur, his wife Esther and their daughter Barbara. The damage to life and limb might have been far worse, but for the stacks of oats in the field. “They had been cut and left there, waiting for the threshing machine to arrive,” says Jack.  “They took the brunt of the shock from the rocket.”

One man who lived in a nearby bungalow was killed, and another casualty was the precious tractor, recently allocated to the Doodes by the Ministry of Agriculture. “Those tractors were like gold,” Jack says. “But a bit of shrapnel from the rocket blew straight through the radiator, through the engine block and through the pistons. It was a write-off.”

In the end, it wasn’t the Nazis who defeated the Doodes, but the Commission for the New Towns. Initially, the Basildon developers by-passed the farm. But as the neighbouring plotlands were bought up and the families moved away, so the customer base dwindled.  “It ruined my dad’s business,” says Jack. “Only then did they move in to buy him up compulsorily ” William was forced to take work at Fords. He did a night shift, while continuing to run his dairy operation by day. “He didn’t want to let his customers down, even when there were hardly any of them left,” says Jack. Sadly, by the time the commissioners finally did move in to buy William out, the business he had worked so hard to keep going was almost worthless.

There was worse to come. William was one of many victims of the wicked injustice, which blights the history of the new town. “They said the land was only wanted for allotments, and wasn’t going to be used for development,” says Jack. So the Doodes were granted only the lowest rate for their land, not the full development rate. As so often happens, the CNT then developed the site after all.

The Doodes family remained in the area for the first decade of the new town’s life. One section of their land was to play an almost surreal role in the town’s development. “There was a field called Starvegut,” recalls Jack. It was never very productive.” Starvegut was used as the site for dumping spoil, excavated during the laying of the foundations of the new town. Gradually the once flat land gave way to contoured heights, looking out over the new town and surrounding countryside. Starvegut lives on under the more complimentary name of the Sharpeville Hills, alongside Cranes Farm Road.

Now, memories apart, little survives of the farming days of old Basildon. Jack has moved away from Basildon to another part of south Essex. Yet he does retain one evocative item of memorabilia – an original Doodes milk bottle. The once humdrum object is now preserved as a precious piece of family heritage. “As far as I know, it’s the only one left,” he says.

“If anyone out there knows of any others which have survived, I’d love to know. We used to take them for granted. Now it’s a piece of history.”

Through the years between the First and Second World Wars, Gunner was a core asset on the Doodes farm. The big horse did  much of the work ploughing the fields.

But Gunner hadn’t been born to  the plough. As his name suggests, he was an ex-military horse. A former serving ranker in the Royal Horse Artillery during the First World War, Gunner had been trained to pull big field-guns, at the gallop, and under fire.

Jack Doodes recalls: “When my Uncle Henry Doodes bought him, he had only been taught two commands, ‘Gallop!’ and ‘Stop!’.

When he first arrived at the farm in 1919, Gunner had great difficulty getting the hang of field work. Whatever he did, he did it at the gallop.”

Gunner had to be painstakingly taught that ploughing and harrowing were jobs conducted at walk pace, not treated like the Derby stakes.

Gunner was purchased by Uncle Henry at the Elephant and Castle horse market in south London. Jack recalls: “He walked Gunner as far as Barking, which was at the edge of the countryside in those days. He found a five-bar gate and used it to mount Gunner, who was a big, tall old horse. Then he said ‘Giddup!’.”

Not much imagination is needed to work out what followed. After brushing himself down, Henry stood up in the road and went off to recapture Gunner.

“Somehow,” says Jack, “they managed to get back to the farm.”