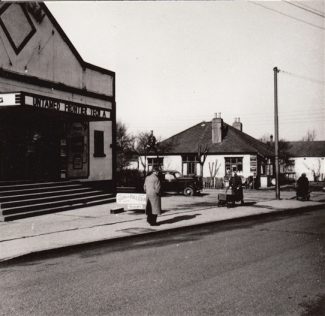 I hope this continued story of my early years in NORTHUMBERLAND AVENUE will be of interest.

I make no apology tor my personal experiences because we are at a time when (although I did not know it) we are about to go through some 5/6 years of wartime/austerity and the impact this had on our early life.

We are at the beginning of September 1939 and I was approaching my eleventh birthday. Unlike Mother, we could not find the news of the outbreak of the war very daunting but then I doubt many children would. Mum, of course, was terrified at the prospect. She had seen so much of the First World War when she lived on the East End of London and she recalled the horror of it all then (only some 20 years previously).

My Father served in the army during the earlier conflict, although like many men of that time, he rarely talked about events (to us youngsters anyway). As you know, in those days “children should be seen and not heard”. I do know he was injured whilst in France because I saw the bullet wound scars on his leg.

My eldest brother, Tom, was just beginning his time at Chelmsford Technical College. I was about to start at Laindon High Road Secondary School and youngest brother, Ron, was still at Langdon Hills Junior School.

So you can understand the atmosphere indoors at this time seemed very tense.

Adapting to the situation was not easy. We could not, as children, see the urgency as the parents did. Not much happened in the early months – getting prepared for what was expected to take place -we were all busy. Apart from the day to day chores (and there were plenty of these), windows had to be blacked out, air raid shelters constructed etc. In our case the “Anderson Shelter” had to have a base partly below ground, all constructed in concrete, with the corrugated iron sheets above (a bit hazy on this) and mountains of earth piled on and around the iron sheets (very damp inside!!).

We must not forget that when the London blitz started in 1940, a lot of our family – aunts/uncles/cousins – were really in a worse position than one could imagine Many lived and worked in the East End so there was naturally much concern for them.

Life for me and my brothers still had to go on – Junior School in Langdon Hills Primary and then on to Laindon High Road Secondary school – looking back it is difficult to believe we spent virtually all our early teens and much school time in the war years, but somehow people managed to cope. A lot of the schoolteachers went into active war service so there was a predominance of female teachers at many schools.

Although Mum took the brunt of day to day living, Dad had an important job of keeping gas supplies going in the Southend area, working long daylight hours unloading coal barges that came onto the Gas Works pier at Southend on Sea (that’s another story).

Life was hard in those days as well as worrying. Although there was a lot of “self sufficiency” in the garden and care of poultry, other essentials were hard to come by. How the ladies managed to get meals needed I will never know! Having said that, Christmases always seemed enjoyable occasions with some special treats.

Holidays away were non-existent but trips to Southend would continue during the early war years, despite the uncertainties and river defence.

People made a lot of their own entertainment at home – we had a piano but I am ashamed to say I never really mastered it! I did have some lessons with Mrs Spencer who had a music shop in Langdon Hills (opposite Elseys the Off Licence) at the time. The radio came to us just before the War keeping batteries/accumulators (HT/LT) charged was vital – you can imagine how popular you were if, when it was your turn, you failed to either take or collect batteries/accumulators from the electrical shop (I think it was Johnsons, next door to Woodley’s, the sweet and tobacconists shop). No electrical sockets in those days. I can’t remember when we changed to electric lighting but we certainly never had power sockets in our house – TV came to many families much later.

You had to be innovative in those days and money was scarce for things like hobbies etc. I used to make a lot of balsa wood models (hand whittled) as a hobby. The wood was obtained from Markhams Chase Farm not far away. One of their barns was full of scrap balsa wood salvaged, I guess, from crashed aircraft – you could get quite a lot for a few pence.

Not many of us kids had bicycles until well into our teens so we had to walk or not go anywhere at all. I did manage to get second-hand roller skates (none of your fancy nylon bearings in those days). I spent more time at the repair bench than using them. I must admit the road surfaces in those days did give the skates a lot of punishment. Most road surfaces were concrete – not all that smooth.

There was always the Radion Cinema – I can remember queuing for a long time up the steps and round into New Century Road waiting for the doors to open (controlled by a Commissionaire with stern discipline. I think his ghost is still around the Laindon Library, which has now been built on the site at the corner of New Century Road). This was mostly on Saturdays but I guess some weekday evenings as well when we were older. It was always not always high tech as far as projection goes – there was a good chance there would be a breakdown of the reels at some stage (lots of groans from the audience).

There was the annual fair visit in Denbigh Road. We didn’t go on many rides because of the cost and we didn’t have much money to spend but we liked to watch the proceedings and it was exciting with all the lights and music. I was fascinated by the large steam engines that kept things going. I always got told off for overstaying my time!

Meantime Northumberland Avenue changed very little – the timber in Churchill Johnson’s storage had built up considerably during the early war years, used I suppose for building construction (?) (this was a superb playground for us teenagers climbing up the timbers)

As we grew older there was sledging down hills in the Crown Woods, the recreation ground and, of course, St Nicholas Church hill.

Johnny Greenfield got hold of an old motorbike, an old 250 I think, and virtually learned to ride down our road (hardly any traffic in those days). I did attempt it a few times but could never get the hang of changing gears – seems absurd to go virtually the whole distance along Northumberland Avenue in lst/2nd gear then nearly fall off to stop!

My grandparents lived on Primrose Estate and Gran would come down to do weekly grocery shopping mainly at the Co-Op. We loved to watch the money/change shoot along the wire in a canister. This also took place a Greens Stores on the corner of Durham Road and the High Road. There was also Goddens the butchers and of course, Gibsons had two shops in the High Road for greengrocery. We were not hard up for shops of every type including at least six butchers, dress and shoe shops and cafes, etc.

Can’t believe how far everybody walked in those day – we had no choice really.

I became interested in sports – never really very good – but played some cricket in the Summer with the St Nicholas Church team and football in the Winter season with Spartans F.C. We played a lot of the matches on the pitch opposite the Crown Hotel. This was about the mid 40’s and then, because my Father became Chairman of Laindon Football Club (the home ground behind the Laindon Hotel) I got involved and managed to scrape into the 2nd eleven along with John Kennedy, Spud (John) Murphy, Larry Lloyd and many other players. There were some exciting matches played at the Laindon Hotel pitch, albeit a small ground, which could draw crowds of several hundred people and many would be clutching a pint because we were so close to the hotel bar. Very good for business!

Much time was spent keeping the football team going, mostly in the Romford & District Football League including transporting teams to the Romford area for away games. My mother, as I recall, did some of the team laundry each week (and that could get in quite a state). Our home ground at the hotel was low lying, and in the heart of winter became a quagmire very often water logged (happy days)

You have to remember life carried on despite the war years – it was especially hard when the air raids were on both day and night.

I started work when I was 15/16 in the London Docks Harland&Wolfe shipyard. I didn’t stay long there because the VI bombers (doodlebugs) were dropping all over the area. I managed to get a job for a while at the Southend Gas Works office along the sea front. This journey could be hazardous because we usually had to walk about a mile from Southend Central railway station and by this time V2 rockets were being sent over and where they landed could be very unpredictable! I eventually got an engineering apprenticeship with John Mowlem in London, that was in Ebury Bridge Road and the Embankment (plant workshop). This kept me out of National Service until I950.