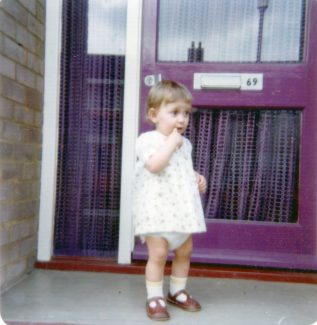 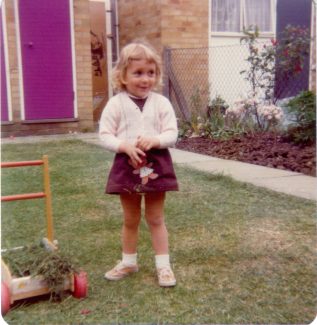 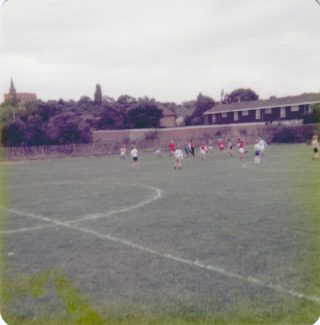 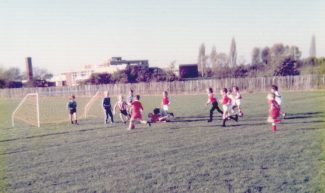 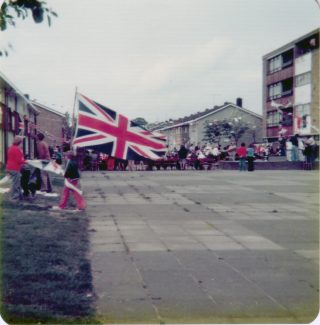 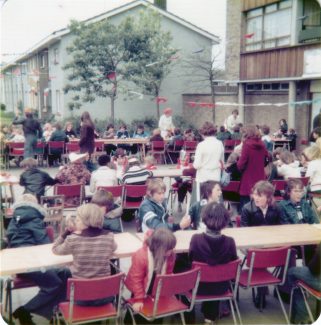 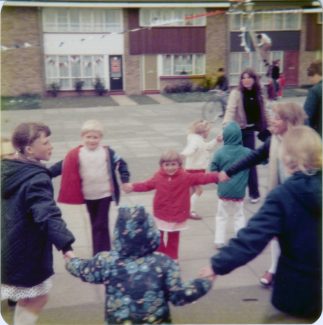 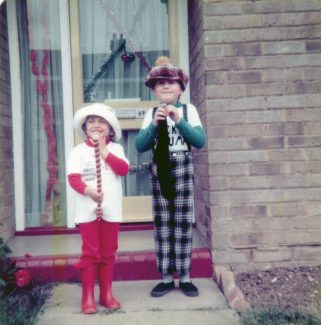 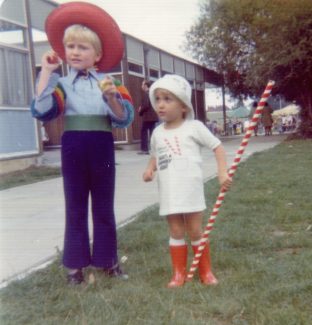 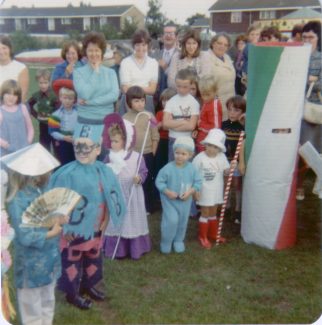 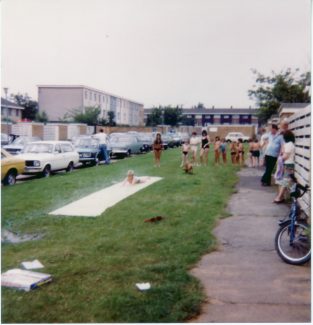 In October 1971 Colin and I, together with our six week only son Mark, moved from our flat in Gyllgrove to a house in Woolmergreen, Lee Chapel North, which was just behind Markham’s Chase school.  Our daughter Michelle was born in February 1974.  We spent 10 happy years there. It was a safe place for the children, as Woolmergreen was a large, pedestrian only square with a shop known as “Greenies” in the middle with flats above and the four branches of Woolmergreen extending out from the square. Mark and Michelle both learned to ride their two wheel bikes in the square. On one occasion Michelle managed to crash into the Woolmergreen road sign and bent it out of shape. It remained that way all the time we lived there.

To the south was a small park, then an alleyway that led to St Paul’s Church hall and the shops. In the alleyway was one small shop occupied by Mr Broughton the shoe mender, a friendly obliging man, who once mended the broken strap on Mark’s school satchel for me.  It was he who made me aware of the “watch out, watch out, there’s a Humphrey about” slogan used in the Unigate campaign. He saw my name on one of his tickets and remarked “Oh, it was you was it”. I asked what he meant and he replied “pinch our milk with a red and white straw!” I was a little puzzled as it was the first I had heard of it. It was just the start of several years of teasing, due to those TV advertisements. Whenever I had to give my name, I was greeted with the accusation “Oh it was you was it”. I even had an anonymous phone call from a group of children singing “watch out what out there’s a Humphrey about” then giggling before replacing the receiver. Lucky our family have a sense of humour and saw the comical side of it all. Michelle entered at least two fancy dress competitions dressed as a “Humphrey Straw” wearing red wellies, hat and tee-shirt printed with the slogan.

Many activities were held in St Paul’s Church Hall. ‘Tiny Tots club’ for mothers with babies under 2 years old, a playgroup for 3 to 5 year olds, dance classes, Brownies and Cub Scouts just to name a few.

I wanted my children to attend Markham’s Chase School as I had done. However, when applying I was told “Sorry but you are not in our catchment area, you will have to apply to Chowdhary School”. So that is what happened. The school’s headmistress was Mrs Aston followed by Mrs Coleman. It had its own swimming pool and we parents went along to dry our children after their lessons. The changing rooms were outside and kept warm by powerful electric fan heaters fixed to the walls. However, by the following winter the heaters had been removed. The children had to change and get dry in the cold even when there was snow on the ground. We parents pleaded regularly for the heaters to be re-installed, but they never were. Apparently, the electricity bill had proved too expensive for Chowdhary’s budget.

During the seventies, many BDC tenants bought the properties they were living in and painted their front doors bright colours and put fences around their front gardens. Some had porches built and extensions at the back. We once painted our door purple – well it was the seventies! We even had purple vision nets at the window.  Chain link fences were replaced with wooden panels and draughty French windows replaced with double glazed sliding patio doors.

The heating provided there in 1971 was an open coal fire with a shed at the end of the garden for the coal store. Having just moved from a one bedroom flat with underfloor electric heating, it was difficult dealing with a coal fire each morning with a new baby to look after, but I managed throughout the first winter. The house was cold in the mornings so I used an electric fan heating to warm the bedroom while I saw to the baby. When he had gone back to sleep, I went downstairs to clean out the grate and start a new fire. Mid morning when the downstairs was warm, I’d bring him downstairs. In the summer, we installed a Parkray with back boiler and radiators and although I still had to clean the grate and build a new fire each day, the fire stayed in all night, kept the house warmer and life was a little easier. Many people at that time were changing to gas central heating although initially many felt that it dried the air so placed saucers of water in various places around the house.

There was a good community spirit and we had some lovely neighbours including a couple of famous ones. Adam Faith’s sister Pam lived three doors along from us for a couple of years and the Fletcher family lived just around the corner, whose oldest son Andrew, became a member of the very successful group Depache Mode. Their tortoise once wandering into our garden so I returned it to Mrs Fletcher who was trying to solve her children’s Rubic’s cube. Many youngsters had one of those in the seventies, along with a chopper bike, ‘simon’ computer game and a Chitty, Chitty, Bang Bang bedspread (we still have one of those tucked away in a cupboard).

We once had a ‘squatter’ in our garden. One quiet afternoon I heard snoring. I traced it to a hedgehog sleeping behind some logs in the corner of our garden. ‘Mrs’ hedgehog chose to give birth to seven babies there so we left her in peace. Then one evening the babies ‘left home’. We watched as they dispersed in various directions out into the big world. One or two of them even climbed over the link chain fence! We rarely see hedgehogs in our garden here in Langdon Hills, but we get plenty of foxes.

A problem during the seventies involved another animal – stray dogs, dozens of them. They fouled the footpaths, ripped open dustbins, fought with each other and frightened the residents. It came to a head for me when a neighbour and I attempted to walk our children to the playgroup. We were confronted with a pack of about eight very large aggressive dogs and we couldn’t get through. We had to hang back and wait several minutes before they ran off and we were able to continue on our way. Thankfully, Basildon Council recognised the problem and appointed Terry Neighbour as their Dog Warden. He did a fantastic job and the situation soon improved. Nowadays a stray dog is a rarity. Most owners are more responsible and since it became unlawful to allow dogs to foul the footpaths, the area has become cleaner due to the bins provided in places where dog owners regularly walk their pets.

1975 was a very warm summer but 1976 became a record breaker.  The hot sun shone everyday from Easter to Autumn, drying out our garden and causing cracks to appear in our back lawn large enough for the children to keep their toys in.

In 1977 the Queen’s Silver Jubilee brought the community even closer together when a street party was organised by a couple of our neighbours, to take place in the square. We each paid a small weekly contribution towards it. It was well organised and featured a tea party, magician (Miss Raindrop), music, dancing and a fancy dress competition. I noticed lots of blue and white bunting on display, apparently supplied by the residents who worked at Fords. However, it was a very gusty day and the beautiful paper covering and decorations on the tables were soon ripped off. The party went ahead as planned and was enjoyed despite the strong wind, but for days afterwards, the surrounding trees displayed flags and bunting which had blown into the branches and become stuck there.

At the end of 1980 we realised we needed a larger property so reluctantly put our little house on the market and began looking for a suitable new home. On the day of the Royal Wedding in July 1981, our children joined in with the others playing on a water slide spread on the grass at the back of our gardens, while their mothers (including me), watched Charles and Diana walk down the Isle.

One afternoon later that year, we experienced torrential rain that flooded our back garden so deeply that we feared it would seep in through our patio doors. Our next-door neighbour’s patio suffered badly and had to be bailed out.

We eventually moved away in December 1981, not without Michelle suffering some heartache as it meant having to leave a picture of her beloved Dougal from the Magic Roundabout on the bedroom wall because it was stuck on. With plenty of assurance from me that the next family moving in would love him and look after him, we said our goodbyes.

Although I have heard that Lee Chapel North “isn’t what it used to be”, I will always have fond memories of the area in which I went to school and where we later raised our children.