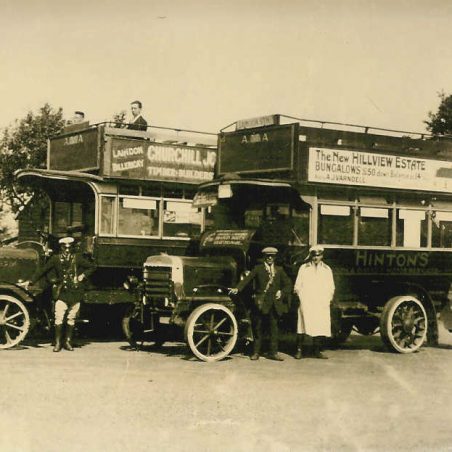 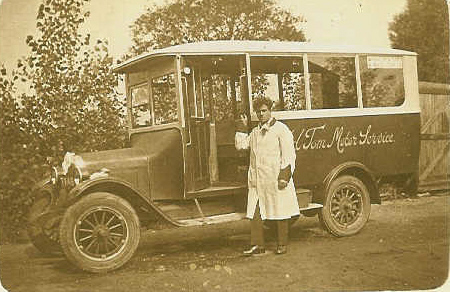 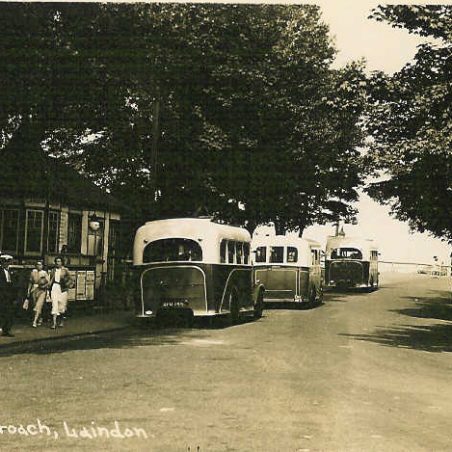 Frederick Hinton and his brother Sidney have been credited with establishing Laindon’s first motorised bus service, ‘Laindon and District Motor Services’. They started with a bus converted from a lorry which they painted blue. About 1921 they acquired two former London General ‘B’ type open top double deckers and a light grey and yellow livery was adopted.

The main route was a daily circular from Laindon Station to the Wash and Pipps Hill area supplemented by market day services to Wickford (Mondays), Romford (Wednesday) and Chelmsford (Fridays) and a service to Billericay Hospital on visiting days (Wednesday and Saturdays). A Saturday service to Brentwood was added later. It was not unusual to see one of Hinton’s buses struggling into Brentwood with up to eighty passengers on board, occupying all available space including the stairs, the driver’s canopy and even the front wings, a sight not to be missed in the early 1920s.

Hinton’s services were replaced by Tom Webster (Old Tom Motor Services) about 1926, though no vehicles appear to have changed hands.

Tom Webster of Manor Road , Laindon started business in 1921 with a couple of Ford ‘T’ bus-cum-lorries, so for several years they were in competition. Expansion came in 1926 with the purchase of four Chevrolets and these were followed in 1927 and 1928 by three Reo Sprinters. The enlarged fleet enabled Hinton’s services to be absorbed.

Old Tom smaller vehicles were more suitable for the narrow local roads than Hinton’s buses and they were able to set up a comprehensive network of services around the Laindon and surrounding area.

When road service licensing was introduced in 1931 Essex County Council objected to Old Tom’s use of the light wooded bridge in Wash Road constructed for horse traffic and the narrow Pound Lane by the former Hinton service between Laindon Service and Pipps Hill. The Council claimed that Pound Lane was as narrow as nine feet in one place. Webster stated that he only used the bridge when it was impossible, owing to floods, to follow the usual route. The Chairman of the Commissioners ruled that they would require a request to place a route restriction in writing and that, if the bridge was not used, the inconvenience of the public would rest on the shoulders of Essex County Council.  For Webster it was stated that the service had been running for ten years and consisted of six buses. On weekdays all the trains were met from 5.56 am until 11.30pm and trains were also met on Sundays. The service operated ‘hand-in-hand’ with the Railway Company and the buses were allowed sole rights in the station yard. The district through which the route ran was developing.

Webster also met with opposition from A.H.Clark & W.H.Malden (Brentwood and District Motor Services), The Westcliff-on-Sea Motor Services and Eastern National when he applied to continue his service between Laindon and Brentwood via Billericay. For Webster it was stated that the service had been introduced in February 1926 and that between October 1930 and October 1931 63,684 passengers had been carried. Webster junior said that the service always ran on time except when the trains were late. They were under contract with the Railway Company to meet the trains. The opposition was on the grounds that the route was already well served.

Licences were eventually granted to Old Tom for the following services:

A Licence was also obtained for excursions and tours from Laindon to Maldon and Clacton during the summer, picking up at Billericay.

In September 1932 the route via Little Burstead on the No. 2 route was discontinued and left to Brentwood & District Motor Services, all journeys now running via Great Burstead. At the end of 1932 the Monday to Friday and Saturday morning services on No. 3 route were curtailed at Bulphan, connecting there with Nugus Saloon Coaches for Herongate and Brentwood . The Westcliff-on-Sea Motor Services alleged in a later public sitting of the Traffic Commissioners that Old Tom had operated illegally beyond Stevens Corner via Rectory Road , Basildon instead of following the licensed circular route for the local service. Journeys on this service had earlier, probably before licensing, diverted off the circular route to serve Crays Hill.

In May 1936 Tom Webster sold out to the City Coach Company for a reputed £8,000. Excursions and the other coaching activities did not fit in with the City business, so the excursions licence was transferred to Betts Blane Ltd (Gidea Park Coaches) of Romford. R.M. (Dick) Webster, Tom’s son, who had managed Old Tom Services since 1931, transferred with the business to Gidea Park Coaches whilst Tom Webster junior set himself up as a nurseryman in Wash Road, Laindon.

The services were numbered by City as follows:

Seven vehicles were acquired by City – a Gilford, two Chevrolets, an A.J.S.Pilot and three Bedford WLBS, but only the Bedfords were used by the new owners. City continued to outstation two or three buses in the station yard at Laindon where ‘locals’ were employed to work and clean them.