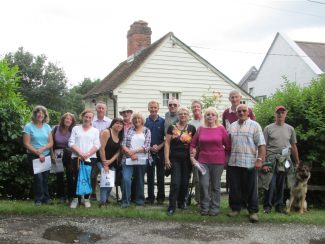 In what appears to have become a tradition, the sun obligingly appeared in time for our summer walk after 24 hours of inclement weather.   After last evening’s storm and this morning’s rain, we feared we may have to abandon our plans, but by 2 pm a group of fifteen keen walkers assembled in the car park near St Mary’s Church.

After introductions, including one lady on a visit from New Zealand, we set off down Old Church Hill.   Luckily, a few yards along, the gate on the right was unusually open, so we walked into the field beyond.  Although still a little wet under foot, we were able to admire the wonderful view of the London skyline in the distance and could even see across to Fords at Warley.   With some reluctance we left this beautiful scene to continue on our way.

Our next stop was the churchyard of the old St Mary and All Saint’s Church, which stretches surprisingly further behind the church than can be seen from the road.  Now feeling very warm in the humid heat of the afternoon, we spent half an hour in the neat but semi-wild graveyard that surrounds the old church which is now a private residence and grade 11 listed building.

Turning into the lane at the side of the church we stopped in front of Hall Farm Cottage, a very old quaint looking white wooden building.  Timing couldn’t have been better, because the owner arrived in his car and was happy to answer some questions and gave us a little information about the building.  The cottage had been built in 1760, it has a wooden framework and has needed substantial maintenance over the years.  I asked if it would be okay to take a photograph.  He not only agreed to this but kindly took the photo himself of the whole group of us standing in front.

We were unable to walk any further down the lane to the Langdon Hall Farm as the gates are kept shut, so at this point we debated whether to attempt a long walk further down the hill to where the Army Camp had once been.  Accepting the climb back up the steep hill would be hard, the vote was nevertheless a unanimous ‘Yes’, so off we went.

From the entrance, we could see part of the original perimeter fence with its posts with curved tops that were once connected by barbed wire and with the aid of an ‘overlay’ map, we could see a ‘now and then’ plan of the area.  Although the buildings are long gone, some of the original roads within the camp remain as does the parade ground which is now partially covered by small industrial units.

The return walk was at a leisurely pace, with stops to admire the Old Rectory and one or two other fine looking houses that have the added attraction of wonderful views from their south facing back gardens.  We arrived back at the car park at 4:15, ready for a rest and a cold drink.  The afternoon had been a great success, in jovial company and thankfully very good weather.