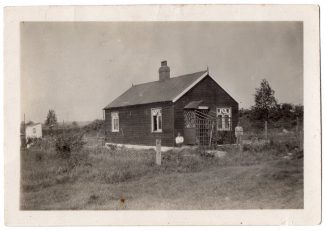 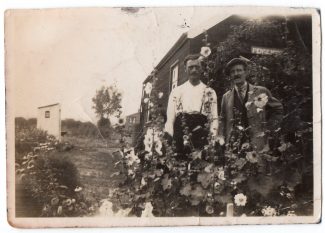 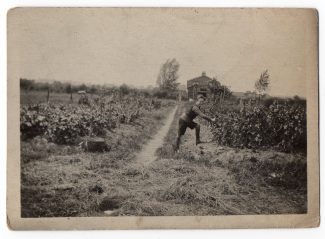 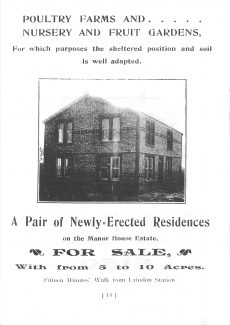 I have written previously about my maternal grandparents’ plotland bungalow ‘Pendennis’ in Alexandra Road, Laindon.   I’d now like to add a couple more photographs taken in its early days before the wooden building was rendered and pebble dashed. My Grandfather, (Henry Richard Devine) is sitting by the front door and my Uncle Richard (Dick) is on the right.  The outside privy can be seen on the left. This photo was taken by somebody standing in the unmade Alexandra Road.  My Grandfather is on the left in this second photo with an unknown visitor. I notice the name ‘Pendennis’ on the front door, a garden had been established and also that the whitewashed ‘privy’ had a window.  The farmhouse can be seen in the far distance at the end of Pendennis’ long garden.

The back garden of ‘Pendennis’ led to the semi-detached farmhouse, Sunnymead and South View. This third photo gives a better view of the large back garden (my Uncle Dick doing some gardening). There appears to be a wooden shed at the far end, slightly obscuring the view of the farmhouse. The farmhouse was part of land agent, Thomas Helmore’s ‘Manor Estate’ as featured in a leaflet published approx. 1904/06 called ‘Manor House Freehold Building Estate’.  I feel the advert’s claim of ‘Fifteen Minutes’ walk from Laindon Station’ was slightly ambitious unless you were a speed walker!