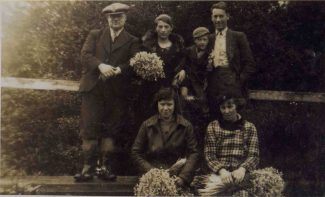 zoom
Happy days before the war - springtime 1939. Bluebell picking in Dunton Road, Laindon. My mum Jessica in the back row. Her cousin Tom in the wellies. Dennis in school cap next to Uncle Dick. Front row, Aunt Kath on right, Tom's wife Flora on left. I think my Dad, George took the photo. I note the huge bunches of bluebells that have been gathered. The picking of wild flowers is now strictly prohibited of course.
Nina Humphrey 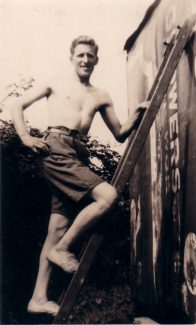 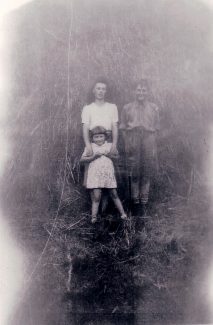 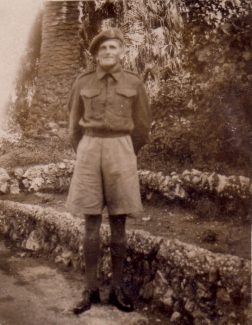 zoom
My Dad, George, in the botanical gardens on Gibraltar 1943.
Nina Humphrey. 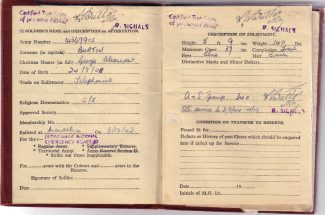 zoom
Dad's army book showing the date of his enlistment. (They managed to get his date of birth wrong - he was born on Christmas Eve 1908).
Nina Humphrey 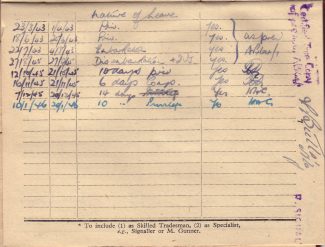 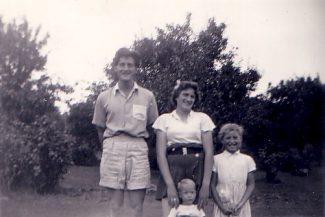 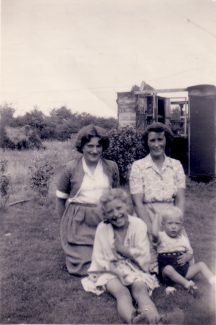 zoom
The remains of Dad's walk-in rabbit shed in the background. Me front left with brother Alan. Sister Anne behind me with our Mum, Jessica. 1954.
Nina Humphrey 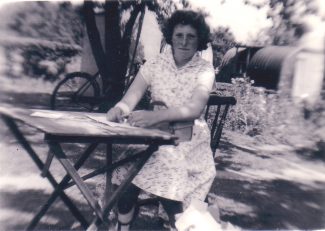 zoom
Me on my 12th birthday, July 1958, with Anderson shelter behind me on the right, being used as a shed.
Nina Humphrey

When my 79 year old brother Dennis was admitted to hospital early in 2010, his short term memory wasn’t what it used to be and he had to think carefully when asked ‘what day of the week is it’ or ‘how old were you on your last birthday’!  However, when the Doctor asked him ‘Do you remember when the  war started?’ without hesitation Dennis replied “3rd September, 1939, I was 9 years old,  Mum had started dinner and had sent me out to Dad’s vegetable patch to dig up a few new potatoes.  As I came into the kitchen, the news was announced on the wireless”,  he could have gone on and on as his memory of that day was crystal clear, never to be forgotten.

Apparently, the Anderson shelter that was soon installed in the garden of Spion Kop where we lived in Alexandra Road was a primitive structure with a couple of deckchairs and became waterlogged when it rained. Our Grandparent’s shelter nearby at ‘Pendennis’ was a little more robust and was fitted with bunk beds.

Our father, George, worked nights so when the air raid siren sounded, my mother had to get Dennis and baby Anne to the shelter.  Dennis, being a very heavy sleeper, always pleaded with her to let him stay where he was, but she insisted he get dressed, while she saw to the baby.  However, after quite a commotion, he announced that he couldn’t move.  Mum discovered that in the complete darkness he had mistaken a jacket for his trousers and forced his legs into the sleeves and was completely tangled up.

In the late evening of 21st September 1940 an unexploded parachute mine dropped in a field not far from our bungalow.  The green parachute was still attached and partly buried. Local families were evacuated for a few of nights until the Army came to dispose of it by detonation on 27th September 1940. My Nan (Jessica Devine) told me how they had to sleep on mattresses in the hall at Laindon High Road School, but were kept awake by somebody’s grandfather who snored loudly. After the detonation, apparently my Dad had to climb on our roof to remove a few clods of earth and grass. Many windows in the area were shattered, including one of ours although my brother told me it had already been a bit loose. A very deep crater was left which filled with water and at least one dog fell in and drowned because it couldn’t climb back out up the steep sides. My parents told my brother, who was 10 years old at that time, to stay away, but when they couldn’t find him after they returned from shopping one day, they walked across the field and found him at the side of the crater looking down. I don’t think my parents were impressed when he said he did it out of curiosity, in fact I think he received a good hiding.

Apparently, another mine landed in Dunton Road and hung either in a tree or on a lamppost. When two of my brother’s school friends went to investigate, it went off, killing both of them.

On another occasion, after a plane had come down around that area, my brother and his friend found a machine gun in the wreckage and took it home. My mother wasn’t at all pleased and told them to get rid of it, so they dug a hole in somebody’s back garden and buried it.

When the posters ‘Dig for Britain’ appeared, Dad did just that and dug an enormous vegetable patch.  He also began keeping, chickens and ducks for eggs, goats for milk and rabbits and a pig for meat.  He built a walk-in shed for the rabbits with hutches on each side.  He also built a hayshed with stalls attached for the goats. We became virtually self-sufficient.

Dad was a night supervisor at the international telephone exchange based in Faraday House, near St Paul’s. He continued travelling there and back every night throughout the Blitz, walking through streets with buildings on fire. The taps on our outside water tanks used to freeze in winter and Dad held a heated poker against them to thaw them out. My mum once told me that when the tip of the poker was red hot, Dad would go charging outside with it saying ‘where’s Hitler’. (In a jokey way of course – Dad was a gentle, kindly soul).

Eventually he was called up at end of 1942. He joined the Royal Signals and was stationed on Gibraltar for two years, a reasonably safe place to be at that time. He left mum with a shillelagh to keep under her pillow for protection just in case the Germans invaded while he was away. He told me that he enjoyed the boat journey there although many of the other recruits suffered terrible seasickness.  Once there, he also enjoyed the very hot weather, while some of the others were flaking out in the heat. On occasional trips into the sea, he remembered having to run like hell to the water because the hot sand would burn his feet.

Meanwhile, back home, the family were extremely concerned because my mother’s brother, Richard Devine (known as Dick) had gone missing. He  was captured in France and spent the next four years in a prisoner of war camp, leaving behind in Laindon, his wife Kath and their tiny baby daughter Toni.

While my dad was away, my mother needed to have an operation.  She was taken to Runwell Mental Hospital which had been seconded for surgical procedures as the general hospitals were obviously in demand for military purposes. She told me various stories of the mental patients she encountered, some of whom were quite endearing. During her stay, our grandparents looked after Anne while Dennis was allowed to stay in the bungalow on his own to look after the livestock. However, he arrived at Nan’s one day most distraught and rather tearful after discovering that our dog Toby had seen mum’s ducks on the pond and had killed them all. Not exactly the kind of news mum wanted to hear while recovering from surgery. She was more than pleased when allowed home to recuperate, although after the long walk home around the muddy boards in Wellington boots, she was ready to get back into bed.

When she could, as required in the war, mum worked part-time in the Broadway Radio Service shop, 2 The Broadway, known as “Edna’s”, where accumulators were taken to be re-charged.

The livestock kept her busy. She used a large old saucepan for boiling potato peelings and other vegetables. Mash was added to the mixture and then fed to the chickens. They also had to be supplied with ‘grit’ which they needed to form the shells of the eggs. I believe it came from Cramphorns and was made from crushed seashells.  When a chicken was required for dinner, its head was chopped off with an extremely sharp chopper. Then it had to be cleaned and plucked.  I can still remember my mum plucking chickens even in the early fifties, which involved dipping the dead chicken’s body into a bucket of boiling water, which apparently made the feathers come out easily, and then plucking the feathers individually. I hated the smell of the hot, wet feathers. However, there was nothing quite as delicious as chicken with roast potatoes for Sunday dinner accompanied by Yorkshire pudding and the sound of Family Favourites on the radio.

Dennis left school in the summer of 1944 when he was 14 years old and spent the first year working on Buckenham’s Farm, after which he moved on to other things.

In 1945, Nan arrived at our door in a very emotional state and needed to be supported by her daughter-in-law. As she collapsed into a chair my mum asked, ‘goodness me Mum, please tell me what’s the matter’, but Nan couldn’t speak. Kath calmly explained that a telegram had just arrived to say that Dick was coming home.  Nan had become completely overwhelmed with relief.

My Dad’s Soldier’s Service book records that he came home on 10 days leave in October 1945 – I was born 9 months later in July 1946. I’m not sure of the exact date he was demobed, however during the fifties, I remember his demob suit hanging in the wardrobe complete with trilby hat, which I don’t think he ever wore.  Hanging in the same wardrobe was my Mum’s real fur coat. Apparently very popular at that time, but again, I don’t remember my mum actually wearing it because it was incredibly heavy.

Although I was born after the war, it very much influenced the first ten years or so of my life. It was constantly talked about, stories exchanged, servicemen’s experiences passed around, many movie films were made usually starring John Mills, Alec Guinness, Brian Forbes and others. I remember feeling terribly moved when taken to see ‘Reach for the Sky’ in which Kenneth More starred as Douglas Bader.

The years may have rolled along but I believe us Brits are very good at ‘not forgetting’.  I particularly remember standing outside Buckingham Palace on 15th September 1990 for the Battle of Britain 50th anniversary memorial fly past, (which also happened to be our son Mark’s 19th birthday). The sight and sound of each amazing formation flying over London was awesome.

I feel it must be very difficult for today’s youngsters to understand or appreciate what their grandparents went through during those years because times have changed beyond recognition. That’s where this website comes into its own. The memories and stories of people local to the area are invaluable and once published are recorded forever piecing together a jigsaw of a time never to be forgotten.