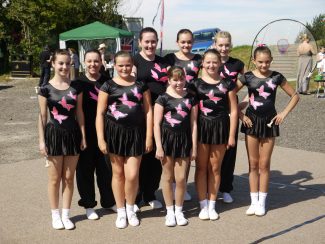 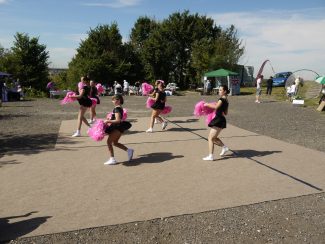 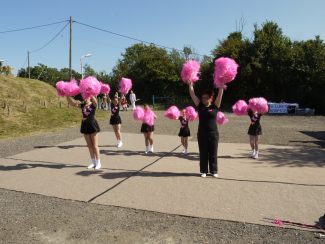 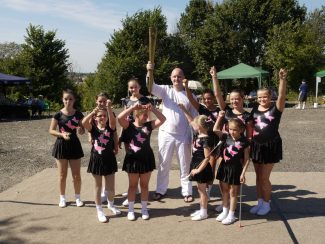 St Nicholas Church Laindon, every two years holds a two day flower festival which includes craft stalls and various forms of entertainment. In searching around for something different somebody mentioned the Laindon Suzettes Majorette Troupe. Well I had never heard of them and I was even more surprised to find out that they had been going for over thirty years and in that time had had a considerable amount of success at National level.

They did not let us down and performed on both days of the festival, there is no doubt we will have them back.

The following is their story: –

The Laindon Suzettes Majorette Troupe was formed in 1978 by the founder members Annah and John Ayres ( Basildon Drive , Laindon) along with Pat Coulson and Lynda Coulson – now Pilley.  The Troupe originally trained at the Laindon Community Centre in Aston Road, Laindon.

Ron Moorecroft was the caretaker at the time and helped the troupe with the hire of the hall and looked after the children with their snacks at break-time. When he died we had a trophy made in his name. This was won and retained by Michelle Fuller.

In the early days Lynda Coulson and Michelle Fuller were the main trainers. Pat Coulson and Margaret Fulker took control of the paper work and fund raising. A grant of £600 in 1986 from the Basildon Council helped them purchase new leotards and equipment.  In 1987 Margaret passed her exams to become a Judge with the United Kingdom Federation of Majorettes.

In 1998 they entered a float in the Basildon Council carnival and won the best float competition. The troupe went on to win several trophies at the United Kingdom Federation of Majorettes (U.K.F.M.) National Finals held at Camber Sands in 1989 and 1990 which also included the best overall troupe.

Lynda decided to retire for family reasons, so Michelle took over as senior trainer and with the help of Margaret and senior girls the troupe continued on its successful way.

The troupe moved to Bluehouse Community Centre following the Laindon Community Centre destruction by fire. Then in 2003 their 25th, anniversary Pat and Margaret initially decided to have a final reunion party and then close the group down but following an influx of new children they decided to keep it going.

Like any group, club members come and go. Michelle and senior girls retired, Pat unfortunately passed away suddenly, a great shock to all and was sadly missed.

Emily Williams age six in 2011 won a huge accolade as being chosen as Miss Mascot for the United Kingdom Federation of Majorettes. Chloe Andrews, 13 won the Miss Pre-Teen prize and gained the most points and prizes. The troupe as a whole won 21 first, 18 second and 19 third places.

Suzettes currently have a troupe of 20 in the main group and 10 in the beginners group and they train in all elements of baton twirling and Majorettes skills ie : Pom Poms, Ribbon baton, Hoop baton, maces, flags, big silk flags, and baton marching and manoeuvring. All these elements are taught by the trainers who volunteer their time twice a week for 4 hr sessions.

They go every year to the national finals at Camber sands and have won too many trophies to mention including individual trophies and are a well respected member of the U.K.F.M. They still train at Bluehouse Community Centre so if there are any young girls out there between six and nine who are interested, why not pop along, Margaret will be only too pleased to see you, or for more information, call 07743 592758.

They are a great bunch and Laindon should be proud of them.