You are here: HomenextPeoplenextWho?nextMystery Photograph 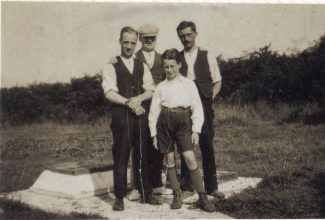 Standing on the right of this picture is my Grandfather Henry Devine (Laindon postman for 25 years) who lived in a bungalow called ‘Pendennis’ in Alexandra Road, which was part of the unmade section of King Edward Road, Laindon.  His son Richard (my uncle) is standing in front (later a teacher at Markham’s Chase School).  The two chaps on the left are cousins on a visit from London.  I estimate the photo was taken around 1930 but have no idea where the structure they are standing by was situated.  There were many wells in the area including our own but none had such a substantial cover.  Maybe it was a water inspection cover or even a cesspit.  Any help with identification as to what it was and exactly where would be greatly appreciated.