The Old Fortune Of War 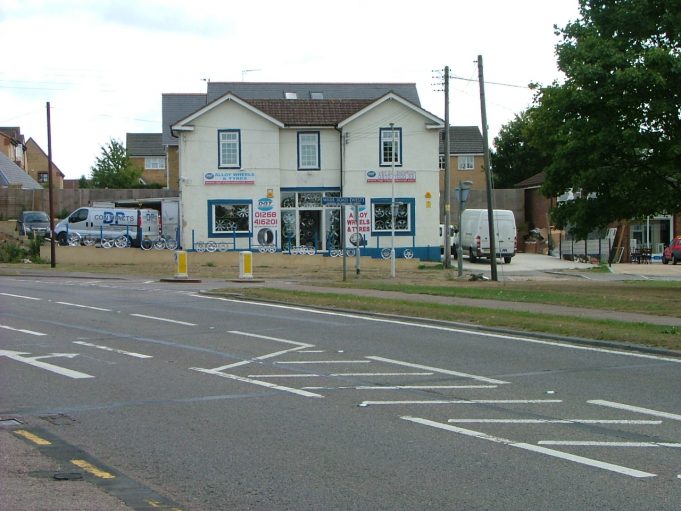 Situated at the junction of Noak Hill Road, Wash Road, Dunton Road and Laindon High Road; a spot once known as Laindon Cross. 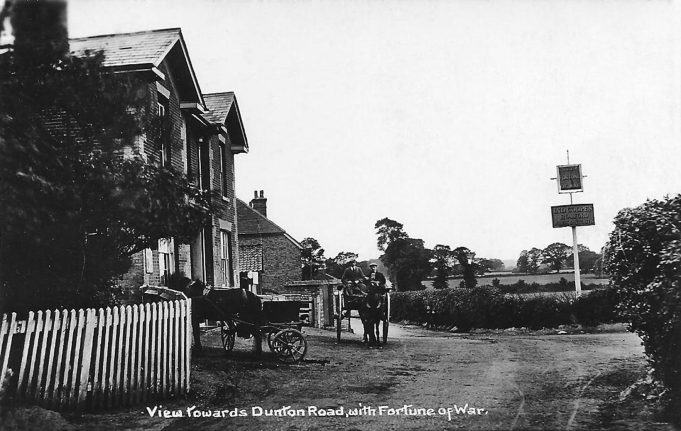 The Old Fortune of War when pints were available

The current building dates from around the late 1800s, although there was a previous building.

There are not many old buildings left in Laindon, but there is one that you cannot miss as you drive back from Billericay along Noak Hill Road and that is the building now on the junction with Laindon High Road North and Wash Road. It is currently the home of a business selling alloy wheels and tyres but it was one of Laindon’s oldest pubs before it closed its doors in the late 1920s following the opening of the New Fortune of War on the new A127 road to Southend. 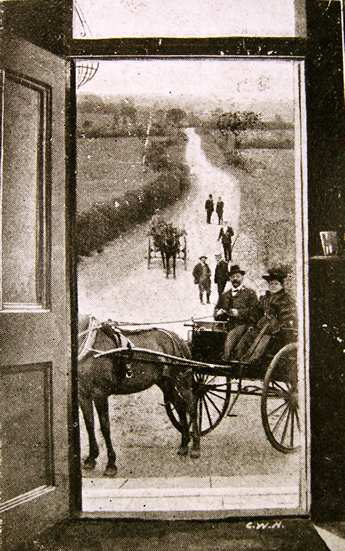 View from The Fortune of War pub, looking up Noak Hill Road.

It was the original Fortune of War, known by many as ‘The Old Fortune of War’ and before the realignmentof the roads, it was situated at the crossroads of Noak Hill Road, Wash Road, Laindon High Road and Dunton Road; the spot known back in the middle 1400s as Laindon Cross.

In 1907, R.A Beckett in his book “Romantic Essex” wrote ‘Although thehouse in recent years has been rebuilt, itis an old place’ . When he visited the Fortune of War the local Laindon Festivities were going on in the field opposite, an annual event but like many pleasure fairs, it had shrunk in size. The hunt still met at the old house and if any hounds or horses were not fit to hunt they were kept in the stables.

Laindon was only really made up of small hamlets before its development in the 1900s. However if there ever was a village, the most likely spot was Laindon Cross.

Although I believe The Fortune of War dates  back to the middle/late 1700s the earliest recorded publican I can find is Edward Miller, 1828. In 1841 Mary Bishop took over and living at the pub was Henry Hollowbread who in 1845 became the landlord for the next ten years. It was also the local Post Office, during his time.

There were a number of publicans over the next fifty years and then in 1910 Mrs Mary Adelaide Wade took over from her deceased husband. Although she was the landlady, it would appear that in 1913 she either employed or leased The Fortune to Sarah Davis. 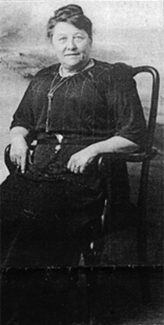 Sarah Davis of the Fortune of War

Sarah had been successfully running two pubs in Poplar, East London – the Earl of Ellesmere and the Lord Raglan but with six children to bring up after the death of her husband she decided to move away from the smoke and bustle of London and look for another pub in the country.

She found what she was looking for in the well-established Fortune of War at Laindon. Sarah not only ran The Fortune but also served the drinks and cooked the meals. During the First World War, fourteen engineers billeted in the pub’s billiard room and she cooked for them as well. The Fortune was one of the first places in Laindon to have gas, but it still had primitive earth toilets.

One of her children, Violet, was only nine at the time they moved to The Fortune but she remembered with affection the close knit community. The village policeman rented one of the nearby cottages for four shillings a week, while others paid three shillings and six pence.

Violet also remembered the summer day-trippers who used to swarm down in charabancs on their way to Southend; tucking in to her mother’s generous Ploughman’s Lunch of bread and cheese and onion or delicious ham.

So Violet was surprised when her mother wanted to move on because it was too quiet for her. They moved to The Bull at Dagenham but Sarah could not settled so she moved the family back but this time not to a pub but to Whelps Farm with livestock, land and stables.

We know that Frederick Tubb took over as Landlord of The Fortune in 1917; I assume Sarah continued to run the pub as before until she left for Dagenham in 1922.

The Fortune of War closed in 1928 when the New Fortune of War pub opened on the north side of the A127 by the Junction with the High Road. It then became known as the Old Fortune of War, it continued as a café for a short time then a printing company took it over and now the business is Alloy Wheels and Tyres.

At least it is still there.