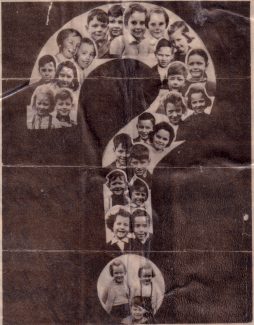 zoom
Why so many twins?
Nina Humphrey (née Burton) 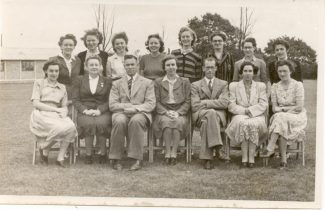 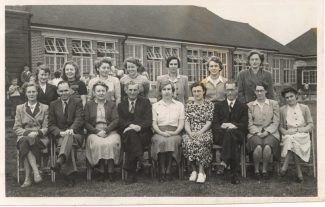 There were 14 sets of twins in our school and a set of triplets.  I remember the day the photograph was taken in 1956/7.  There was obviously something different going on and I watched the twins being called in turn.  All but 2 sets appear in the picture, which was arranged in the shape of a question mark to depict the curiousity as to why there were so many.  The only set I can fully name are Norman and Rosemary Whitehead, because they were my neighbours. They are the second set at the start of the question mark, top left of the picture. The two girls at the very top are Elaine and Helen?, who lived in a turning off King Edward Road. I clearly recognise and remember many of the others, but unfortunately cannot recall their names.

The two photographs of teachers are from the early fifties and include my Uncle Richard Devine who left the school in the summer of 1957 to take a teaching position on the Isle of Wight. Those I can name are:

Also can anyone name the others?