You are here: HomenextBuildingsnextShopsnextA surfeit of butchers in Old Laindon

A surfeit of butchers in Old Laindon

More detail of the Laindon Butchers 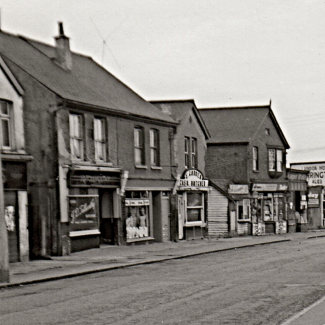 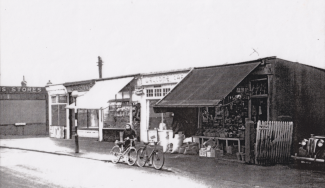 zoom
The shop with the white awning appears to be another butcher. Do you remember which one?
David Merchant

The rival butchers shop to the north of Tollworthy’s in the picture was that of Eustace Godden who was, I believe an East Ham man, doing business there before moving to Laindon to open the shop in Laindon. Certainly, Thomas Vickery (my maternal grandparent) knew him well and Lizzie Vickery (née Pryor) patronised his shop, the Pryors having a reputation for meat eating. Lizzie’s youngest sister, Ada, who remained living in East Ham until shortly before her death in her late nineties told me she always “had a good joint at the weekend”, despite the fact that, never having married, she lived on her own. Not much hope for vegetarianism there!

When, during WW II, we kept rabbits, Eustace Goddard would always give us a good price for a carcass or two, so it is clear he was still in business despite the severe restriction on the availability of meat during the period of harsh rationing. In 1941 an order went out that butchers were to be closed on two of the shopping days per week to preserve stocks.

Another rival butchers to Tollworthy to the south in Laindon High Road was Lagden’s on the opposite side of the road. Shortly after WW II I was witness to the fact that, in a shed at the back of his shop, accessed from Windsor Road, a beast was slaughtered. Whether this was legal or not, I do not know.

As the article says, there was no shortage of butchers in Laindon, since there was a butchery department at the retail shop of the Grays Cooperative Society which was on the corner of Worthing Road. Other names to be recalled in the butchery business were Sizer, Gatley and, of course Buckenham who had two shops in Laindon. I believe there was also a butchers once in the Nightingale Parade of shops in High Road, Langdon Hills but the name cannot be recalled without further research.

In the “Recorder” of 14th May 1941: “Overcharged on Dripping, Laindon Butcher’s Manager Fined. Employed as manager of a butcher’s shop owned by Mr. Buckenham, Horace Steel of High Road, Laindon was summoned at Billericay Police Court for two offences of selling dripping at a price above the maximum controlled price of 6d per lb. He pleaded guilty. Prosecuting on behalf of the Billericay Food Control Committee Mr. Bestley said Steel should have known of the order as it was made 12 months ago in April 1940. The maximum controlled price of dripping was 6d per lb” Apparently, Steel was caught selling dripping to one customer at 1/- per lb and to another at 6d for half a pound. Presumably these customers had been sent into Buckenham’s with the express purpose of catching the manager out, which clearly they did, since he had told them both “not to blab” which, of course they did! Steel’s excuse was that, as the meat ration that week was only “1/2d worth” (viz.one shilling and two pence worth per head, meat remained rationed by its price throughout) and the hind quarter he had received was “very fat”, he had felt justified in stripping off the fat for dripping and selling it off as an item “off ration”. Shades of Jones in “Dad’s Army”. Steel was fined £3 and ordered to pay 15/-each expenses to the witnesses and a further two guineas advocates fees.