You are here: HomenextBuildingsnextShopsnextThe Henbest Family 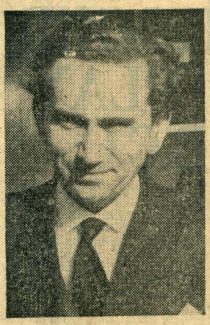 Mr Allan Charles Henbest, of Pasadena, Berry Lane, Langdon Hills, died on 9th January 1956 aged 69.  Many tributes were received describing Mr Henbest as a ‘very pleasant man’ and ‘one of the best’.

Among the many mourners were:- Mrs Maud Henbest (widow), Mrs Joan Davies and Mrs Mary Baldry (daughters) and Mr Allan Henbest Jnr (son, who had taken over his father’s business in Laindon High Road in 1947).  Mrs Maud Henbest had retired at the end of 1955.

Mr Henbest Snr had been born in Holborn 1886.  The 1911 Census shows him aged 24 living in Shacklewell Lane, N E London with his parents and younger brother Arthur.  Described as ‘a cutter’ in the tailoring industry, he married Maud Catherine Prior in Hackney 1913.  Daughter Mary was born in Hackney 1914, daughter Joan in Grantham 1919 and son Allan Arthur Henbest in Willesden 1922.  The family moved to Laindon when Allan Jnr was a few months old.  The 1929 Electoral Register shows the family home in Oak Lodge, Helmore Crescent and their business premises in Laindon High Road (Tel: Laindon 16).

Mr Henbest Snr was a founder member of the Laindon Chamber of Commerce which had been formed in 1928.  At the 1931 Annual Meeting the number of members were reported to be 38.  Mr J G Cottis was re-elected Chairman, Mr E Turner succeeded Mr A C Henbest as Hon. Sec. and Mr Polden was appointed Treasurer.  Mr Henbest was later appointed treasurer in 1951.

Mr Henbest Snr had been a keen member of the Laindon Horticultural Society between 1938 and 1955 and received a presentation upon retirement.  He had also been treasurer of Laindon Community Association.

Allan Henbest Jnr was educated at Laindon High Road School and Chelmsford College.  Upon completing his studies, he joined his father’s business.  At the onset of WW2 he joined the RAF and served 5 years with Bomber Command in England and during operational flying in the Middle East was a W-O Air Gunner.  He was demobbed in 1946 and took over the family business in 1947.

He was actively connected with the Laindon Community Association which was formed in 1952 and was the first Chairman.  At one time a keen cricketer, pressure of business limited his outside pursuits to motoring and gardening.  Married in 1945, he met his wife Sybil while she was on special duties in the W.A.A.F. often plotting the course of her future husband’s aircraft.  The 1949 Electoral Register shows their address as 5A Dorset Parade, Laindon (flat above the shops).  Their three children are Julie, Andrew and Wendy.  By 1953 Allan and Sybil were living in ‘Pasadena’ Berry Lane and Allan and Maud had moved into the flat at 5A Dorset Parade.   In 1956, Allan and Maud were living in ‘Pasadena’ and Allan and Sybil were living in ‘Caledonia’, Stacey Drive, Langdon Hills, Tel No. Laindon 3000.