You are here: HomenextBuildingsnextShopsnextBroadway Radio

Memories of my days in Laindon 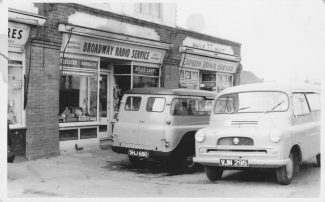 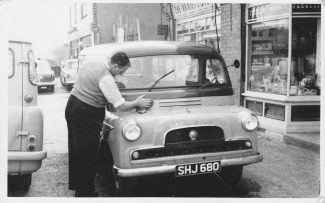 My thanks to Eric, Gloria, Richard and Nina for their replies, to my first note. They have evoked many memories.

To Eric Pasco: No, I didn’t realise you were married to Sue Hewett, but perhaps I should have done. Your name was familiar to me – but it took my sister Christine (Chris) to place you as having married into the Hewitt family. We appear to have lost touch with them, and they with us, so perhaps it is time to say hello once again? (I’ve asked the Editor if he will kindly forward my email address to you.)  Chris still lives in the Gosnells/Armadale area (in fact, in Martin) while I am now in Gosnells (at the Thornlie end) – but enough of this because it will mean nothing to those not familiar with Perth and its suburbs.

When we arrived in Laindon in 1951 (and yes, Nina, we did buy our shop from the Willis family) the shop next to us (which became The Variety Stores but may then have had a different name) was the same internal size as our own.  That’s to say, the actual shop took up the front third to one half of the ground floor, the rest being either storerooms and/or family living accommodation.

As I think I said before, the Darroch family arrived some time after us (at a guess, in about 1953-54?) but soon started turning their small shop into the emporium it eventually became. First, they opened up the rear of the ground floor and later installed a new internal staircase for customers to access the top floor. By the time we left in 1963, I think most of their shop was actual shop, with just a small storage area at the back of the top floor. They also had an exterior staircase installed in their back yard, I assume for fire safety reasons. They were able to do all that because, only a few years after they arrived in Laindon, they bought a modern house in Billericay and then lived there, so their shop (unlike ours) was from then on just a commercial premises. Does anyone know how long the Darrochs continued trading at that shop after we left Laindon in March 1963?

My parents sold our shop/property to the Basildon Development Corporation, as I think most Laindon traders were doing, or thinking of doing, at that time. In fact, if it hasn’t already been written, there’s a whole story to be told there by someone about the commercial effect the opening of the Basildon New Town (and it’s London-based discount stores/traders) had on nearby village shops and businesses. I guess Laindon was just one of those “villages”, and ours but one of those businesses.

Looking back now, I can see and appreciate what I didn’t understand then, being only 17 in 1963. In the 12 years we lived in Laindon (1951-63) the mid-late 1950s was a time of rapid business expansion and (for our business and family at least) small scale prosperity, assisted by the end of wartime rationing and the rapid roll-out of TV – plus the amazing (for new TV sales) boost of the Coronation in 1953. That was followed in the early 1960s by a business decline (in “old” Laindon) that was as rapid as was the rise in the 1950s.

On quite a different note, Richard (and maybe Nina) will perhaps know about the chap who used to stand at the corner of Nicol Road and High Road almost every weekday evening, from memory between about 5 pm and around 8 pm. Especially in winter, my parents would often invite him over to the shop to offer him biscuits and a cup of tea. Only some years later (and I don’t know where this info came from, but it was probably my parents) was I told he was a bookie and that he was there each evening to take bets, in what was apparently an illegal activity at that time (the form of betting?). I have no idea of this man’s name but he may be known to anyone who was living nearby in the fifties…

Nina’s comment about the Broadway Radio Service charging accumulators also took me back to the rear of our shop, where the sheds at the back of our small yard were dominated by the large charging machine(s) to which the various accumulator batteries were linked for overnight charging. There were also some pretty foul-smelling and nasty chemicals (including hydrochloric acid, I think) stored and used by us as part of the charging process, before accumulators went out of style, initially to be replaced by very large and heavy batteries. I can still remember that early (so-called “portable”!) radios had both a high and low voltage battery, with some of them as high as 120 volts DC – which I know from experience can give you quite a jolt if you happened to put your fingers or hands across one. One of my jobs when serving customers was to test the voltage on their old batteries to see if they needed a new one. If you weren’t careful with the test leads you could get quite a jump from the connection – assuming the battery still had some kick! The most popular brand of battery we sold was “Vidor” – with “Ever-Ready” a close second.

Having just had one installed at a friend’s place here in WA, I can also remember going out with my father when he installed new TV aerials (usually lashed around chimneys) during the heyday of the new TV era in the 1950s. Unlike him, I have no head for heights, but can still remember clearly how I used to stand on the ground and freak out as I watched him climb the ladder up the side of a two (and occasionally three) storied house, only to then see him throw a long and heavy “duck board” from his shoulder onto the roof. He would then push the duck board up to catch over the roof gable before clambering out around the eaves and up the duckboard until he could then walk or slide along the roof to the chimney stack. Once there, he would set about custom-making the lashing (and his lashings were extremely well made!) to fit each chimney – before asking me to climb the ladder with the newly assembled aerial (we call them “antennas” here in OZ). As you will see from the above photograph, my father was not of a very athletic build – but that detail never stopped him from accessing a high and/or steep roof as if he was born to the task!

That moment when he finished making the chimney lashing was always the worst point of the exercise for me, because I had then to go to the top of the ladder – but with only one hand for me when personal comfort dictated that I needed both of them to hang on! Problem was, my other hand would be clutching the ungainly (though not heavy) new TV aerial, until I could hand it up to him as he sat on the sloping roof tiles -  often set on quite a steep angle.  I was always glad when he came down from the roof and the “aerial” bit of the installation was over. However, that was always preceded by me having to watch the new TV and call out to him (when the best picture was found) as he sat on the roof twisting the aerial one way or another to find the best reception.

By contrast, the bloke who installed the new antenna for my friend the other day just whipped a small calculator-like machine from his pocket and, moments later, the aerial (antenna) was perfectly aligned to the transmission mast! That’s progress for you!  And because most Australians still live in what you call “bungalows” (even though ours are usually much larger), he wasn’t even THAT far off the ground!

Another memory came from reading Gloria’s comment about her mother buying records from our shop. When we took over the business it was all 78 rpm records, plus frequent changing of the needles needed to play them (the needles were sold in tins of several hundred – and lasted no time at all!), while more than a few records would get chipped or broken even before they were sold. Then (mid 1950s?) we started selling “long playing” (33rpm) and “singles” (45rpm) in the new vinyl format – and they are probably the records most of us remember. The Beatles were only just getting started as we closed our business, so I missed the Swinging Sixties entirely, except here in OZ… With those vinyl records came new “sapphire” needles that lasted and (such a blessing!) auto-changing record mechanisms, so you could set up and play a pile of records without having constantly to attend to them. It seemed like “progress” then and it was – while only now can we see how it was all still a VERY long way from today’s iPods…

Gloria also mentioned the shop owner (who she thinks) told her off for playing under the bridge to King Edward Terrace. I think that would most likely have been the shoe shop owner – not least because my father would have looked a bit of a hypocrite telling off kids for doing that when his own son was (in the day!) one of the worst offenders… I can remember many happy play sessions down, in and around “the ditch” (as we called it) with the Darroch boys and others who lived nearby. Occasionally, we even used to walk through the ditch tunnel where it went under King Edward Road – but that involved a much longer “stoop” than simply going under the narrow bridge over the footpath onto King Edward Terrace – and King Edward Road almost defined the limit of our play area, in that direction anyway. In the early 1950s most of our play attention was centred in the bushes up Nicol Road and its cross streets (all unmade then), where many bush camps and dens were set up and later knocked down as part of the “cowboys and indians” games we used to play.

Coming back to the Willis family for a moment, I seem to recollect that they (or was it their children?) also came out to Perth to live, some years after us. As I recollect, when Sid Willis and his wife moved away from the shop they bought a house in St Nicholas Lane, near the primary school I later attended – which was still there and going strong in 2005. The Willis family who later moved to OZ were living at the first house in King Edward Terrace when we left the UK, and they had a daughter called Edna.

Does anyone also remember Mrs Hill, who lived in the very first house in King Edward Road (on the LHR school side) during the 1950s? She and her two daughters, Margaret and Sylvia, became good friends with my parents, while Mrs Hill had a leg amputated (was it diabetes or cancer?) at some point in the years when we knew her. I think Margaret later became a teacher, while Sylvia, who was younger than me but older than my sister, used to take my sister for walks when she (Chris, my sister) was very young and in a pram. That would have been between 1953-1955, but our two families remained friends until we left the UK in 1963.